The 1,150-mile Florida Trail gets a bad rap. Sure, hikers have to slosh through swamps, endure rubble-strewn road walks, and constantly scan the path for alligators and venomous snakes. But as you skip through shiny new shopping malls to boggy wetlands, wide-open bike paths to electric blue springs, and towering pine forests to fresh Florida subdivisions, I promise, boredom is never an option. If the Appalachian Trail earns its reputation as the “green tunnel” for its monotonous mountain scenery, the Florida Trail is an ever-changing carousel of adventure, a flashing chyron of breaking news, a whipping roulette wheel of opportunity and despair. In other words, it’s a whole lot of fun. 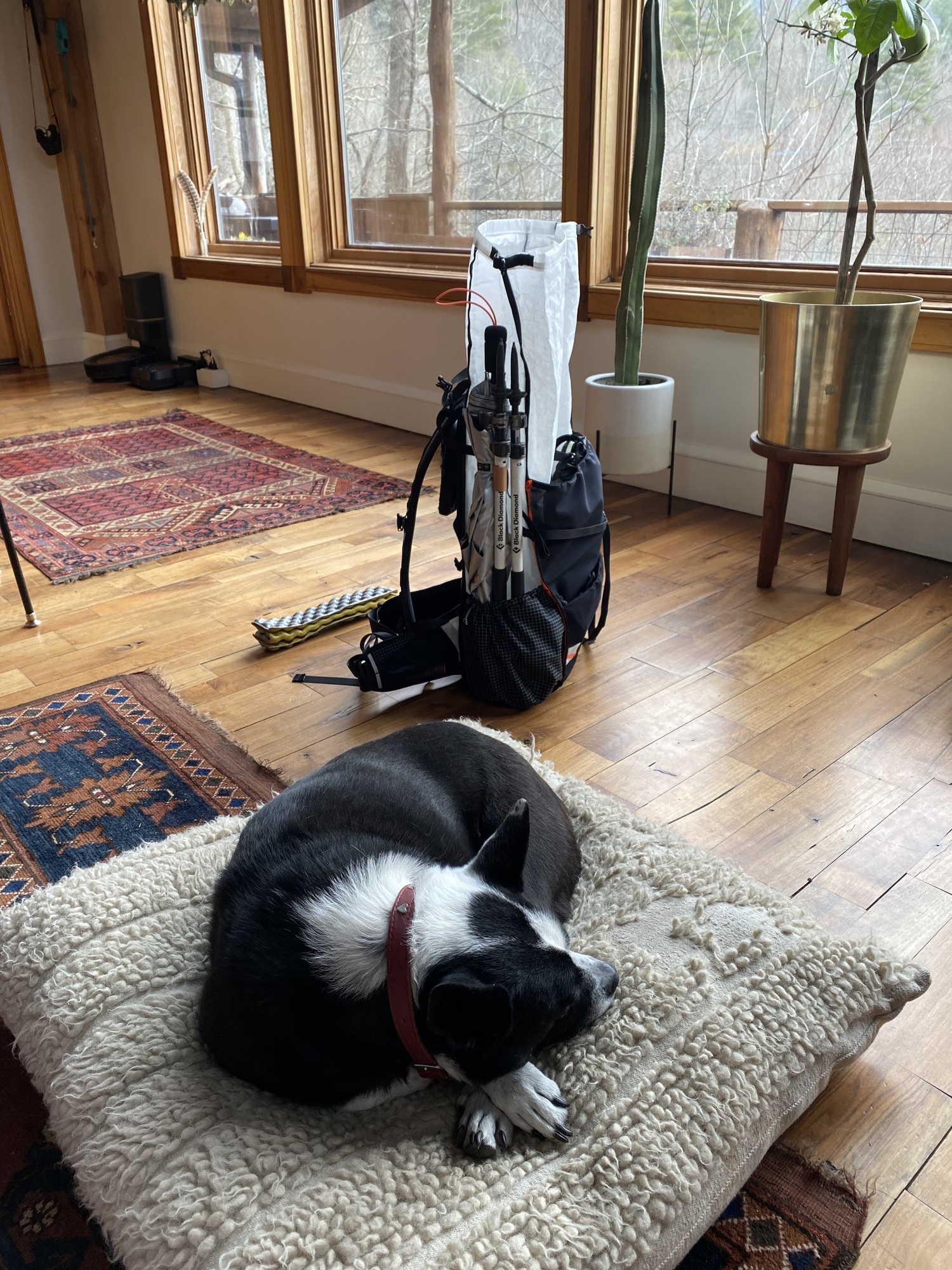 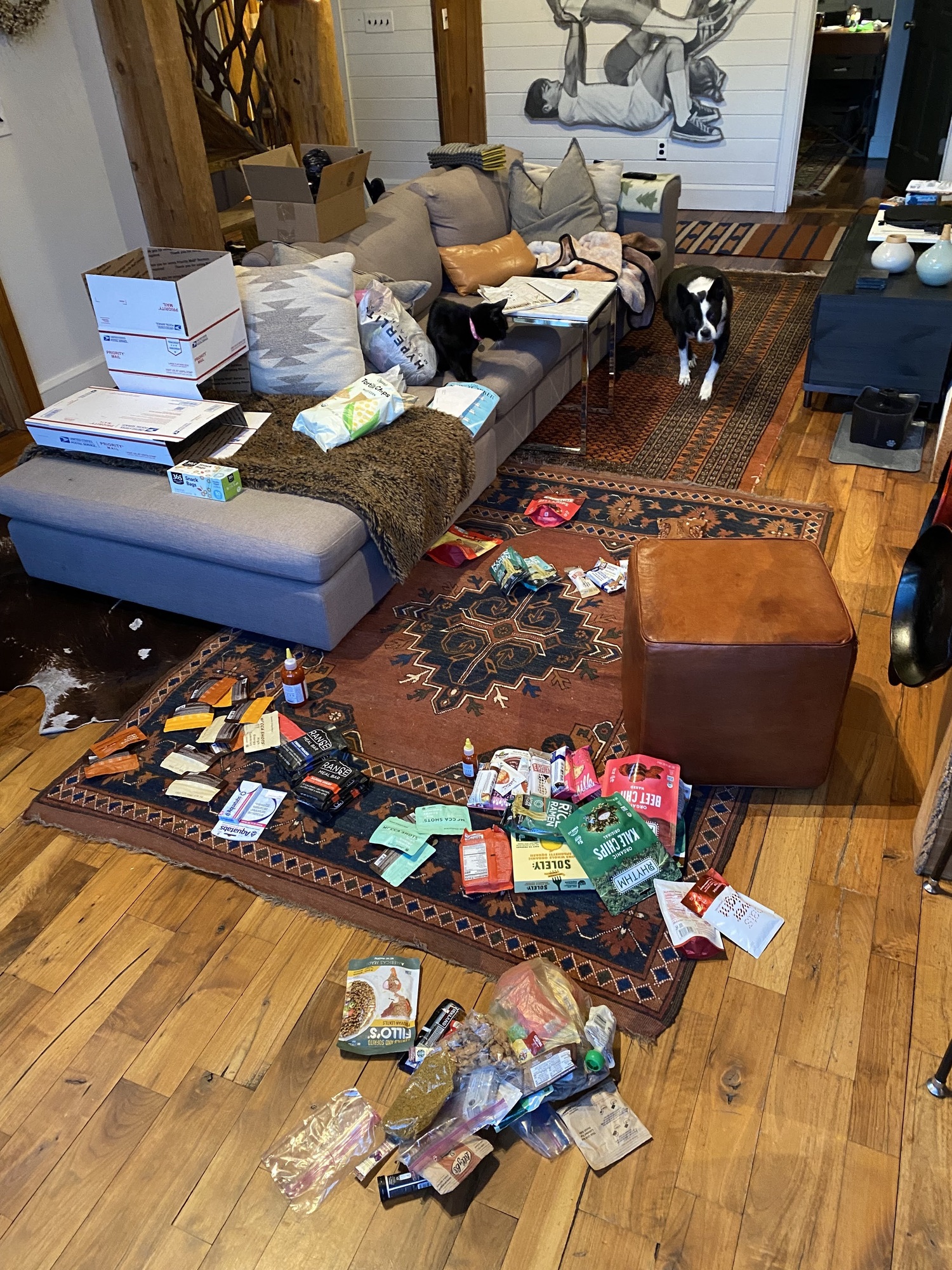 Like the Appalachian, Pacific Crest, and Continental Divide Trails, the Florida Trail (FT) is one of 11 National Scenic Trails that run throughout the United States. That means it’s protected by federal regulation, administered by the National Park Service (NPS), and offers significant natural and cultural history. Established in 1966, the FT spans the length of the state, with the southern terminus outside of Miami and the northern terminus near Pensacola Beach at the edge of the Florida panhandle. Roughly 200 hikers attempt to thru hike each year, though the Florida Trail Association says that number is growing. If the AT, PCT, and CDT are its popular long-distance cousins, the Florida Trail is the weird kid in the corner, working on something awesome or quietly plotting revenge.

The reason for so few thru hikers? Well, much of the Florida Trail is underwater. In fact, the first 30 miles northbound are completely submerged. This slog-fest travels through Big Cypress National Preserve, a rain-fed freshwater swamp, home to the highest concentration of orchid and fern species in the United States and one of the last unbroken habitats for the Florida Panther. It’s the wildest and most remote point along the entire trail, and it happens almost immediately. 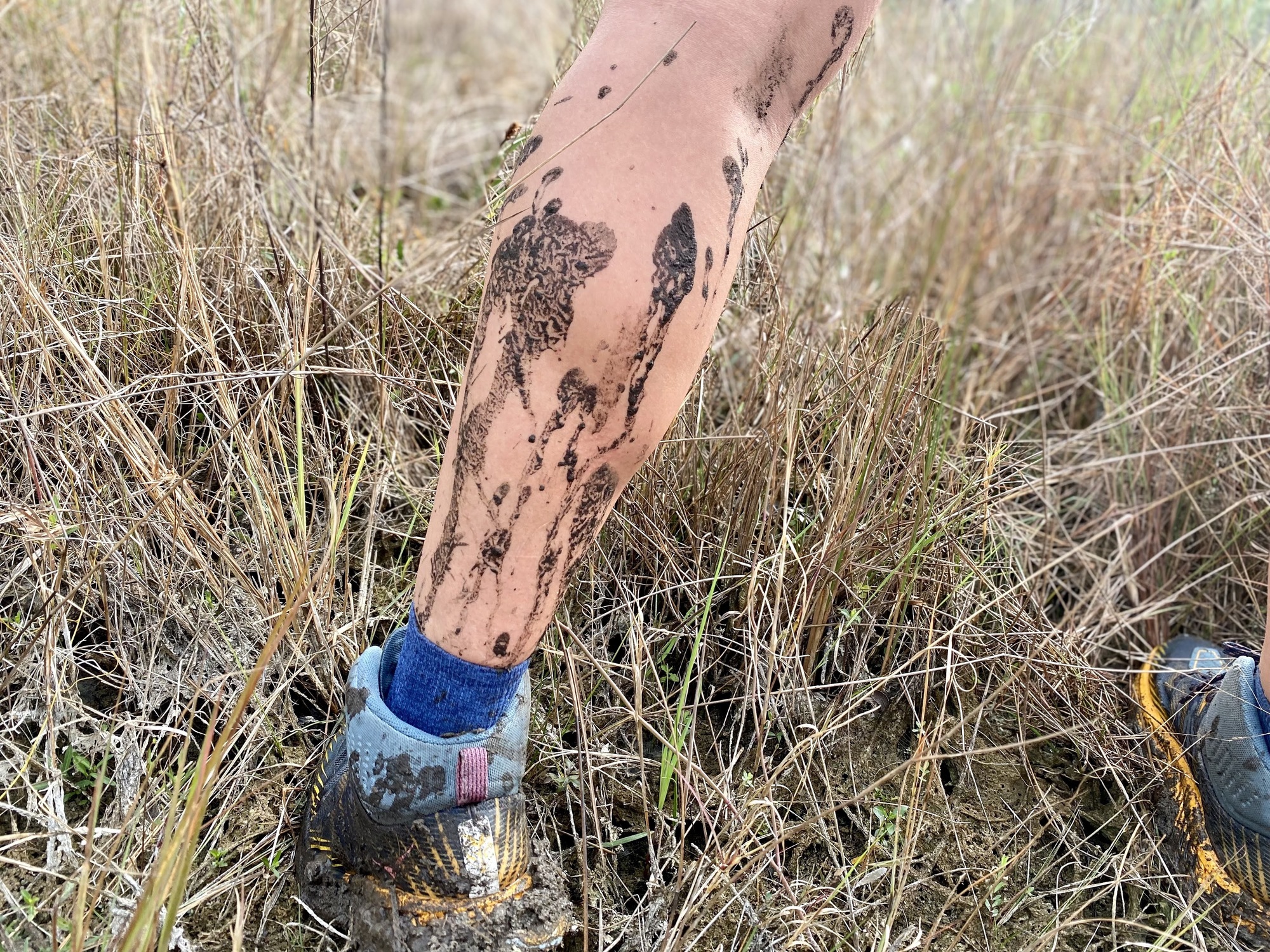 With both the AT and the PCT under my belt, I headed to the FT from my home in Hot Springs, North Carolina, a small Appalachian Trail town nestled in the Blue Ridge Mountains. On my planned departure date, however, a massive snowstorm dumped 6” of powder in the mountains and buckets of rain along the Florida coast. It was my first time planning a winter thru hike and a strange juxtaposition to consider warm-weather gear during a snowstorm (you can see my gear list HERE.) 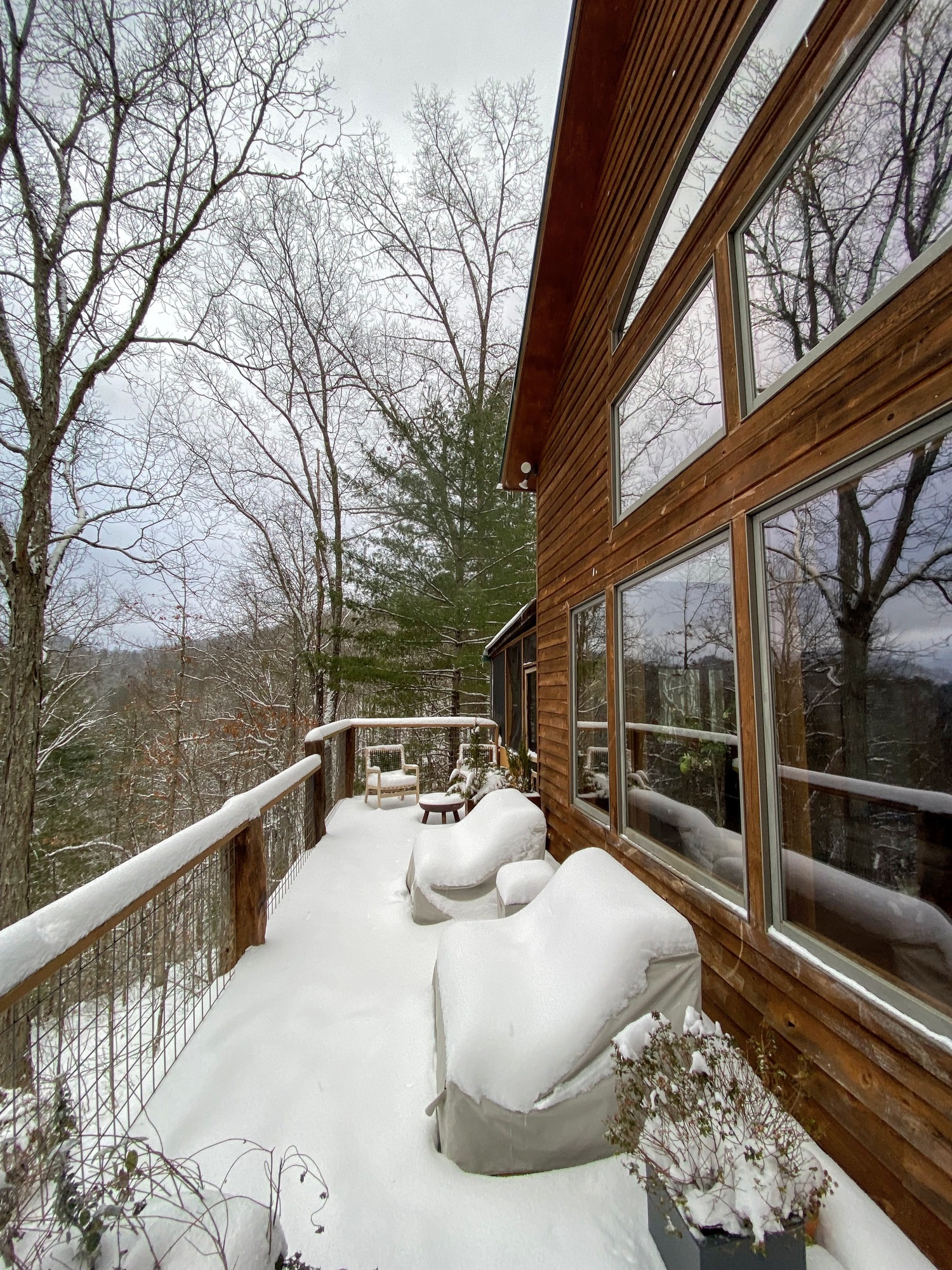 Not a good day to start a long trail.

I left a few days later, starting January 21 at the Oasis Visitor Center, home of the trail’s southern terminus. Of course, it began raining immediately. I quickly noticed the diversity of wildlife that would come to define this trail: alligators, herons, bugs, and large fish all splashed in the small waterway adjacent to the trailhead. And, within a few short miles, the trail plunged into the wetlands of Big Cypress. At first, I thought the comments on FarOut might be overblown, so I tried an elaborate series of hiker-meets-ballet moves to avoid the mud pits and solution holes (fractures in the limestone layer, often disguised underwater, that can be several feet deep.)

But when the trail suddenly turned into a river, there was nothing left to do. The next two days were unlike anything I’ve ever experienced—and I am an avid outdoors-person and third-generation Floridian. My pace, usually a zippy three to four miles per hour, dropped to one, and that was only if I was working really, really hard. My feet, shins, and even my knees were submerged in cold, gray, sole-sucking (soul-sucking?) mud, which zapped my energy and made every step not only a motion forward, but also up and out. There are three rest points along the 30-mile Big Cypress route, spaced roughly 10 miles apart. Drinking water comes, well, directly from the trail. Many hikers camp at at least one of these dry spots, but they are also frequently used as bathroom facilities and shared space with snakes, bugs, and any other critters looking for respite from the unceasing water. I did not camp at any of these island oases. 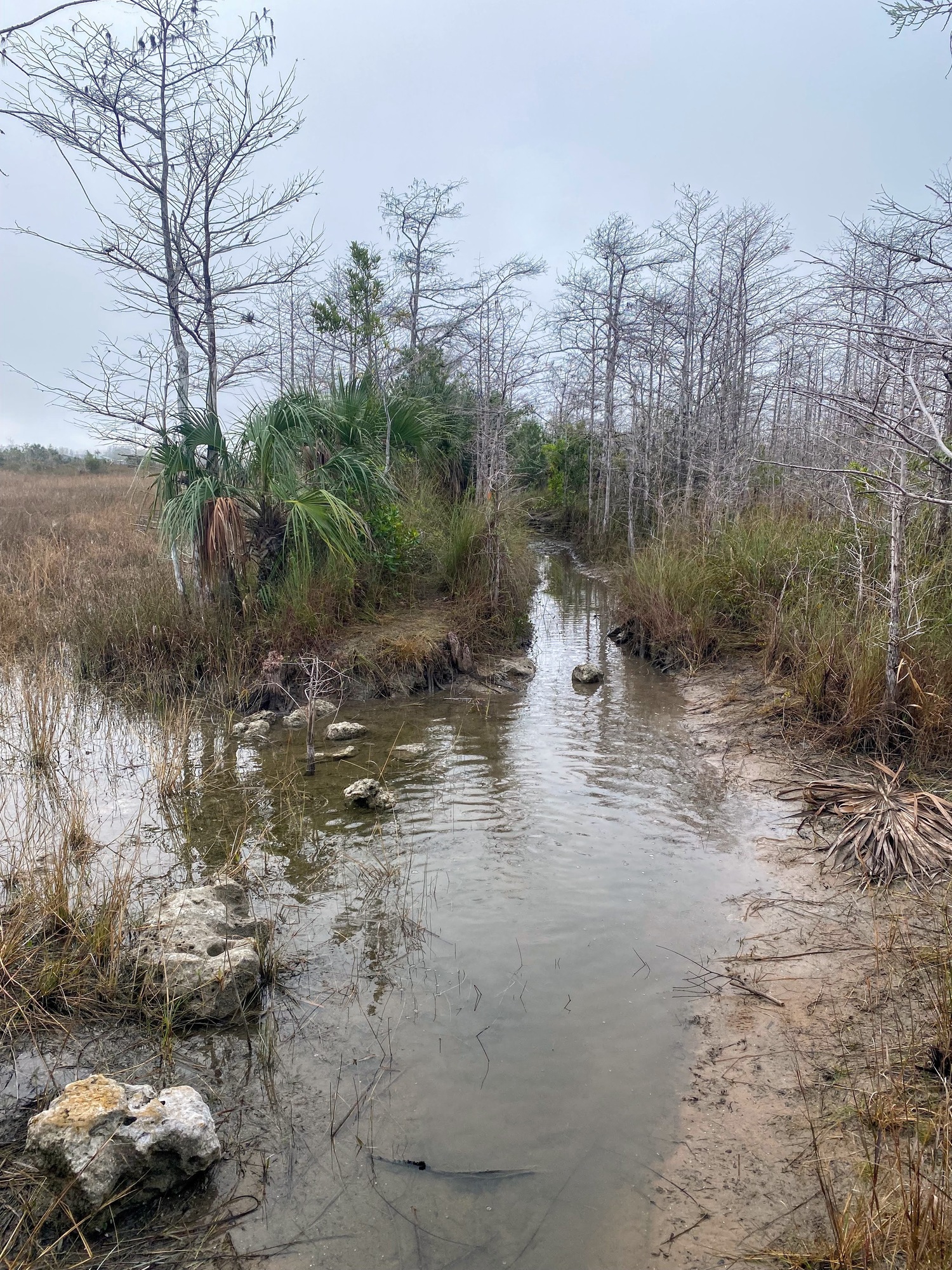 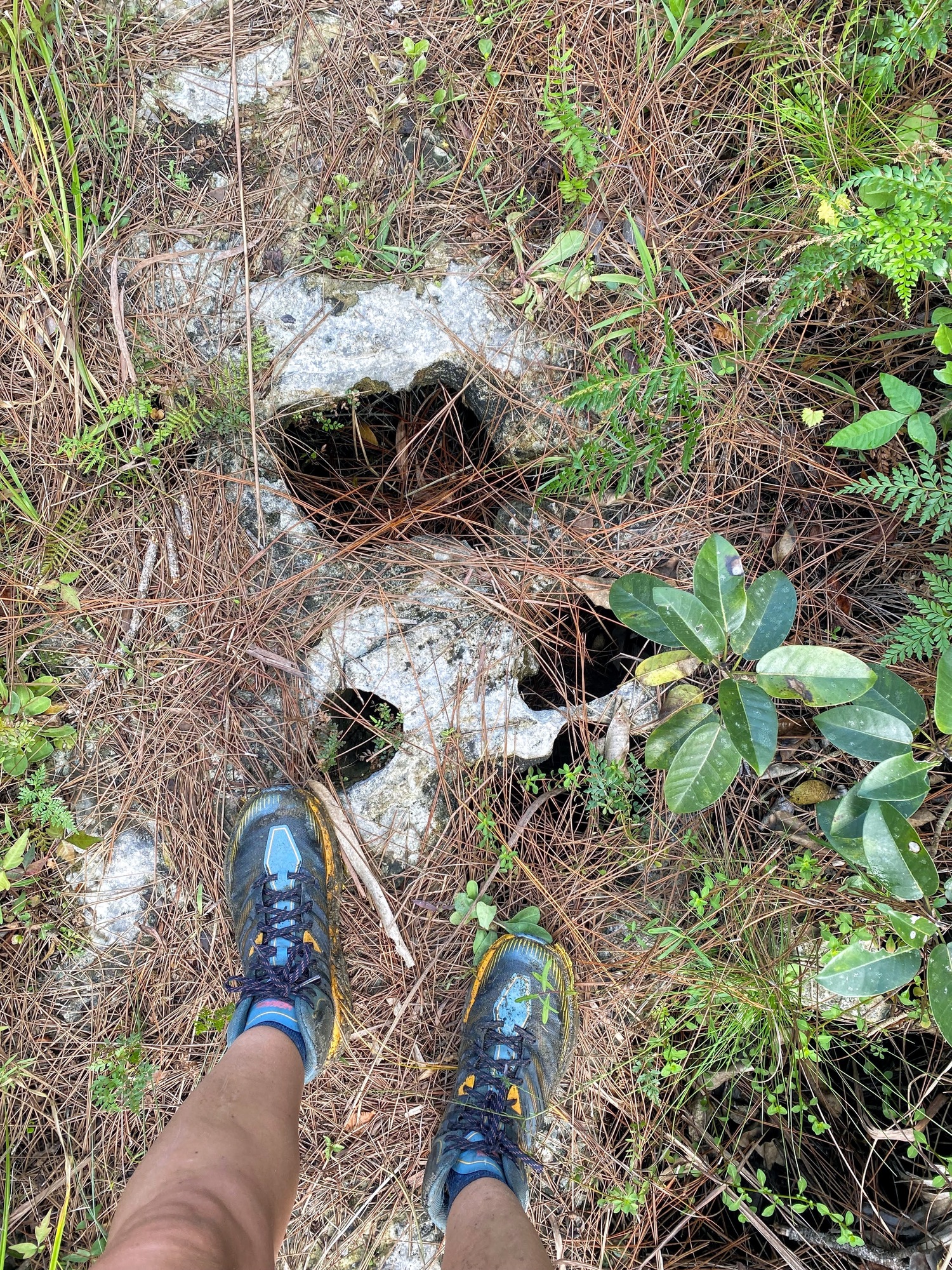 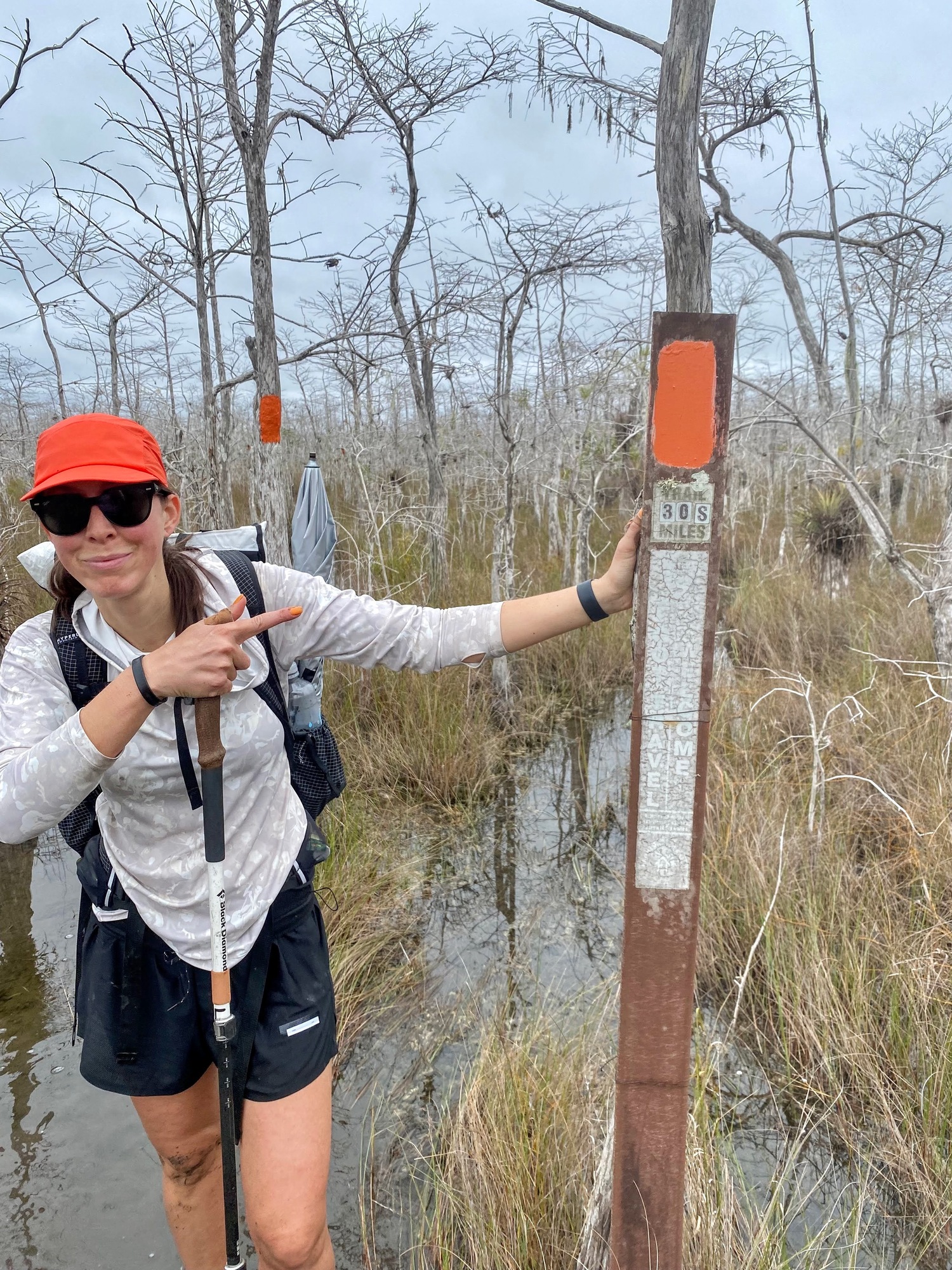 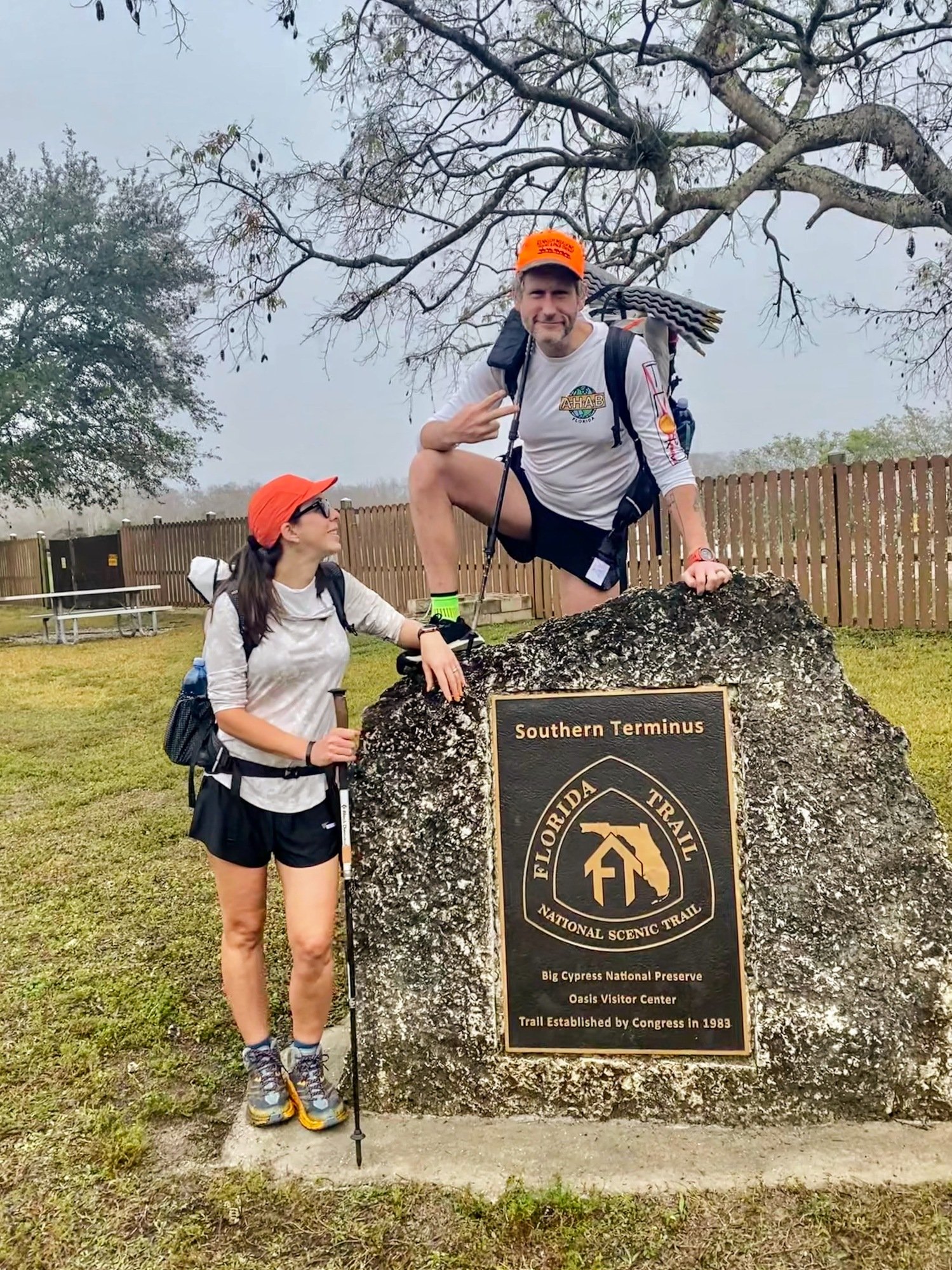 It’s always nice to have a hiking buddy. Blaze orange hats are a necessity during hunting season.

The difficulty of this section is muted by the absolute alien beauty of the swamp, a place that feels unfathomably distinct from the nearby metropolis of Miami. You can sense deep, primordial time here, a feeling closer to moving through remote jungle or the striated layers of the Grand Canyon than airbrushed South Beach. You may see another person, or you may not. I met four other thru hikers clustered at Thank God Island, but otherwise, I didn’t see another soul for two days. Compared to the clogged terminus arteries of other long-distance trails, seasoned thru hikers will appreciate the way the swamp culls the weak (and new hikers will earn some serious credit by defeating it.) 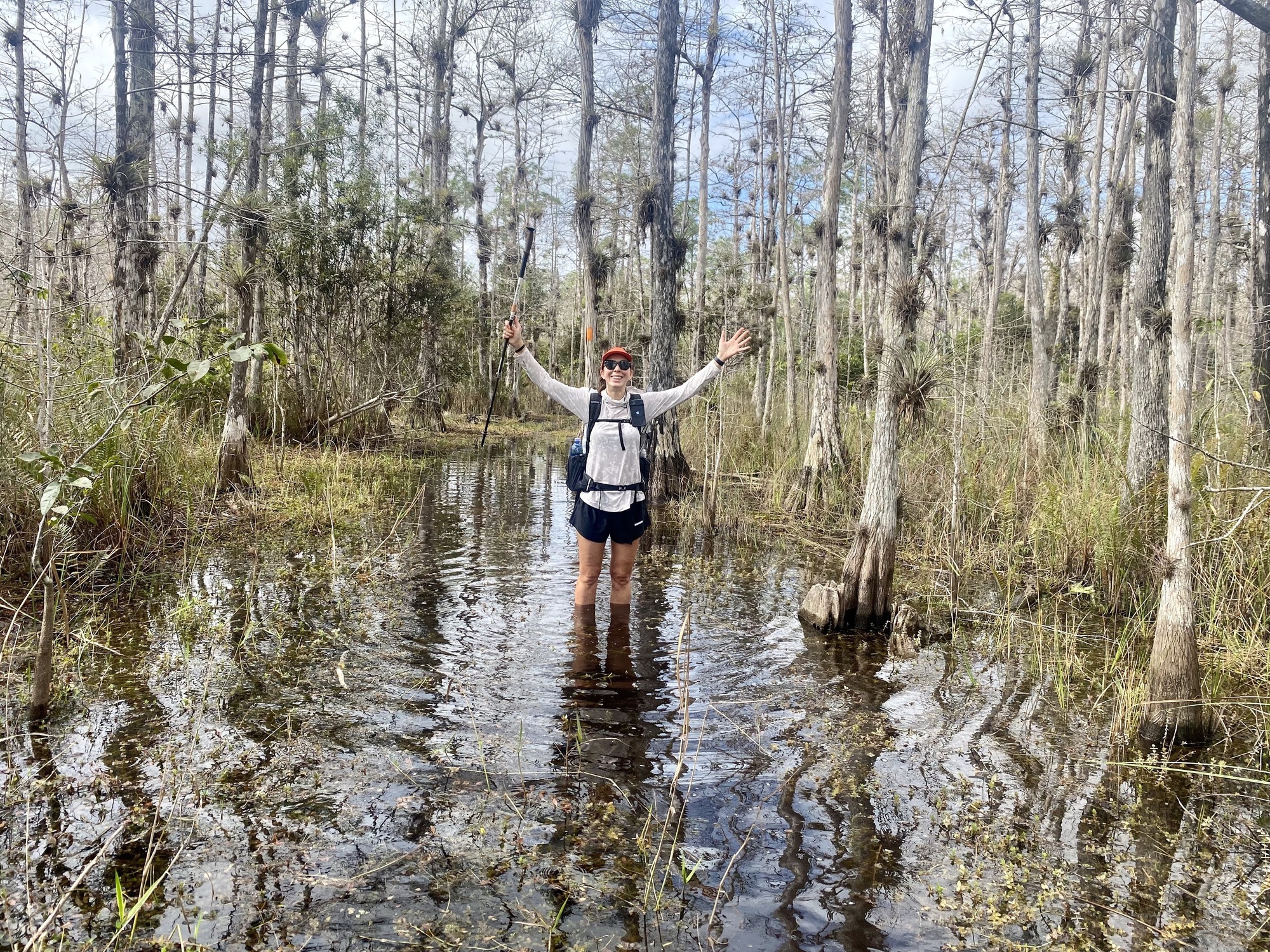 Conveniently located at the end of the swamp walk is another kind of oasis—a designated Interstate 75 rest stop, complete with covered picnic tables, bathrooms with running water, charging outlets, and even a snack machine or two. I ditched my “swamp shoes” (trail-worn Hokas), wrung out my socks, and happily collected the fresh pair of kicks I had stashed. Since this area is so accessible and close to the terminus, it’s easy to make a post-Big Cypress plan with yourself or a partner. There’s no camping immediately available at the rest stop, but I traveled about 100 yards away and pitched my tent on the grass near a bike path. I saw others sleeping in the adjacent parking lot.

After the swamp, the trail quickly transitions into Seminole land. There are regulations about camping and hiking after dark in this section of trail; please respect them. After a quick and rainy lunch stop, I saw the COOLEST THING EVER: A FLORIDA PANTHER! Only 120 are known to exist in the wild, and I was within a stone’s throw. The cat, which was lazily following a hedgerow across the street, was muscular but sleek, outrageously tall, with paws the size of bread loaves. The lanky, casual stride and oversized mitts reminded me of a mall-walking teenager. Seeing the panther felt like a true gift, as well as a reminder of how wild this place once was and still can be. Even with 400 miles of road walking, the FT still boasts the greatest concentration and diversity of wildlife I’ve seen on any long trail. 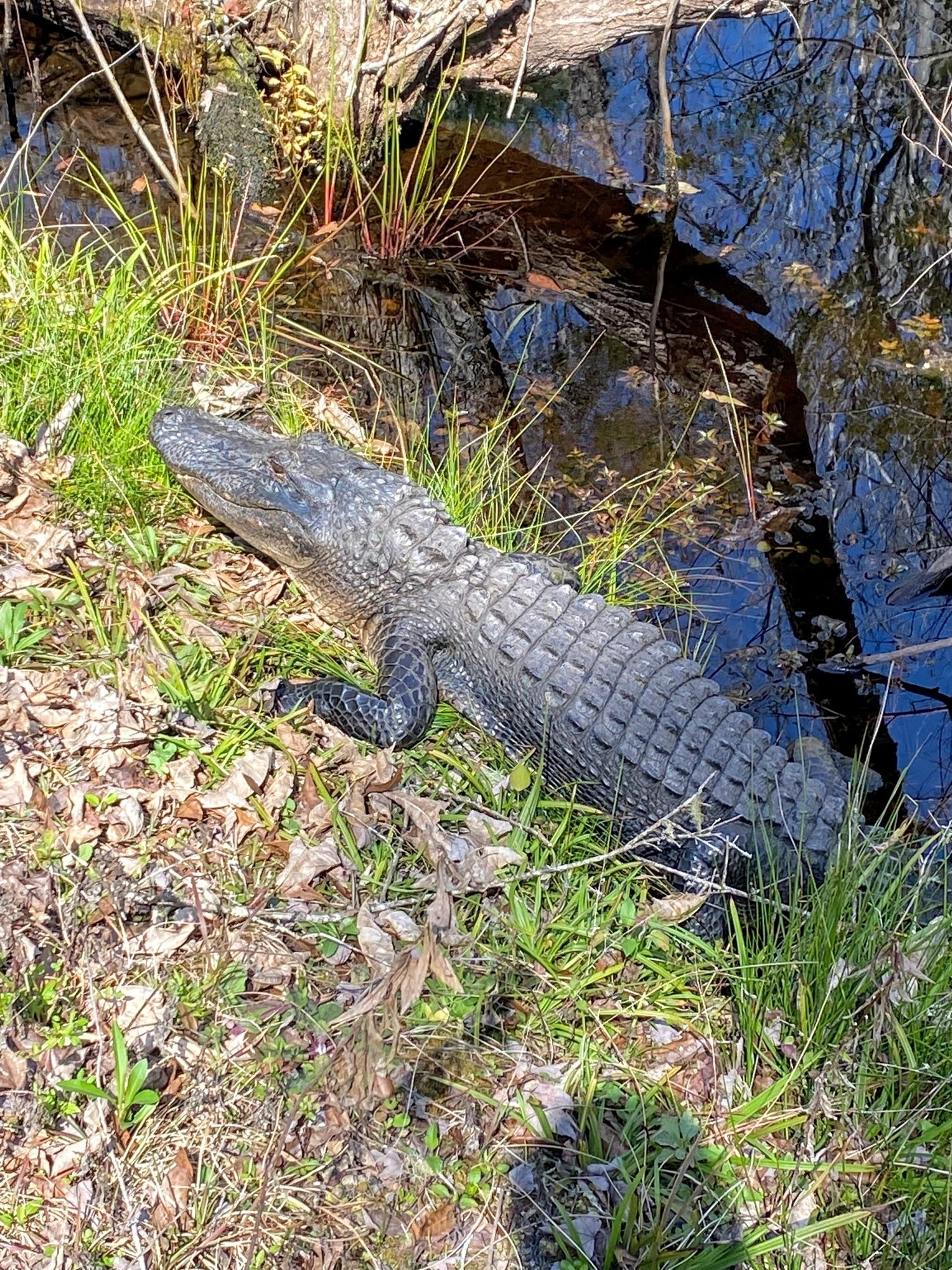 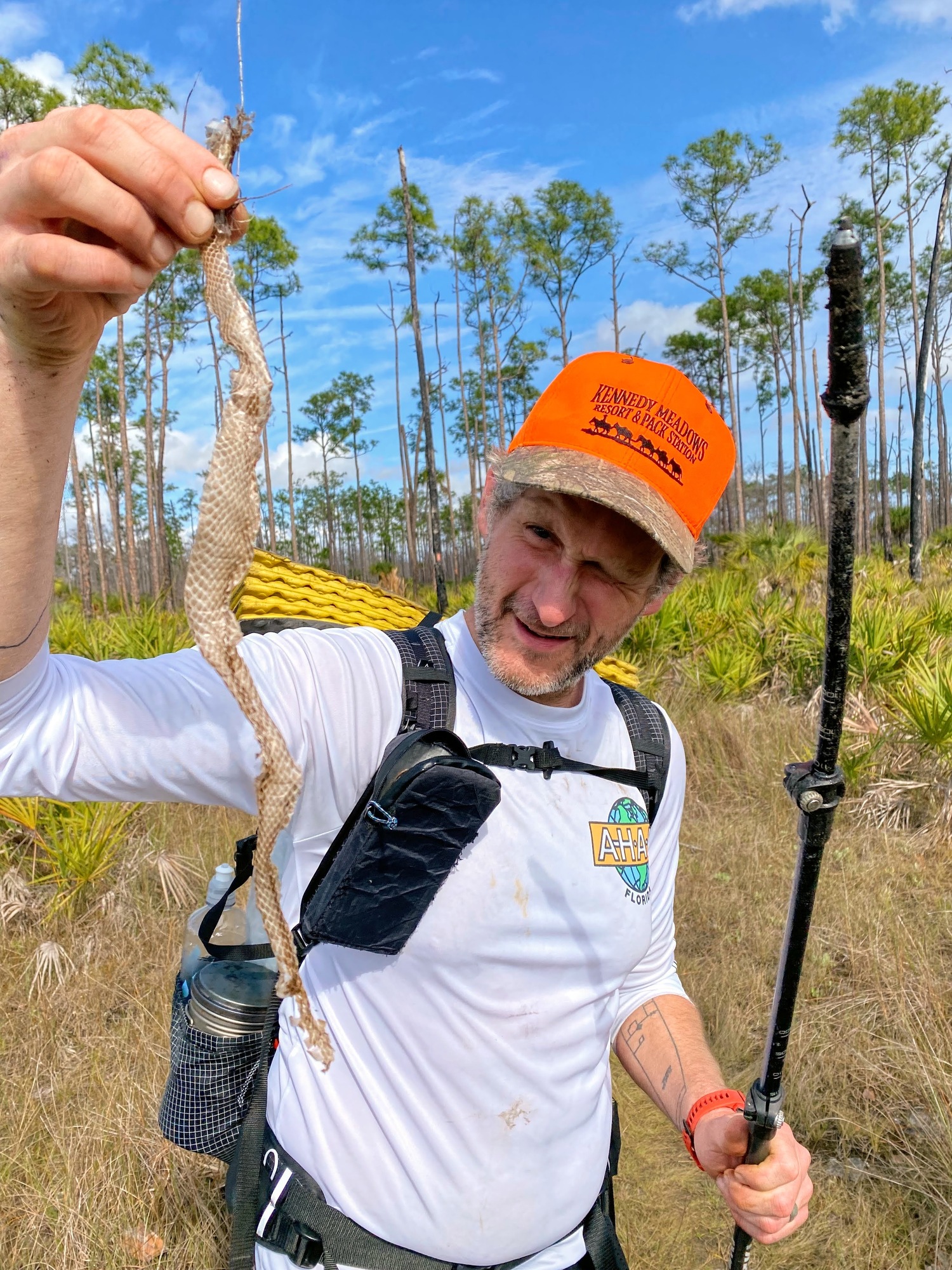 After passing through Seminole land, the FT follows a series of levees, all of which are perfectly flat. Hikers should be prepared to see live animals, dead animals, and alligators. Lots of alligators. My time on the levees was very cold. Nights were always below freezing, and several times the temperature dipped below 25 degrees. And, in the oddest twist of fate, water sources are limited, so hikers should plan to rely on water caches and/or water carries of up to 20 miles at a time. Once you hit Lake Okeechobee, you’re nearing West Palm Beach and Orlando’s southernmost sprawl and things become easier. Camping, however, becomes a little more difficult. Be discreet—if in doubt, arrive after dark and leave before dawn. 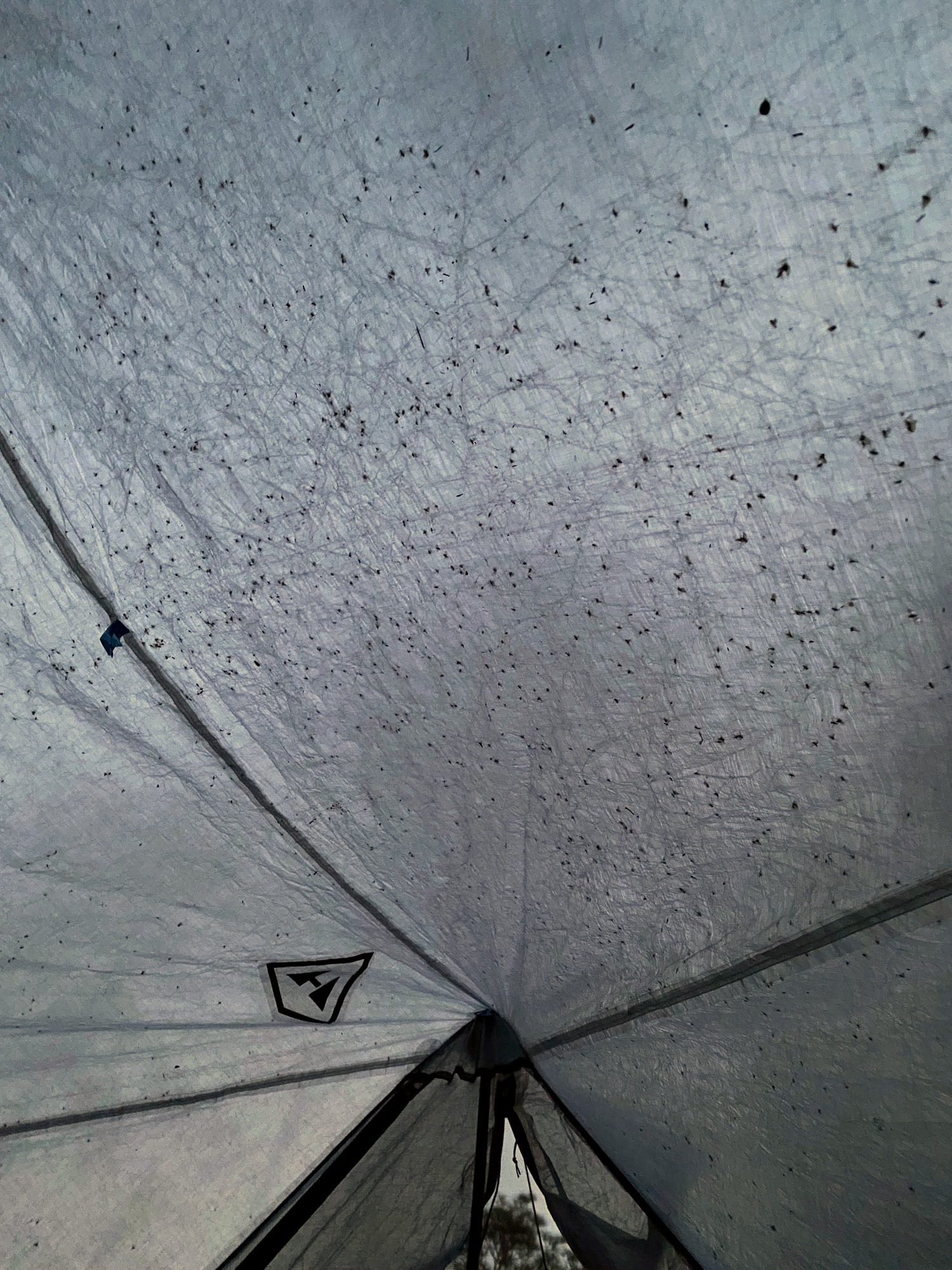 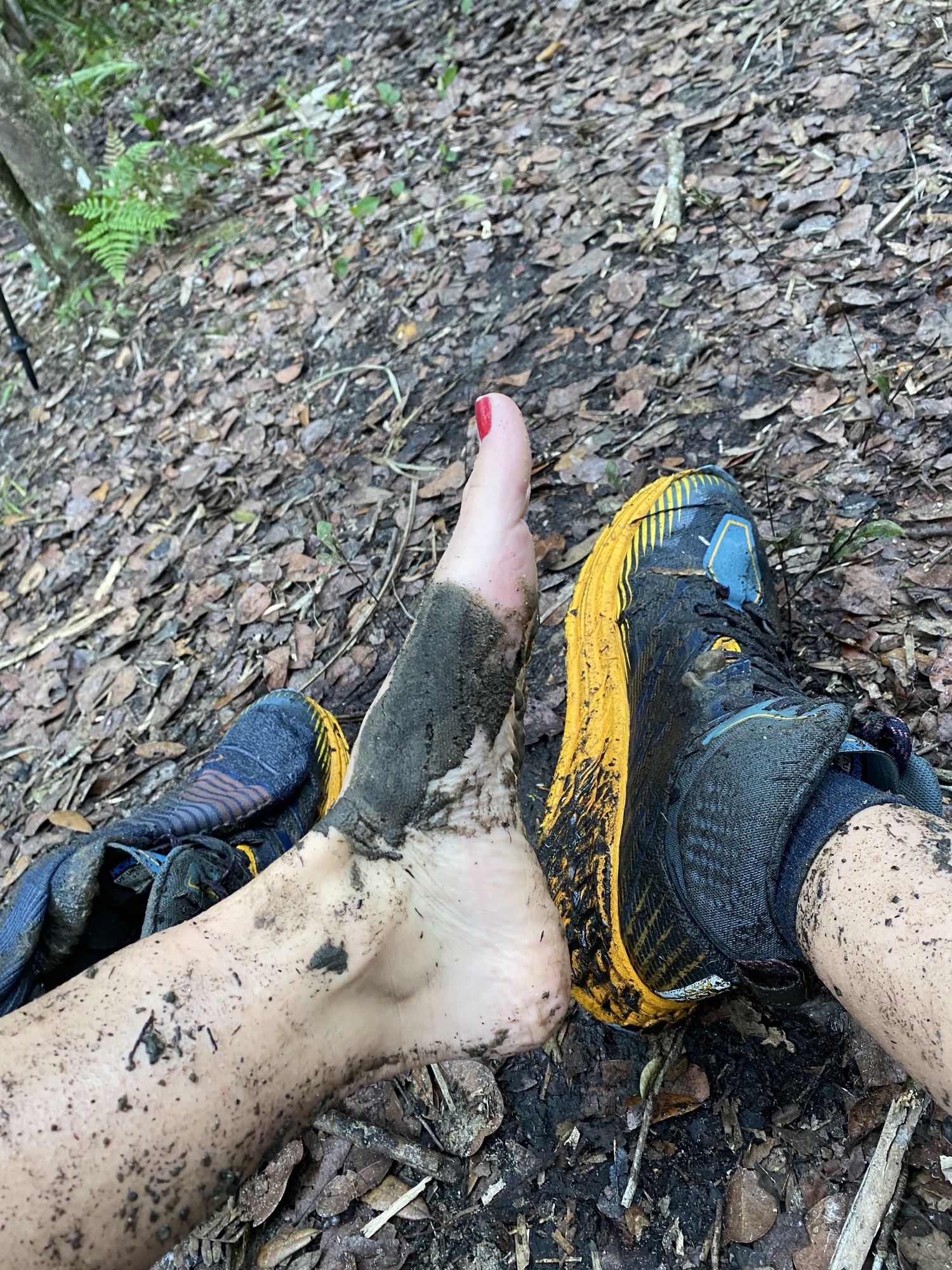 • Carrying a single hiking pole through the swamp, so one hand was always free to grab a hold of trees, etc.

• Stashing a fresh pair of shoes at the I-75 rest stop.

• Having a roomy weather- and bug-proof shelter. No cowboy camping here.

• Relying on water caches. The FT crew and volunteers take their job seriously and it’s great.

THINGS THAT DIDN’T WORK SO WELL:

• Trying to find a dispersed campsite outside of the designated dry spots/islands throughout Big Cypress.

• Using a 40* bag and not packing more warm clothes. I experienced several nights in the 20s!

• Using gaiters. Your feet are wet all of the time. They will fall off. There is no point.

Tina Haver Currin is writer, activist, and outdoors enthusiast currently based wherever the trails are. From 2016 - 2018, she lived in a Sprinter with her husband, two cats, and a dog, climbing as many mountains, running as many routes, and seeing as many National Parks as humanly possible. Whether climbing in the Rockies, bushwhacking through Arctic backcountry, hiking deep within the Grand Canyon — or thru hiking the Appalachian and Pacific Crest Trails— she discovered the variety of experiences one can have in our wild spaces and the joy of sharing what she has learned with others. Tina currently spends her time writing, hiking, eating, and planning her next trip.