YOUNG ICARUS FLEW OVER THE PYRENEES: SLEEPING FAR ABOVE THE CLOUDS

Words and Photos by Michel Grebenikof

Our favorite “correspondent from Dubai,” Michel Grebenikof, was kind enough to write up a trip report about a recent adventure he went on, this time in the Pyrenees. We first met Michel when he shared another trip he went on for the series, “The Situation is the Boss, Man!” that you can read HERE. He has a knack for getting into and coming out of burly escapades, as well as a knack for colorfully describing them. We’re always stoked when he says he’s got a new story for us because we know it’s going to be good! Read on. 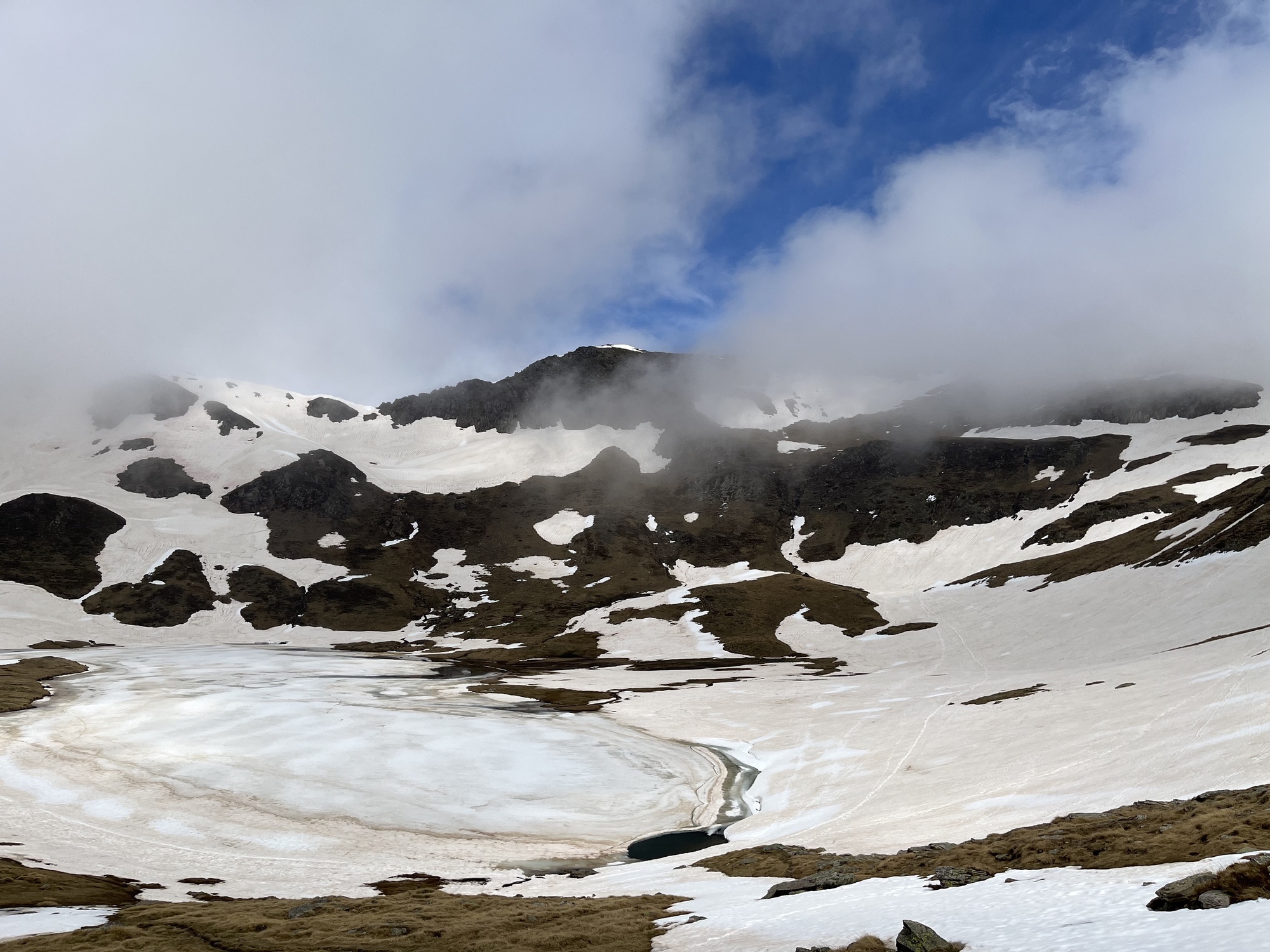 To be overwhelmed with the bliss of solitude, to be selfishly living and dying in sustained moments of pain, joy, exaltation, agony, and catharsis, I sought after a choice: take the High Route of the Pyrenees before it opens for summer. And in my existential brouhaha, I knew a couple of daily resurrections are needed here and there, just enough to touch the illusion of reality, to see it all together in one seemingly cohesive life.

I had never hiked in the Pyrenees before, and rather than carefully acclimate myself to its terrain I decided to skip a beat, up my game, keep it real, and wander the High Route at the end of April 2022. This is not an article about the best paths to take, nor is it about gear and clothing; it is definitely not about best practices. Instead, this is the story of a magical encounter.

The High Route of the Pyrenees, HRP for short, is a grandiose high mountain range that divides France from Spain, from the Atlantic Ocean all the way to the Mediterranean Sea. An 800km (497 miles) peak to peak trail averaging 2,200m (7,200 ft) in altitude and providing you, if you stick long enough on it to earn its trust, with some of the most spectacular sceneries in Europe. And while 80% of an expedition’s success is in its preparation, I had none. I had one week for the hike, and a six-hour flight from Dubai to Paris to plan, supported by a sixteen-dollar “on-air” paid internet subscription oscillating between not-much-of-an-internet-connection and crappy-internet-connection.

The trip started on the wrong foot when I ended up parked on the side of highway A65 going south. Gestating with my phone behind the emergency barrier, I tried to convince the gendarmerie (local police) on a Sunday evening to send me 10 liters of gasoline to dig my dried car tank out of its misery. I know what you are thinking of right now: “Really?”. Yeah, well, I just missed my opportunity to refuel while in an argument with Dead Can Dance over the radio. Shit happens. That being said, I am not a superstitious person; I enjoy control. 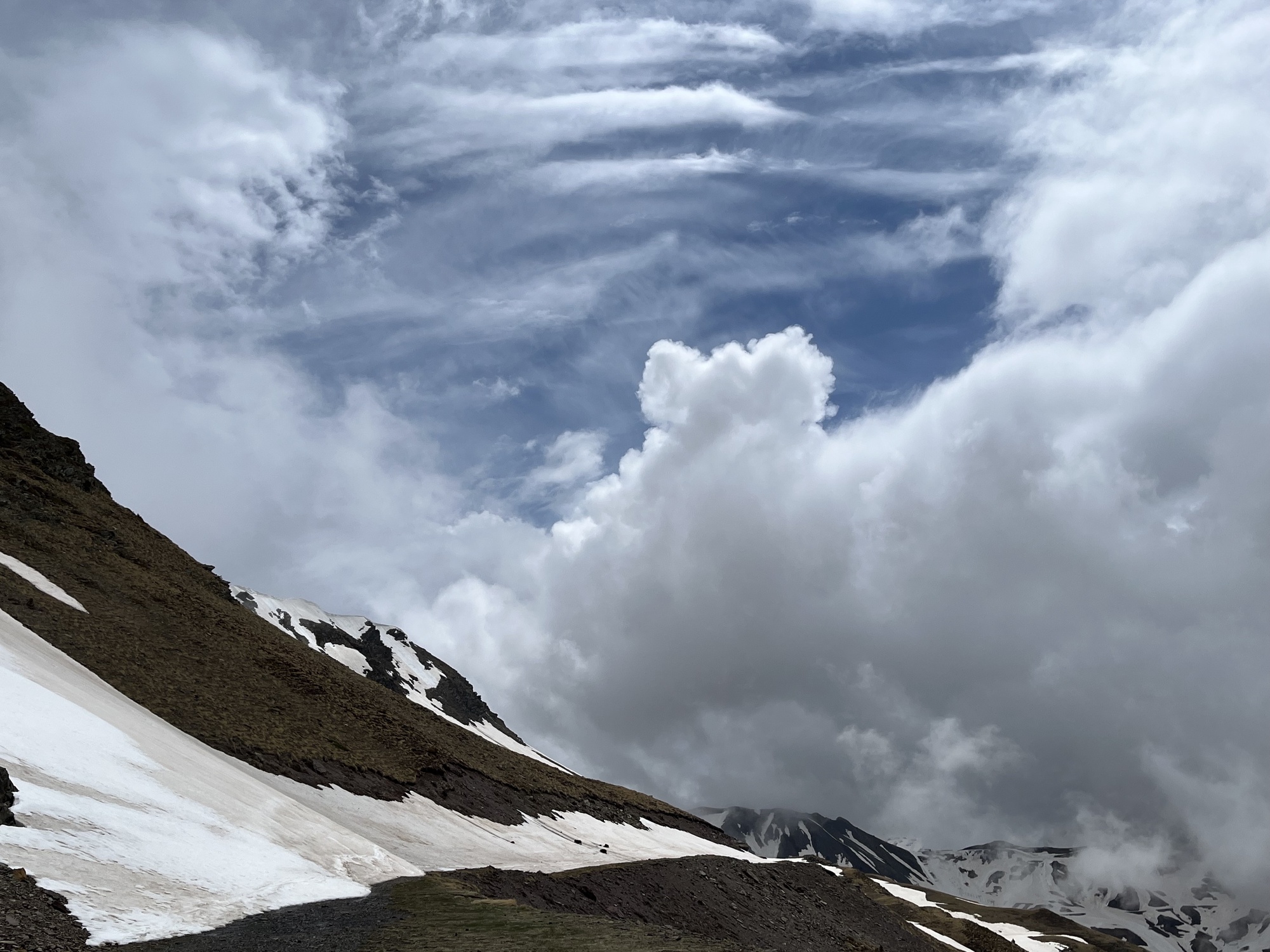 I got to base-parking in Lescun, a picturesque small village perched at high altitude with a couple of backdrop mountains whose heads are severed by the great white. I left my car under a severe rain-shell to start my hike towards the clouds. As soon as I stepped out of the car, I heard a deafening screech, a whistled yawp. Startled, I looked around for what turned out to be a colossal black eagle circulating not high above my head. I could have sworn it was staring at me, the only living soul around.

I foresaw a seven-day hike all the way to Gavernie, skipping the scattered refuges along the way and giving myself completely to the mood of the mountains. To let go meant dropping my arms and exposing my heart to the wilderness. Let me mention that the HRP is open for hiking only between June and August. I was there at the end of April for some reason. I wanted to touch the trail when it was least expecting it, to surreptitiously catch the mountains in its intimate state, even at the cost of being considered a voyeur-trekker gazing at a savage “déjeuner sur l’herbe .” Those of you who read my article about surviving a ninja snowstorm and the lessons learned during and just after would consider me reckless by now, but I am not. I merely find essential vitality in uncertainty. 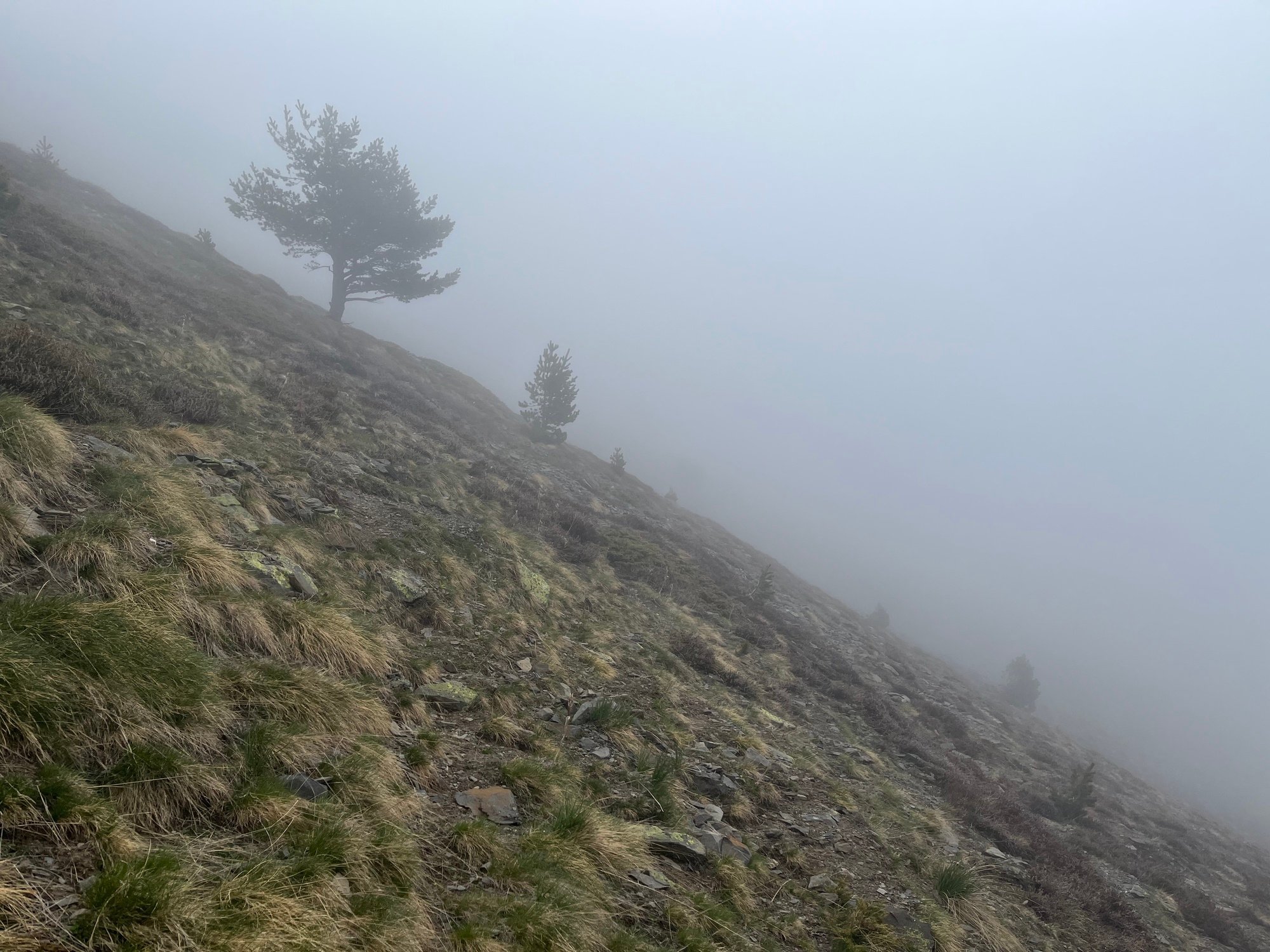 I climbed for three days in thick grey viscous weather. I couldn’t see anything but the foggy silver serpents roaming and hovering around me wherever I went, surrounding me five steps afar at all times. I could hear it lurking, scheming, and singing me to shipwreck. My poles had to take over the functions of my eyes and my feet, guiding me away from false paths and true ravines.

To protect its serenity, nature in the Pyrenees tends to run rivers underneath your feet, below the foothold layer of snow, waiting for the right moment of insolent trespassing to suck you into her belly. I did not feel her grace. She did not bequeath on me her generous bosom as if I barged too early into her dressing room. I couldn’t help but feel the presence of the black eagle I met at the parking spot journeying with me. I recognized him by the slight change of endnote in its pitch, not as much of a cackle or a gull as it is an urge, a beseeching. It appeared and vanished randomly a couple of times so far, rising abundantly, plummeting silently, calling on me from time to time, letting me know that all is okay, that he is here. At least, that is what I thought.

On the fourth day, I was looking forward to finding Ibon De Escarral, a high-altitude hidden lake in whose sturdy freezing lapis lazuli waters I promised myself to get rid of the sweat sediments. I was early to the wedding. Ibon was hard, still frozen, unwilling to open up to me. The sight of the wavy snow layer hiding beneath what should have been the lake felt like a drunk punch-up in the middle of my path–a piss on my unplanned parade.

Everything was frozen. The trail now seemed closer to a white winter legend; it did not exist. I felt the cruelest abandonment. I dropped my Southwest bag to the ground, yanked my Versa, threw my poles away, and broke down supine. I fell asleep. I slept the whole afternoon in the same position with arms and legs spread out, palms facing the veiled sky. I dreamt I was famous, not powerful, but rich somehow–not materialistic rich, but some kind of a public figure with radical thoughts, recognized everywhere yet afraid of his own self, running from one place to another without true purpose. It was terrifying. 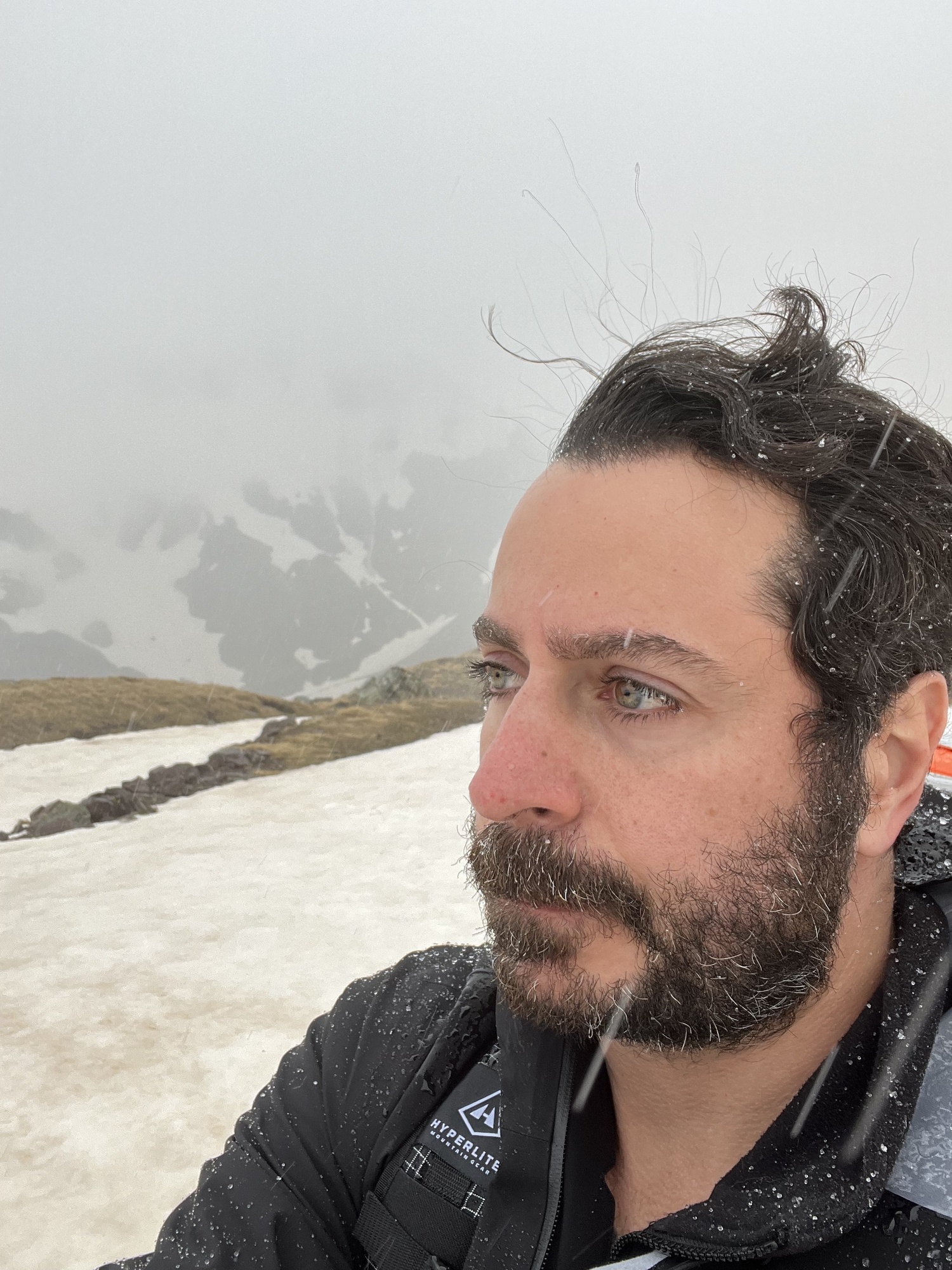 Lying on my back, my body reflected the natural stroboscope MC’ed by the intermittent salutations of the sun. The sky kept staring at me. I could hear my own breath, my heart punching itself in the face, I could hear the roaring flirt of the fog tyrant with the helpless skin of the mountains, and I heard the beating sound of the wings of my only friend in this eternity, the eagle pilgrim, Icarus. I had never heard the pounding thumps of a colossal eagle’s flight before; it got so near that I felt its brush caress my face–three to four times, gently waking me up from my helplessness. And I did wake up. I pulled every little motivation I could muster in my body to stand up on my feet and get ready to make the final push in knee-deep snow inside this theater of haze. One last breath before the first step, I looked up. I saw my sky companion going home, disappearing again, far into the clouds.

The following day was a long, hard, slow march around the slopes of Col d’Arrious at 2259m (7411 feet), locked inside the four grey moving walls of the HRP, it got darker, windier, angrier, and I felt I was going nowhere in this third terrace of Dante’s Purgatory. I pitched my tent then and there on a narrow plateau edging a ridge to the abyss. The four-horseman appeared in the shape of four lonesome trees scattered on the steep side of a distant mountain. It seemed a beautiful curtain-close on my five days struggle. But like the two sides of cheap motel curtains never meeting, the opening of a black insurgent appeared. Icarus hovered, shadowless, heaving with its golden eyes, circulating back and forth, never leaving me from sight. It screamed at me as if comforting me as I was being denied entry to the pearly gates, telling me: “It really is fine to knock on doors sometimes and hear not a whisper in response, especially all alone at the end of the world.”

On the next morning, I slipped through passages between the mountains to a nearby village. I then hitchhiked my way to Lescun in the back of an empty meat refrigerated van, driven by a guy my age who had a striking resemblance to a famous Spanish football player, the dancing-goal-celebrations type. He dropped me at a fork, and I had to walk under cats-and-dogs rain for a couple more hours to get to the car. My legs were sore, and my boots felt heavy on the tarmac–they hadn’t met a flat surface in six days. Water breached my ensemble, and I was feeling freezing cold trickles when I crouched. I looked for the car keys with a Buddhist serenity, opened the trunk, and dead-dropped my gear. Rain halted. A few steps to the side, I opened the driver’s door and slowly and painfully slipped one leg in with one leg outside. And I froze for a few minutes. I was scared but didn’t know why. Finally, I took a deep breath and pulled my head out again, facing the troubled sky. I gazed around for a bit. Icarus was gone.