MARK SIREK MAINEAdministrator Posts: 125
May 2022 edited December 2022 in OUR STORIES 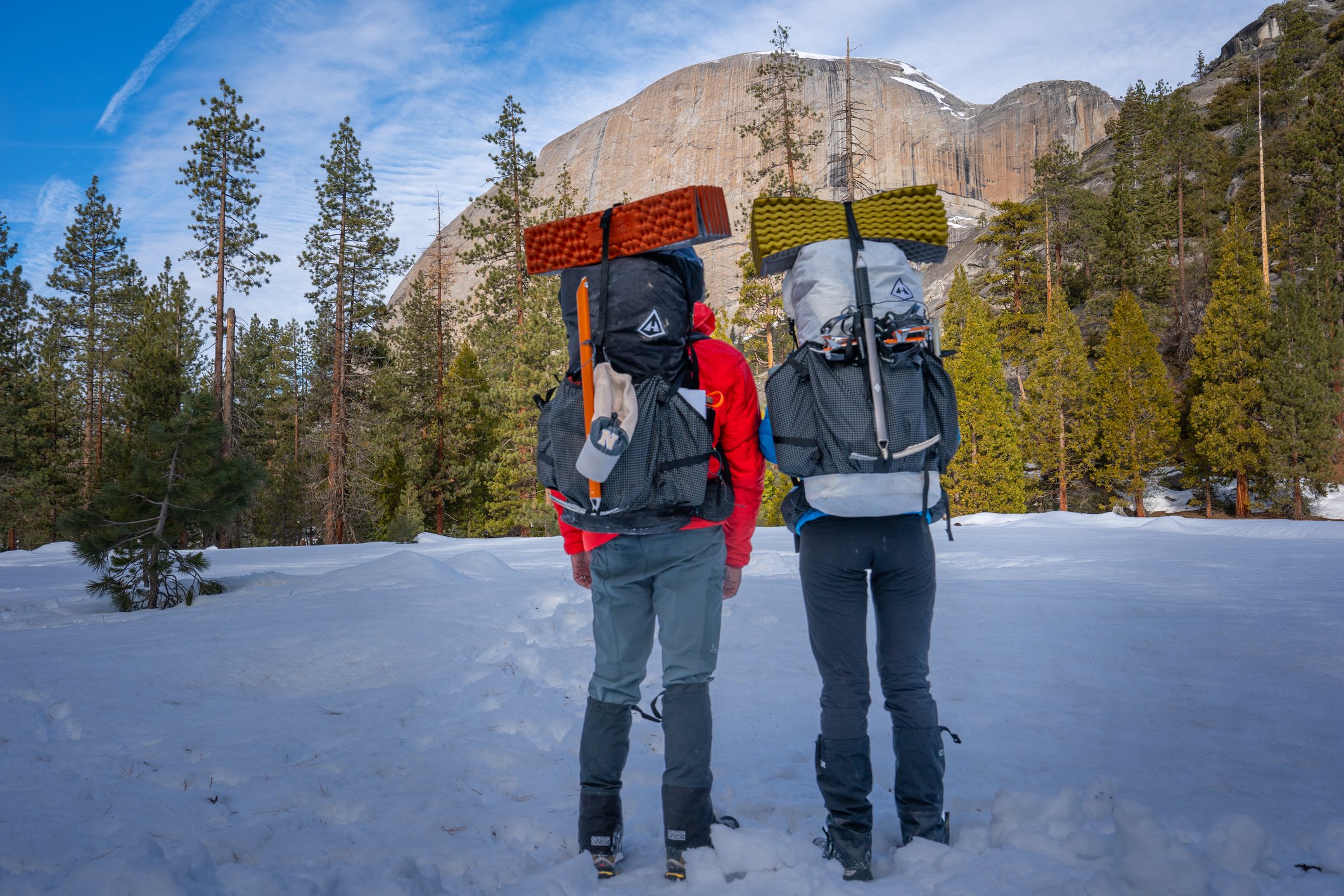 I am a born and raised San Diego girl. Growing up in a city that is sunny and 70 degrees year-round, I have no tolerance for cold weather. You say it's going to be 68 out today? I'll grab my puffy! However, last year my husband convinced me to go snowshoe backcountry camping for Valentine's Day, and I completely fell in love with the snow. The different ways the snow reflects light and the strange way it builds up depending on the wind all fascinate me. The sound of the crunchy snow under my hunky snowshoes was very satisfying, like popping packing bubbles! I was hooked and deemed snowshoeing a new Valentine's Day tradition. My husband very much approved. 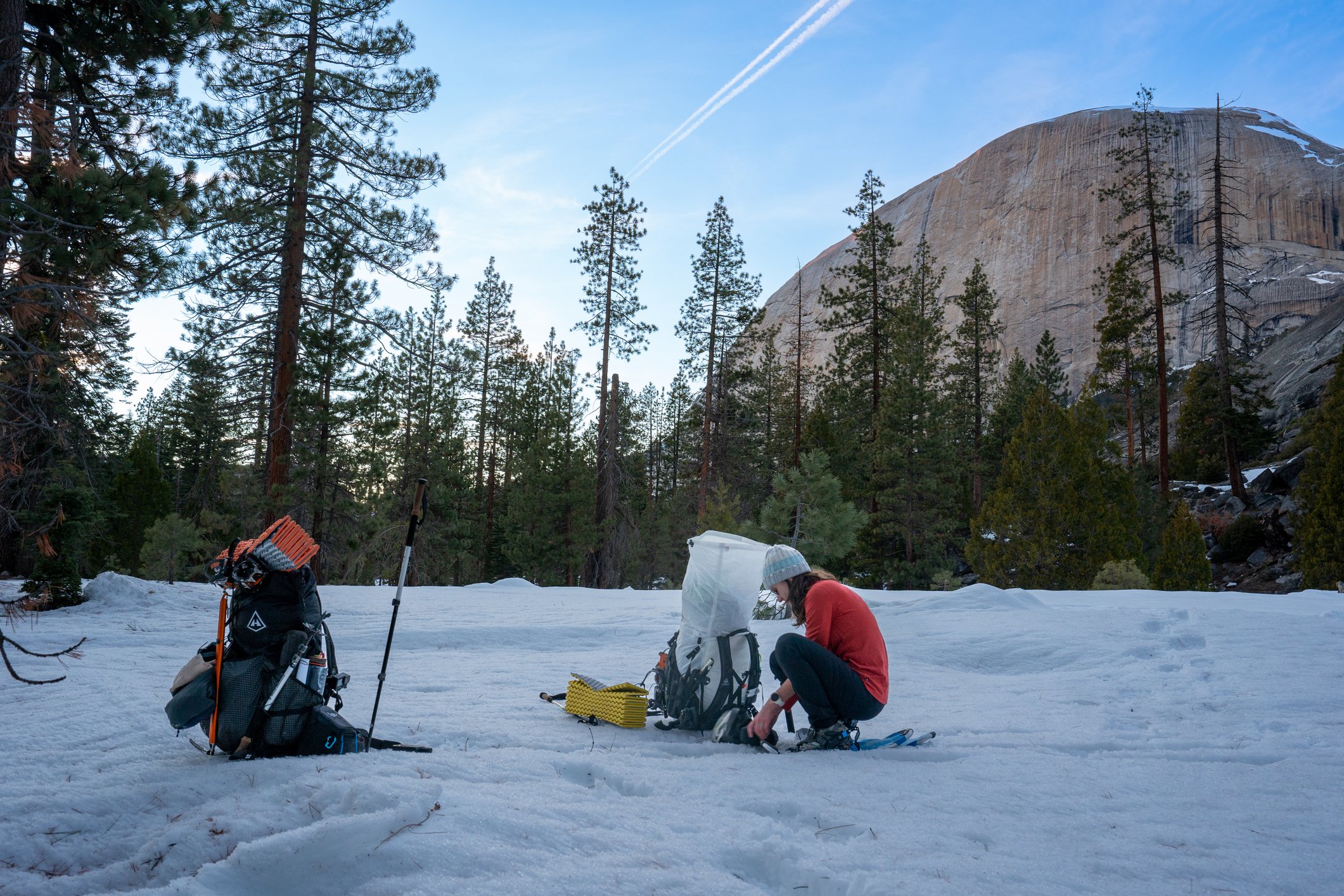 This year we planned to summit Yosemite's Clouds Rest, which is a peak just northeast of Half Dome. This would be a three-day, about 21-mile trek with close to 7K feet of elevation. Not the craziest trip. Not the easiest either. This trip would also require extra gear. The terrain could range from gravel to snow to ice throughout the entire trip. Snowshoes alone are not great for trekking over ice, so crampons were needed on the steep sections. When you have your crampons on, you gotta carry the heavy snowshoes. When walking on gravel, you gotta carry both crampons and snowshoes.

When I first packed my 4400 Southwest with all my winter gear, it looked like a lumpy mess! My previous backpack had four main compartments that both organized and restricted what gear went where; thus, the pack packed up well naturally. With just one big chamber, I quickly figured out that I needed to put a bit more thought into my packing. My second round of packing came out much better. As a matter of preserving my pride, a picture of my first attempt was not taken.

As we drove into the Yosemite Valley, the song "Landslide" by Fleetwood Mac came on the radio. This is not exactly the song you want to hear before summiting a snowy mountain. My husband and I exchanged suspicious glances. I skipped the song out of superstition. Ironically, the next song was "Avalanche" by James Author. I skipped it as well, and we laughed off the paranoia.

Since this is a Valentine's Day tradition, we did spoil ourselves a little and stayed in a hotel on our first and last days. The first night, we stayed at the Yosemite Valley Lodge. We enjoyed a hot meal and cold brews before going on our frosty adventure. 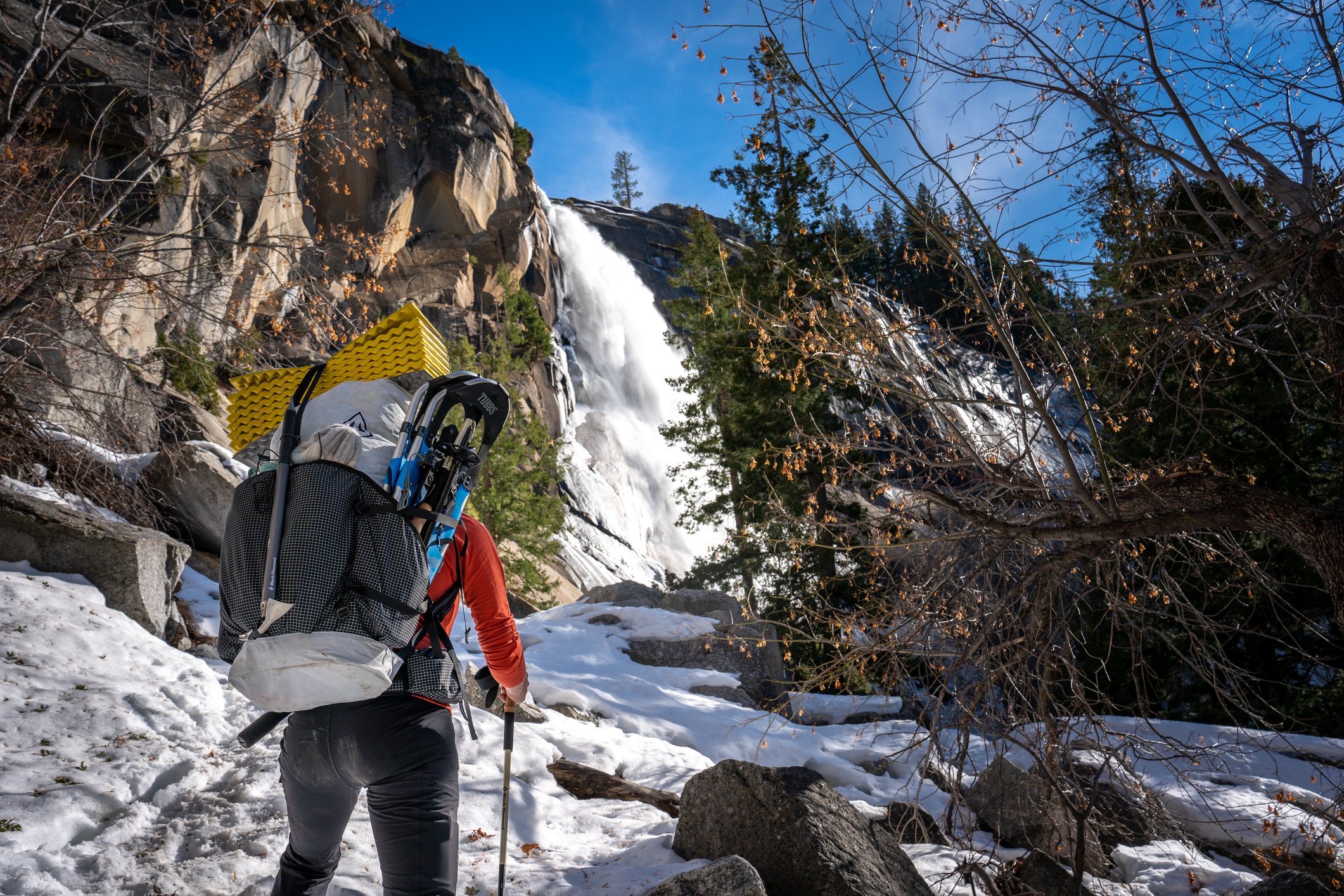 Geared up and ready to go, I was eager to breathe the fresh mountain air and a healthy dosage of nature in my soul. Even the first few steps on the trail were magical, and I knew the views would only get more extravagant.

The first mile was fairly flat as we followed the Merced River, but soon enough, we got to the first set of switchbacks, and the climb began. About halfway up the switchbacks, the path got icy, and we saw many day hikers turning around. An icy path meant it was crampon time. We strapped them on and breezed through the terrain. A few prepared day hikers continued on with microspikes. We passed many of them as they looked at our crampons with envy but our heavy packs with admiration.

At the top of Clark's Point, we were rewarded with a great view of Half Dome. We were also able to steal a peek of Nevada Falls. Although we put so much effort into climbing Clark's Point, we had to descend to cross the Silver Apron Bridge. Before crossing the bridge, we took a detour to the Vernal Falls lookout to take a quick rest and have a snack.

Crossing over Silver Apron Bridge was a sensory overload. I could feel the terrifying, unapologetic power of nature flowing just beneath me. The roar of the river, paired with the amazing views on either side, was quite overwhelming. 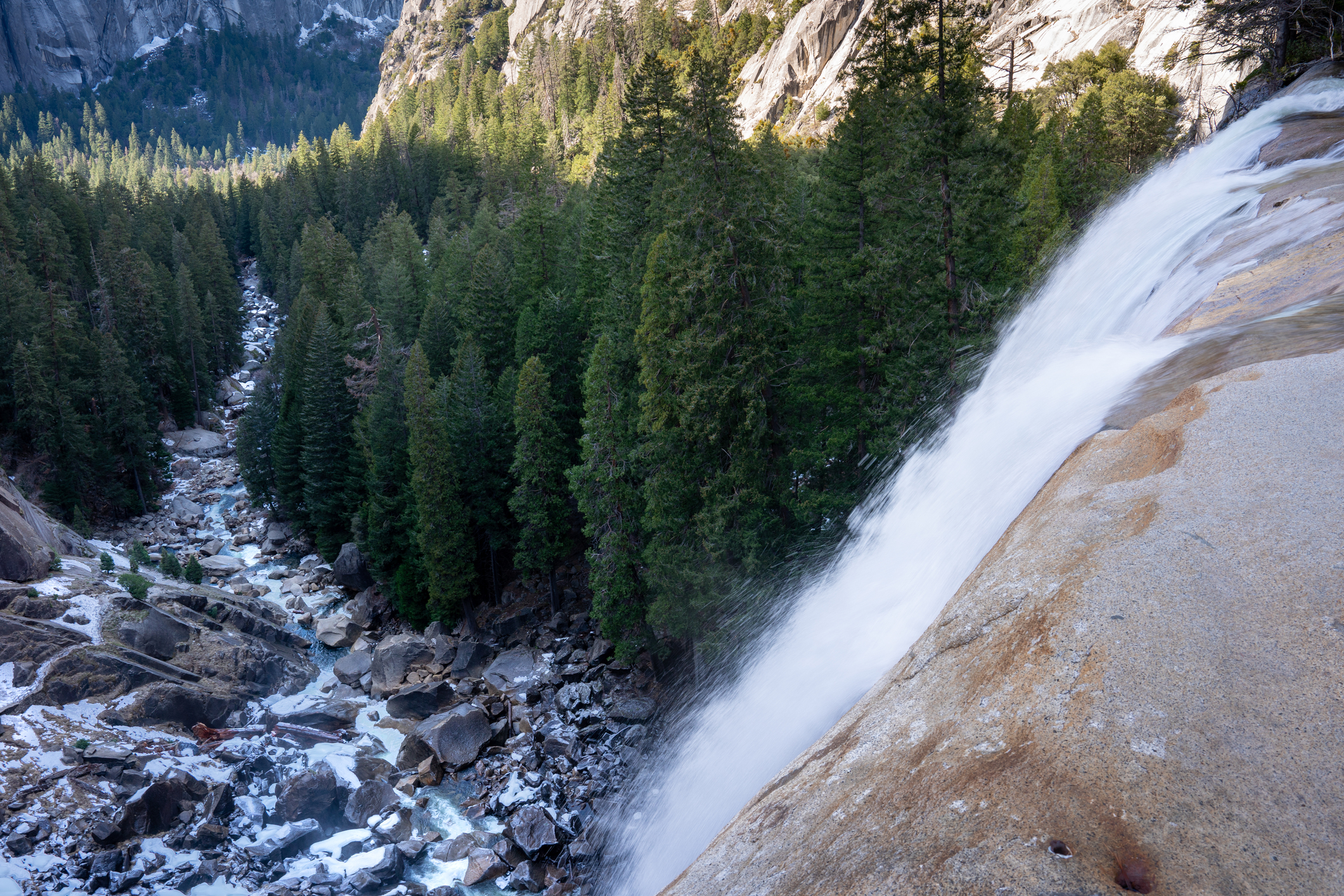 Another set of switchbacks appeared before us. During this leg of the journey, the terrain changed from ice to stone every 50 yards. In my head, I sang "cramp-on, cramp-off" as a parody of the infamous "clap on, clap off" commercials. Eventually, we just kept the crampons on and dealt with the horrible chalkboard scratching noise of the spikes over the stone. Finally, at the top of the switchbacks and what do we find? Snow! At last, we can justify lugging the heavy snowshoes all this way. We snowshoed along a peaceful river as the sun began to set. Just at sunset, we arrived at Little Yosemite Valley. Quickly, we set up camp and got some warm food in our bellies.

For the second day of our trip, we planned to leave our base camp, summit Clouds Rest, then return to camp for some well-earned rest. One of the great things about the Southwest is that it makes a great backpacking pack but also a great day pack. I loaded up the minimal gear I needed for the day, and we made our way to the summit.

I am a bit disappointed that there was not much snow for snowshoeing on Day Two. Although we took the snowshoes, we only used the crampons. It took much longer to get to the summit than we thought. We first set a turnaround time to a conservative three pm. As three came and went, we then set the turnaround time to four. 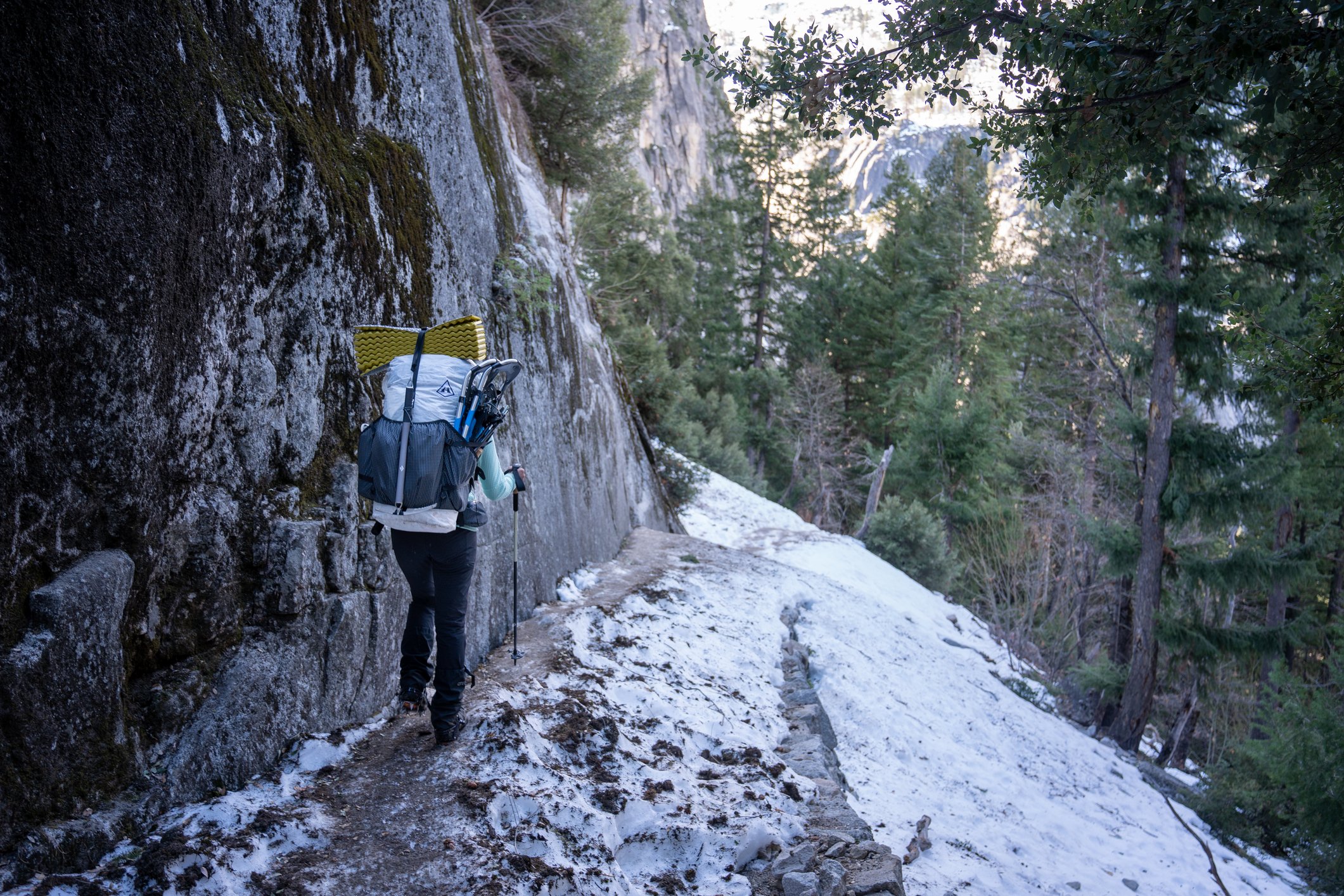 The last mile has some pretty significant elevation gain and undisturbed snow. At first, my husband took the lead to blaze a new path through the snow. After a bit, he was exhausted and wavered on turning back. We decided I would take the lead and he felt renewed without the extra effort of stomping down the snow. This part of the trail made me a bit nervous, and I recalled the strange "Landslide" and "Avalanche" musical omen from the beginning of the trip. In reality, the avalanche warning was low, but my superstition was high!

Around five pm, we watched the sun sit low from the summit. It was way past our turnaround time, but we were prepared. We knew we could make it down the switchbacks before dark, and we had a well-marked trail, our headlamps, maps, and GPS for the rest of the way down.

At the peak, I was in awe of the magnificent scenery. Of course, the fact that I stood before the majestic snowy landscape did not make it any warmer. So how did this San Diego Girl get over her intolerance of cold weather? The answer: layers, layers, layers, and wiggle, wiggle, wiggle! Over the last year or so, I have collected the perfect arsenal of layers. Also, wiggling your fingers and toes is the key to withstanding cold weather.

We indeed made it down the switchbacks before dark; however, most of the hike back to camp was pitch black. On the way, the milky way streaked across the sky above us. Hiking at night added a new beautiful perspective to the forest. 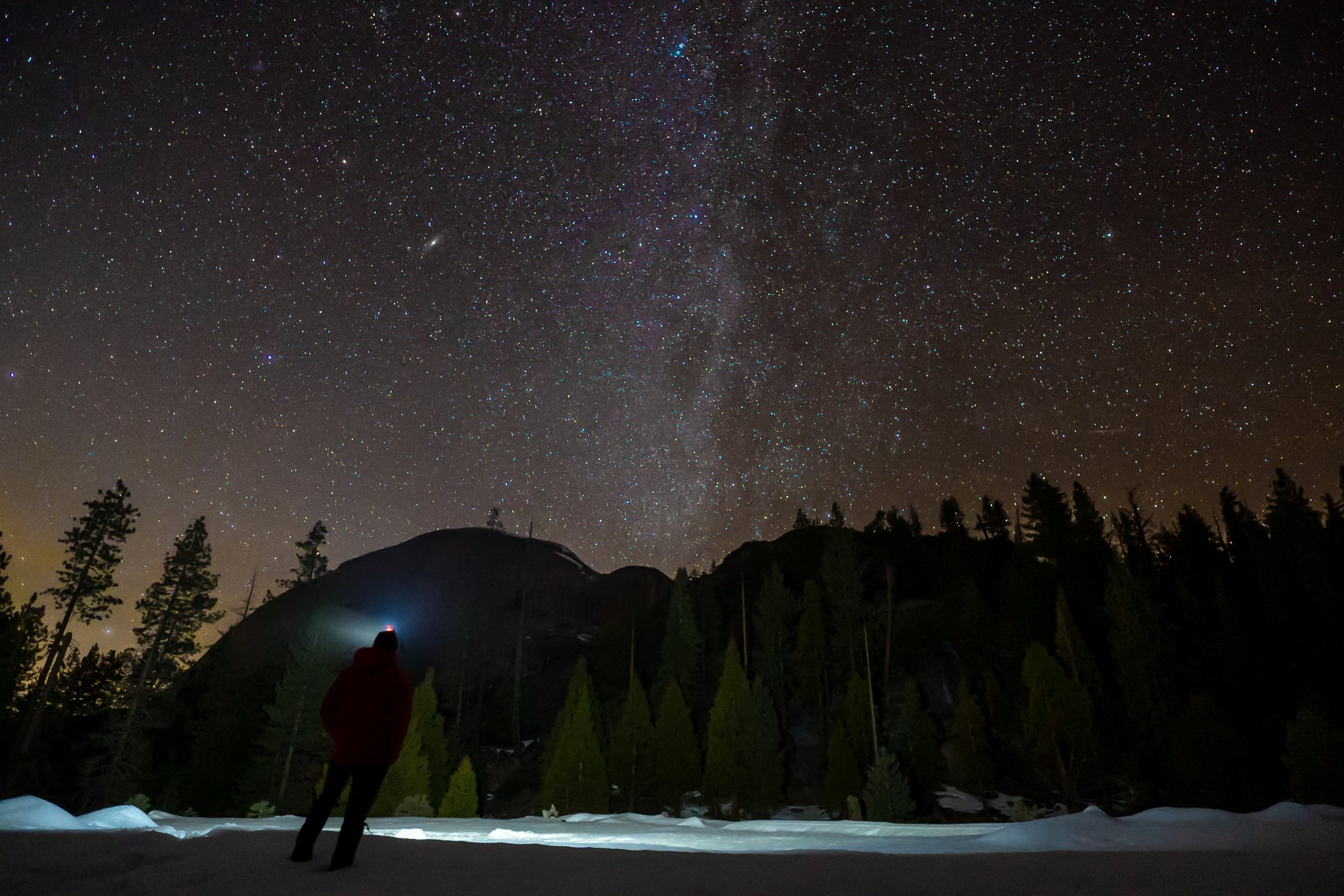 On Day Three, I converted my Southwest from a day pack back to a huge backpack loaded up with all my gear. We waved goodbye to our campsite and our amazing view of Half Dome. We headed down the mountain, sad to leave the snowy terrain but excited for a delicious Valentine's Day feast! 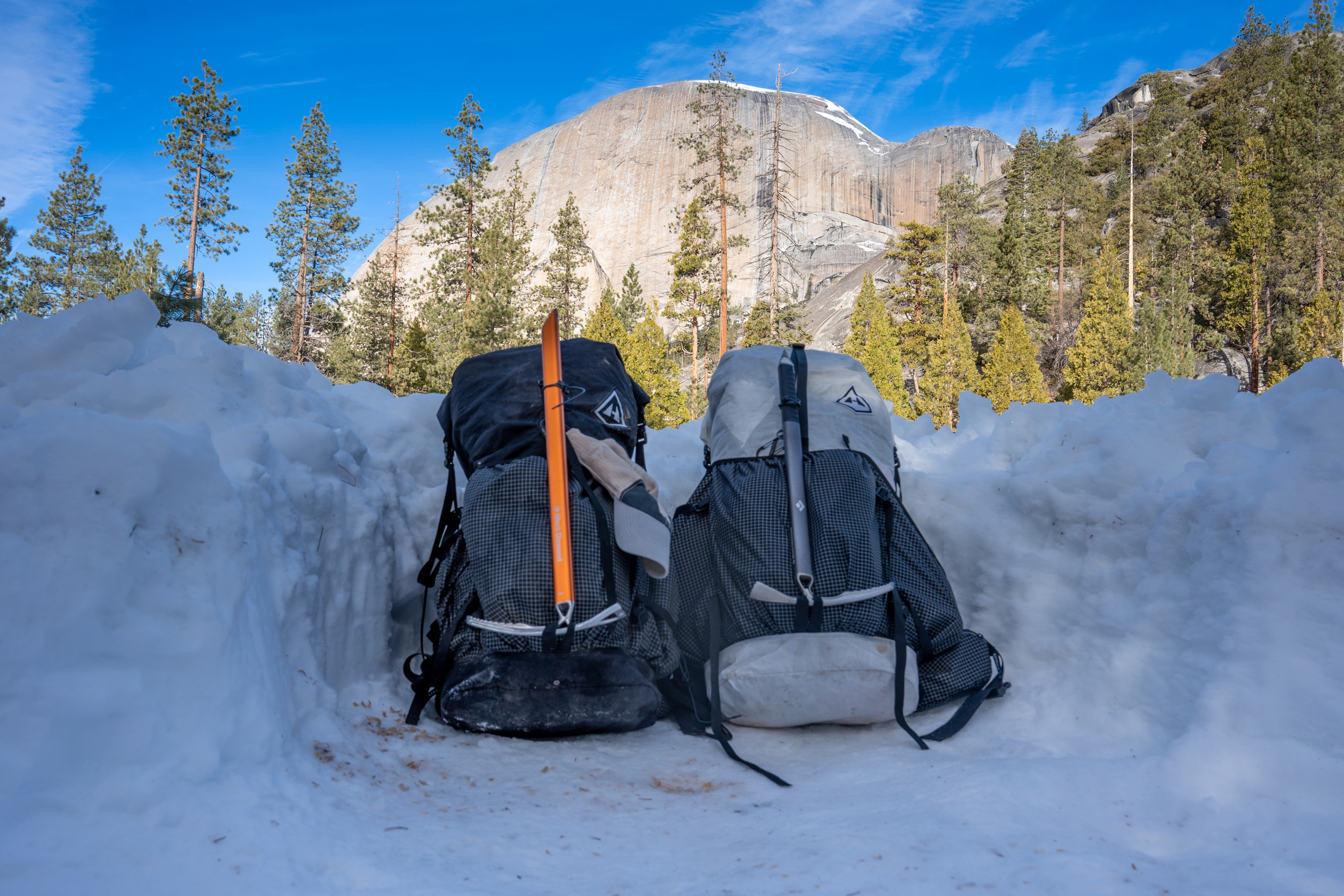