Arkansas might not be the first place to come to mind for some premium and challenging thru hiking, but the Ozark Highlands Trail has been coming up more frequently in conversation lately as a great and rewarding route, and an alternative to some of the more highly travelled destinations. Jeff Garmire checked it out this year, and offers this trip account. Jump in with any questions! 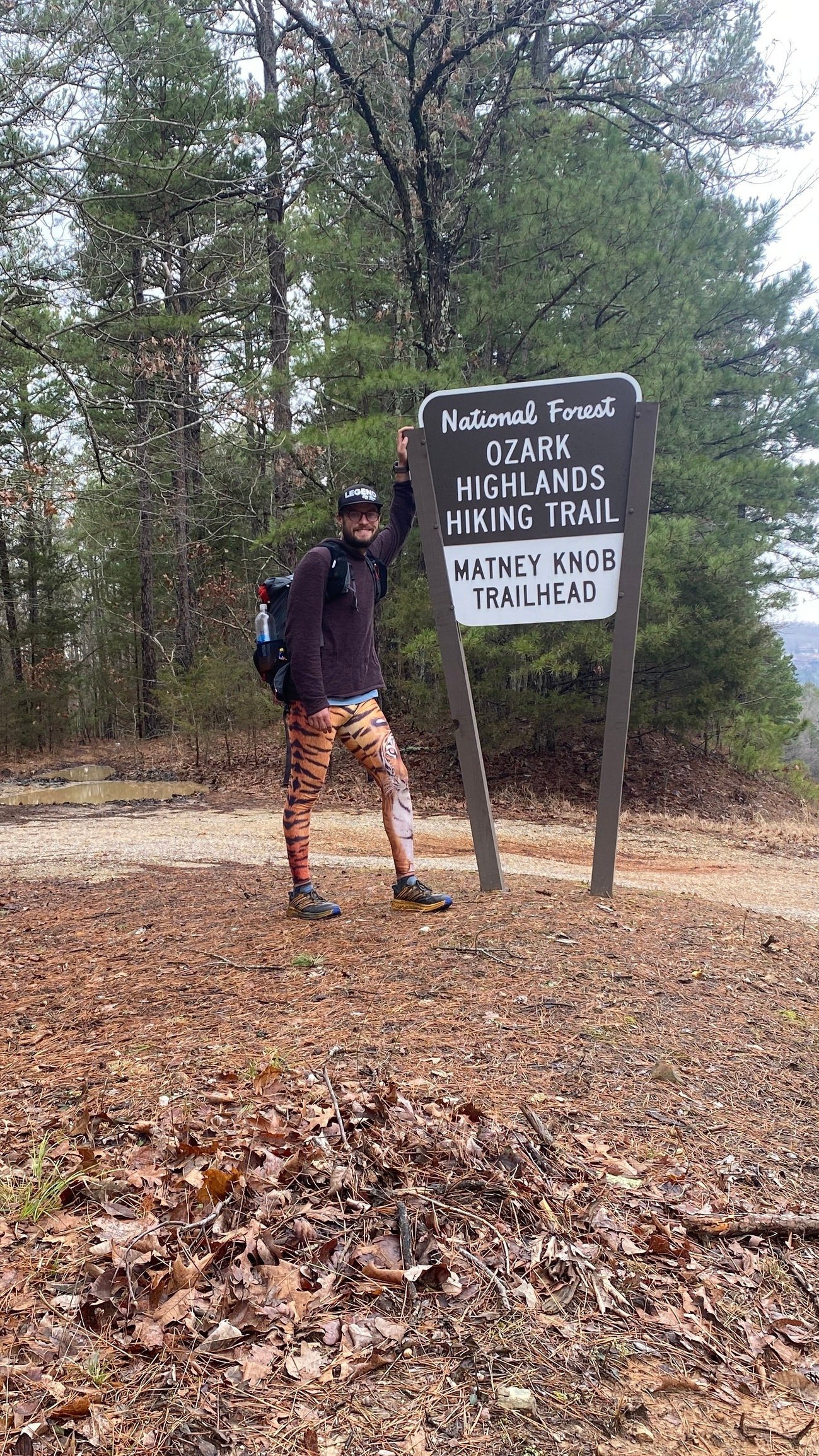 Every year I look for a new region to visit. A natural landscape that I have not experienced and can explore with only a backpack. This year I wanted to explore the Ozarks.

During a thru hike of the Ouachita Trail, further to the south, many backpackers suggested the Ozark Highlands Trail, and this year everything fell into place. The length, location, and terrain seemed perfect. And the ideal hiking time would make it a good winter break from Montana. So, I booked my ticket and flew to Arkansas.

The weather looked iffy, but doesn't every trail in the winter? My initial goal was to thru hike the trail in its entirety in one direction and then attempt to set the FKT on the way back. It was a fluid plan that depended on the conditions and how my body responded to a few high mileage days. The thru was part exploratory, part training, and part challenge. I just didn't know how much of each would be involved.

I hiked with my good friend and Outside Magazine Outsider of the Year, Lil Buddha for the first three days. The weather was perfect; it was cool and crisp in the morning and warmed up to T-shirt weather by the afternoon. I had a great time hiking with a friend, but after 85 miles, Lil Buddha had to return to Kansas City, and I trekked on alone. 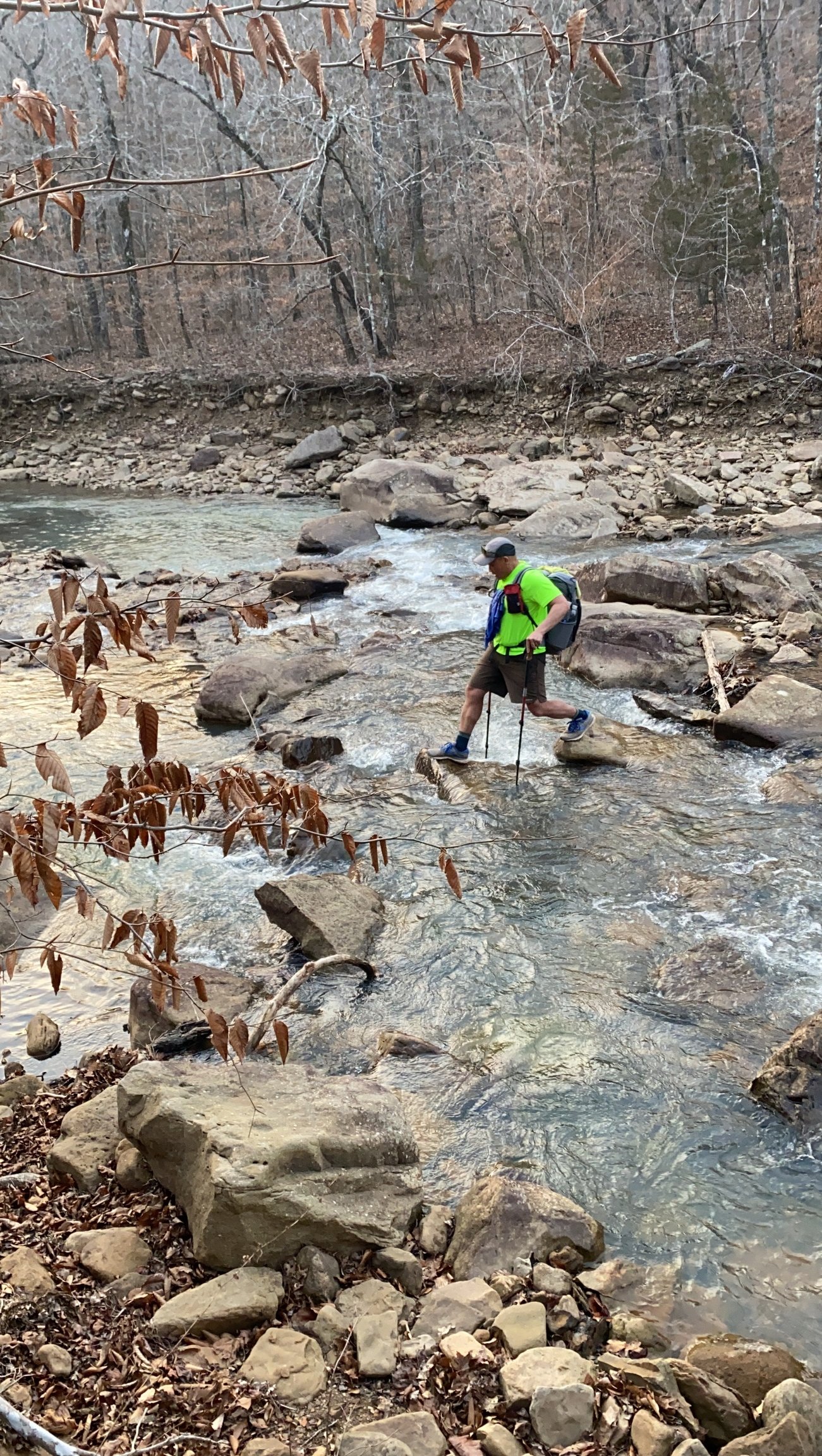 I consider myself to have a healthy respect for nature, but I did not expect Arkansas to throw such inclement weather at me. After my friend left, it started to rain, and the intensity only increased. The rivers and streams swelled to flood stage.

I reached Hurricane Creek, and it was raging. The comments on my GPS app noted that some thru hikers had turned around at its sight. But I was trekking on. The first crossing was roaring, a rock hop, and then a terrifying tiptoe through a foot of rapid-moving chocolatey water.

I was so relieved to get to the other side that I neglected to look ahead. If I had, I would have realized I had to cross the same creek again. 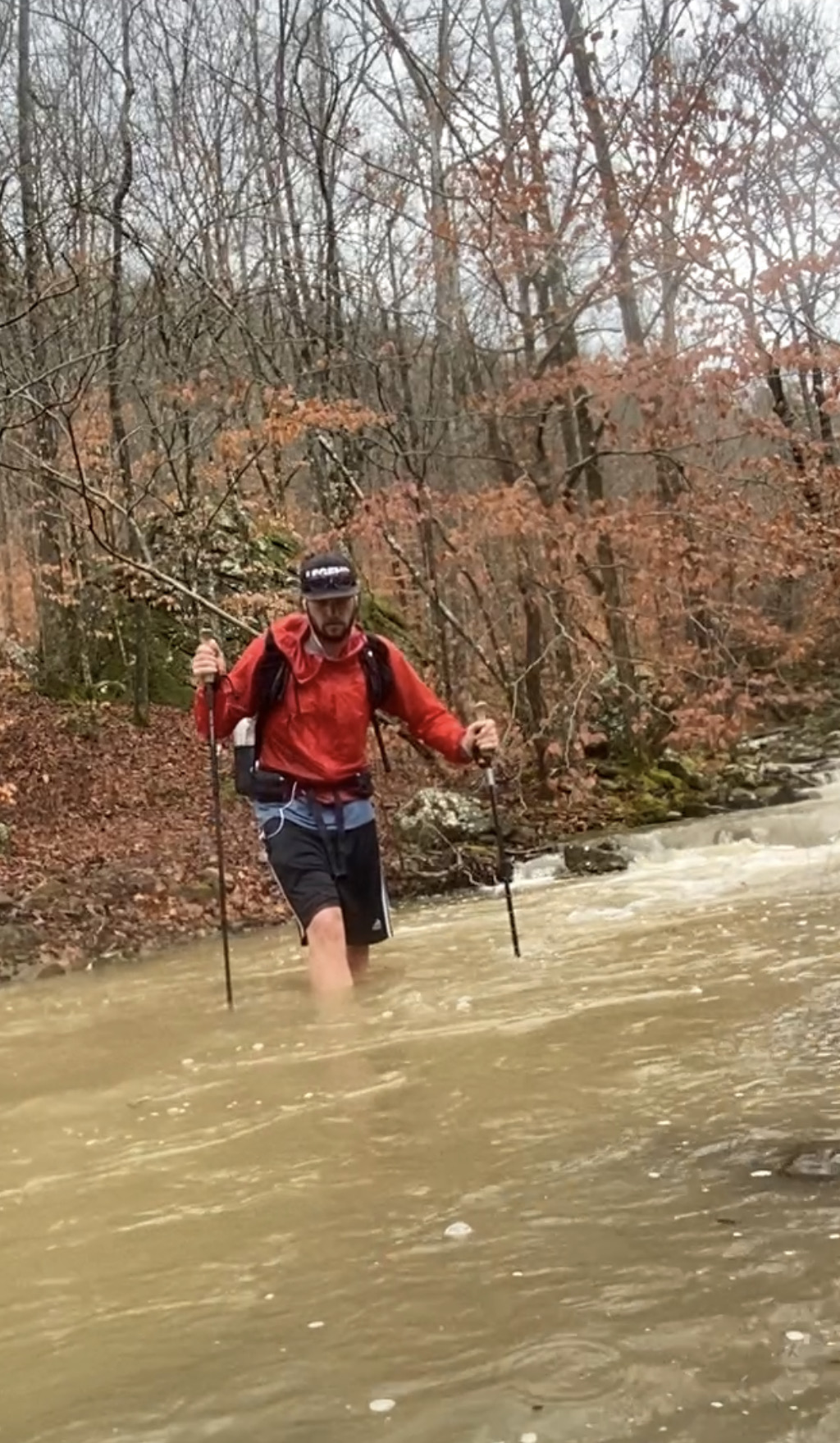 At the next crossing, my heart sank. There was no way that I would be able to cross where the trail crossing was. The creek roared like a river and was a muddy brown. The waves and the current were choppy, and the water was deep. It would sweep me down the minute I got halfway. So, I scrambled along the bank downstream in search of a safer place to cross. I bushwhacked through the ups and downs of the river and thoroughly scratched up my legs in the process. Finally, I found a tamer spot. The water was deeper, but it moved slower.

I repacked all my items into waterproof bags and slowly dropped into the water. My feet kicked out for the bottom as I lowered myself off a tree limb. They finally found the riverbed when I was chest-deep, and I immediately knew I would have to swim across. One foot from the shoreline, and I was already five feet deep. I had done this before and took a few minutes to center myself before a cold swim. 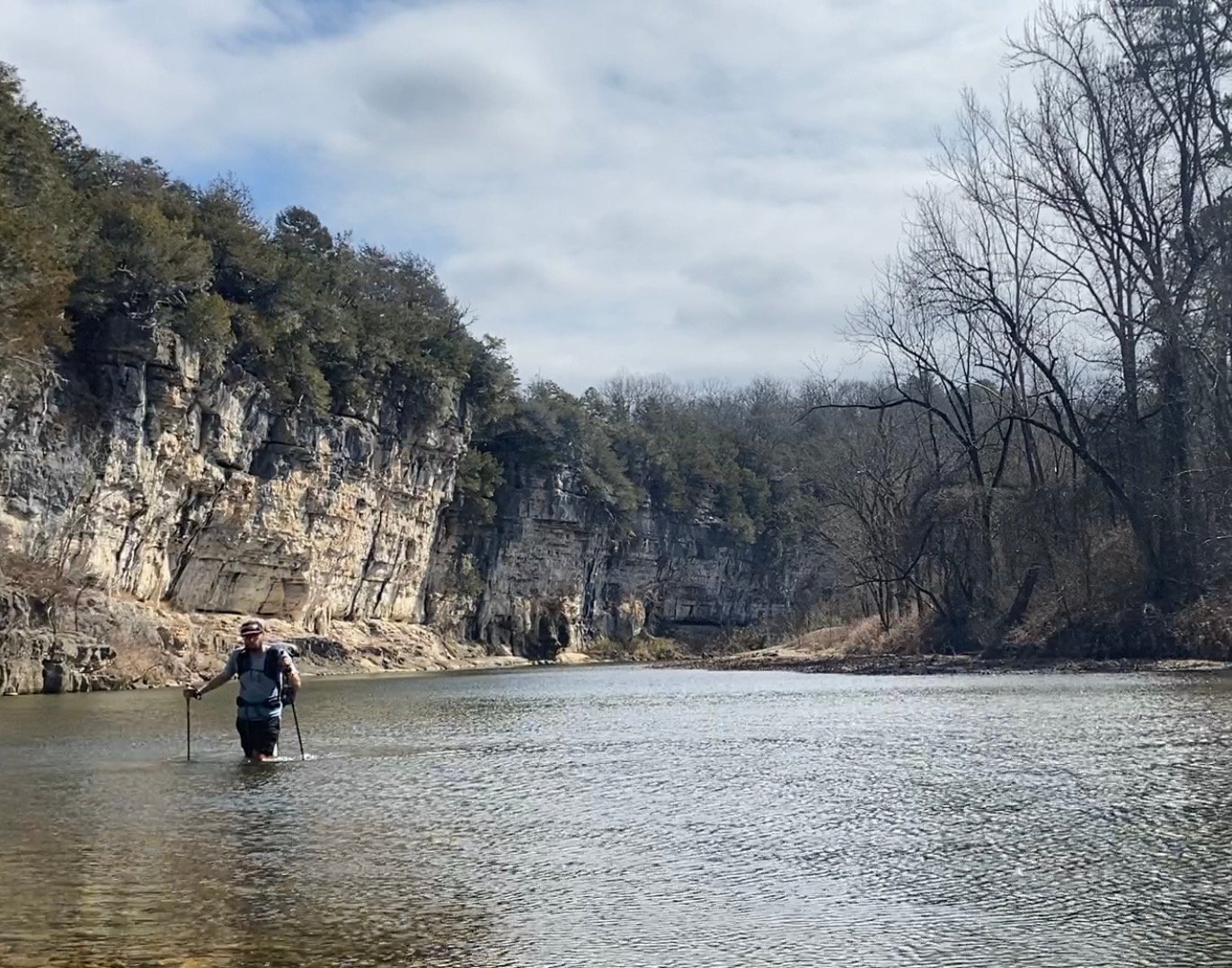 I pushed off, and the cold took my breath away. The air in my pack acted like a giant buoy in the current. I ferociously frog kicked while steering with my arms. Five painful minutes felt like an eternity, but I made it to the other side. My body shivered uncontrollably as I emerged from the cold water. Frantically I ripped open my pack and put on all my dry clothing. It felt like I would shiver to death if I didn't start moving.

I quickly ascended straight up the hill and away from Hurricane Creek. But then it began to snow. The flakes fell softly at first but soon grew thick. The ground was completely covered. I never had a chance to warm up. It was not a good situation. I was underdressed and unprepared to be wet and cold. The temperatures would continue to drop through the night. A cold front was moving in.

I got to a highway and stuck up my thumb for a ride into Russellville. It would be my first deviation from the plan. But adventures are all about flexibility. Taking off a half-day in the evening and then a half-day in the morning to get back to the trail would impact my schedule. But weather and conditions dictate an adventure.

I was content with the hotel, and getting back the following day proved easier than expected. After the river crossing and lousy weather, I needed the break and the reset.

Going forward, the weather only got more sporadic and worse. It would rain one night only to clear up the next day for a few hours. The scenery was green and fantastic, with powerfully cascading waterfalls, but the conditions were something I simply couldn't figure out. They slowed me down, everything was wet, and it began to impact my window to go for the FKT.

Along with timing, navigating and crossing these swollen creeks at night during an FKT push became a concern. I wouldn't be able to navigate the mud, water, and route efficiently if these conditions persisted. 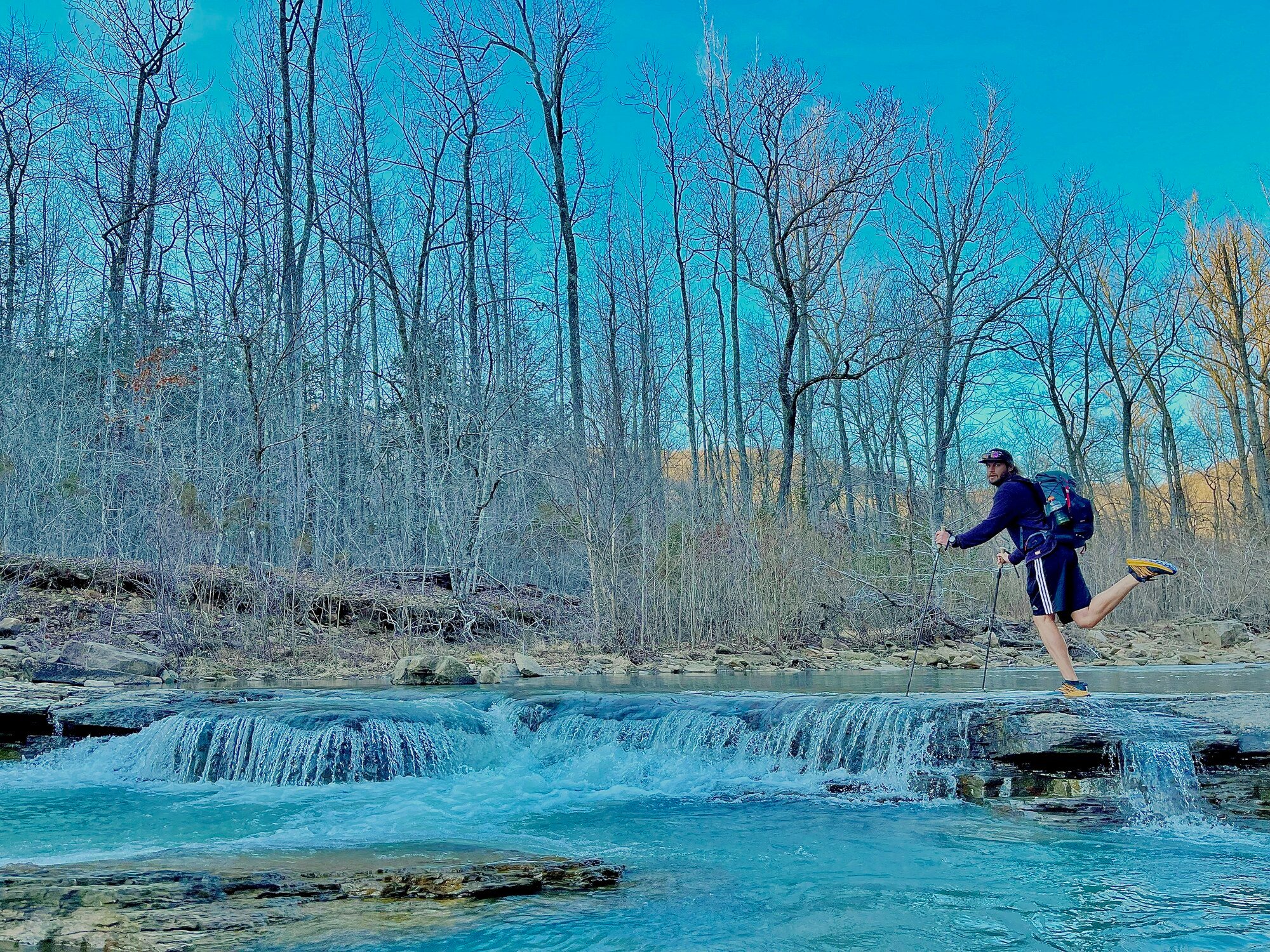 The further I went, the more remote the possibility of attempting any record became. I reached Highway 7 and changed the goal altogether. I had a new drive to complete the entire route despite unfinished segments.

At mile 205, it got complicated. The footpath disappeared. I couldn't find any sign of the trail despite the route saved on my phone. It didn't exist. I was stuck. But I knew it followed the river, and that was easy enough to work my way along. There was no trail, and I slipped and slid in the slick mud. Finally, I came to a more defined track, but it was very faint and difficult to discern. A few more slow miles, and I went off on my own, neglecting the GPS track.

An old gravel road led down towards an intersection and a trailhead that connected with my supposed route. By the afternoon, I was back on track. The trail reappeared, and only twenty miles of the trail remained. The eastern Sylamore Section was a treat with views and plentiful water. But, once again, a massive storm was moving in. I camped 15 miles from Matney Knob trailhead, hoping for a nice final day.

Thunder woke me at midnight and crashed right overhead. The downpour was torrential, and the floor of my tent floated on a puddle. Shivering, tired, and miserable, I packed up in the flashing lighting at 4 a.m. and began hiking. I finished the entire trail by late morning, just before the snow started to fall. Overnight half a foot had accumulated.

It was not the adventure I had envisioned, but it was exciting, stimulating, and another good lesson taught by nature. The route was spectacular and offered the chance for a more traditional thru hike than simply an FKT. The Ozark Highlands Trail was an awesome experience!