THE SITUATION IS THE BOSS, MAN: HUMBLY HYPOTHERMIC ON THE COLORADO TRAIL

In this post, Thru Hiker Josh Sheets shares a story about a run in with a nasty storm that led to a hypothermic situation that could have been so much worse had it not been for a serendipitous encounter with another hiker. It taught him a lot which he in turn is kind enough to share here. Have you ever had to deal with hypothermia? Jump into the discussion after the post, tell your tale, and let loose on any advice you have!

The Colorado Trail (CT) is often billed as “mile for mile, the most beautiful trail in America.” In 2018, I experienced each one of the beautiful 486 miles from Denver southbound to Durango. I even took the higher and more scenic Collegiate West route.

During my pre-trip research, I repeatedly encountered cautionary tales about the afternoon summertime thunderstorms; they are like clockwork and should be taken seriously. It is stressed that you should be over all of your day’s passes by early afternoon or be prepared to wait out a storm at a lower elevation until proceeding up and over. Being off the main ridgeline reduces your exposure and chance of a lightning strike. I did my pre-trip due diligence and didn’t skip over these nuggets of information. After all, everyone knows you can get struck by lightning. However, I would learn the hard way that the risk of a lightning strike is just one of the things that could kill you.

The CT was the first time I was exposed to backpacking above treeline for an extended period. Not even on the AT in New Hampshire and Maine did hiking above treeline amount to the exposure the CT provides. Hiking in such vast spaces makes for some great weather observations, and I would routinely see thunderstorms way off on the horizon. The mornings would be cool and sunny each day, but ominous cumulonimbus clouds would start to build by late morning.

Heavy thunderstorms were practically a daily occurrence between 12’noon and about 4:00 pm. Usually, hailstones between the sizes of a pea to nickel would accompany the storms. This was all new to me and somewhat exhilarating because, after all, I cherish being in the mountains and experiencing them, weather and all. 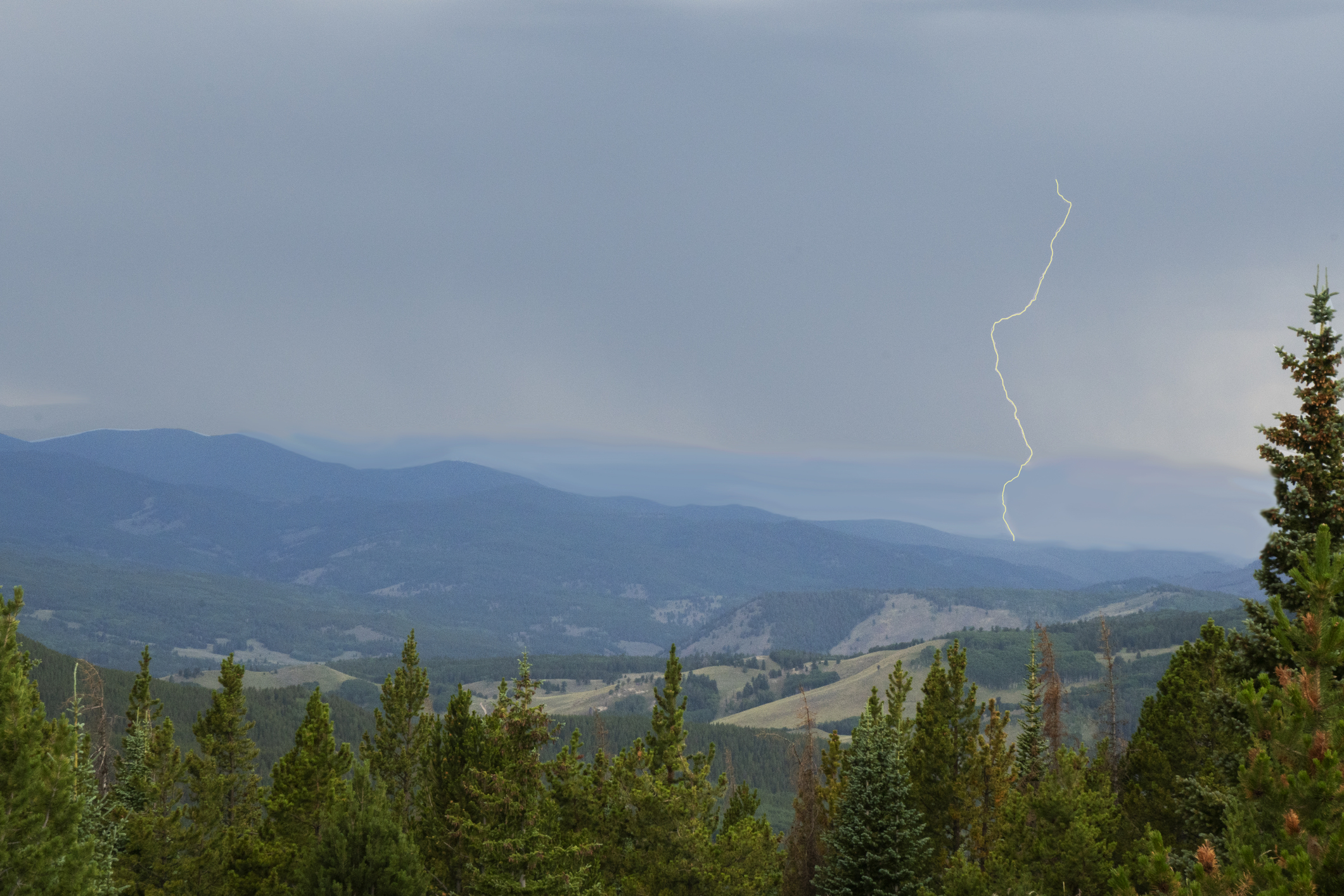 The weather was often awe-inducing but a little unnerving!

I had completed more than half of my thru hike when my enthusiasm got a serious checking. I was ecstatic that I had just crested the highest point on the CT (13,271 feet) and kept pushing onward despite very ominous skies. I was firmly above treeline, and in this area of the trail, there were no flat (aka “good”) places to camp. Instead, the trail was etched into the side of the mountain and was slowly winding its way up to the pass below Carson Peak.

Thunder was rumbling, occasional hailstones would fall, it was getting very dark, and the wind was kicking up the sweet-smelling dust from the trail—a doozy of a storm was rolling in. My line of sight to the pass made it seem not that far away. With no trees or shrubbery to offer some shelter and me despising going back the way I just came, I decided I was committed to going over the pass. My quickened pace made short work of the ascent, but it placed me on the crest of the pass just as all hell broke loose.

The force in which the storm spilled over the high-elevation pass was unlike anything I had ever physically experienced. The strength of the wind literally blew me backward. The rain and hail were coming sideways; the hailstones stung so badly on my exposed legs that it felt as if I was being shot with a paintball gun. I would later realize the hailstones produced welt marks on my legs.

The wind ripped off my pack cover and quickly escorted it to some far-flung destination. The cold air, made even more frigid by the high wind, took my breath away, and the torrential rain was penetrating my layers. In the time it took you to read those last few sentences, I was now freezing cold and trying to hustle down the other side of the pass.

I saw a lone hiker trying to wait out the storm during my descent. He was squatting under a poncho on the edge of some shrubbery. I yelled to him and quickly diverted my walking towards him. For the purpose of this narrative, we shall call him Saint. I was eager to have company because I am being honest when I say that this was the first time I was truly terrified for my safety while backpacking a trail. I was soaked through, freezing cold, and now shivering uncontrollably.

Saint and I determined that I had the bigger tent, and, together, we tried to set it up so we could have a bit of shelter and I could get in my sleeping bag to warm up. But, in setting it up, the poles snapped under the strength of the wind. The situation was turning very dire, and he confirmed my suspicion that I was in the early stages of hypothermia. I would soon find out that Saint was skilled in backcountry search and rescue and was an EMT from Hamilton, Montana. What luck do I have?!

From a safety standpoint, he decided that pitching his tent was the only remaining viable option. Unfortunately, due to numb hands, I was barely able to help him set up his tent (a one-person Big Agnes), and once up, we both huddled in it, foot-to-face. We would stay there until morning, him checking on me occasionally to make sure my hypothermic condition was not worsening. The following morning, I emerged from that tent more humbled, thankful, and possessing even greater respect for Mother Nature. 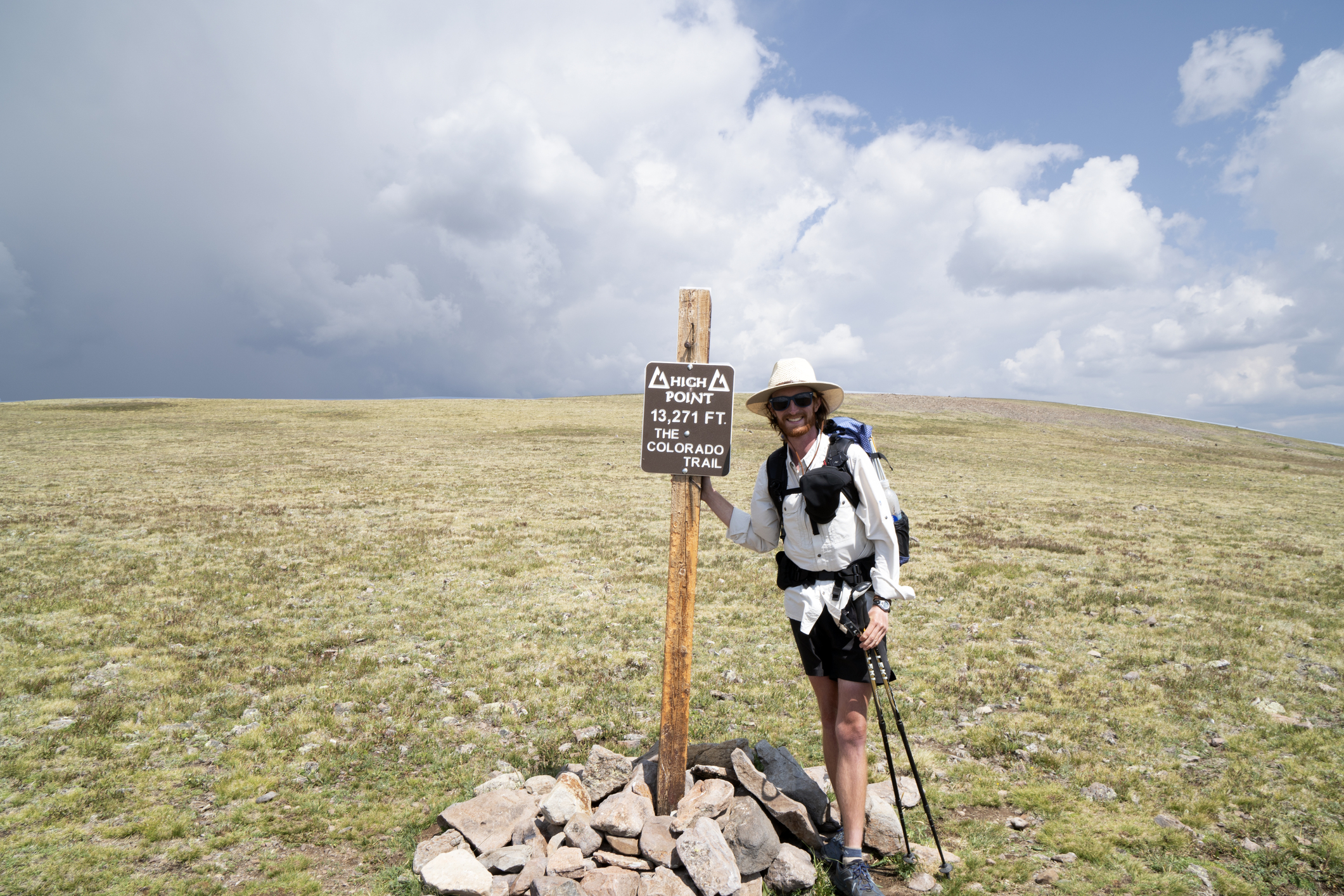 Ominous storm clouds in the background, but thankful for the sunny high point photo!

How can you prevent getting into a similar situation? Let’s count the ways:

When hiking above treeline (or in general), I encourage you to be keenly aware of the weather. Basic knowledge of weather (patterns, locale-specific meteorology, etc.) are feathers in your cap.

Hyperlite has enlisted a professional meteorologist for your viewing and reading pleasure. See his introductory post: Introducing Meteorologist and Photographer: Michael DeYoung. Michael has also crafted quite an extensive debrief about how to understand weather: And Now For a Look at the Weather: Deciphering Mountain Mysteries.

I highly recommend those, as they may increase the scope of your knowledge. For most of us in our normal lives, the weather is something we check to see if we should wear a sweater or pack an umbrella, which is mostly a minor inconvenience.

The importance of knowing the weather is heightened when outdoors. When in the backcountry, you are at its mercy, and it is something that can kill you or, at the very least, place you in a situation that is very dangerous. Hikers have died from hypothermia, lightning strikes, surprise snowstorms, etc. It’s the very quick turn of the weather that catches most hikers off guard.

Mother Nature may warn you of what is imminent. It is up to you whether you heed that warning and if you are prepared. I did not and could have paid a very steep price in this real-life example.

Hypothermia, by definition, is when your body loses heat faster than it can produce it, and that causes your body temperature to decrease. If your temperature falls below 95°F (98.6°F is considered “normal”), you have become hypothermic. I’ll go ahead and assume that you are not carrying a thermometer in the backcountry, so recognizing the symptoms is even more important! Even very mild hypothermia is an emergency due to the risk of continued decline in body temperature.

Depending on where you are and who you’re talking to, there are three or five stages of hypothermia. For the purpose of this article, we will use the simplified three stages. These should be identified as soon as possible because the longer you’re hypothermic, there is an increased likelihood your cognitive ability will decline.

* Typically, shivering will stop in this stage (this can cause false thinking that one is warming up).

It is important that once you have identified symptoms, you take action. So:

• Get out of the weather/be less exposed.

- Pitch your tent and get in your sleeping bag.

- Cotton is a NO in the backcountry—pack extra layers as a backup.

• Keep your gear as dry as possible, and your “reserve” clothes are kept dry at all costs.

• Hike with a partner when possible.

• Carry a fire-starting kit: cotton balls with Vaseline and matches/lighter in a Ziplock bag

2.) Know how to read the weather and be prepared.

3.) Know how to prevent, identify, and treat hypothermia.

Before I started the long ascent up to the pass, I had a chance to make camp even though the terrain was not perfect (see #1). I should have checked my ego (and pride) and made the decision to camp or at least wait out the storm at a lower elevation.

The thought of making camp crossed my mind because it was obvious the weather was getting increasingly unstable (see #2). Yet, making camp would have likely meant cutting my day short. Nonetheless, the lesson is to never let pushing miles compromise your safety. If you’re dead or severely injured, you will not be pushing any miles, much less hiking.

I became hypothermic in a very short amount of time and knew that I was hypothermic (see #3). The fact that I came across another hiker that could assist me was by chance. You may not be so lucky to run into someone that can help you. I was lucky, no doubt about it, and his assistance ensured my situation did not become more dire.

A common saying in backpacking circles is that “the trail provides.” The trail did provide for me that day–but it cannot always provide for you all the time. Know how to take care of yourself out there. Happy hiking! 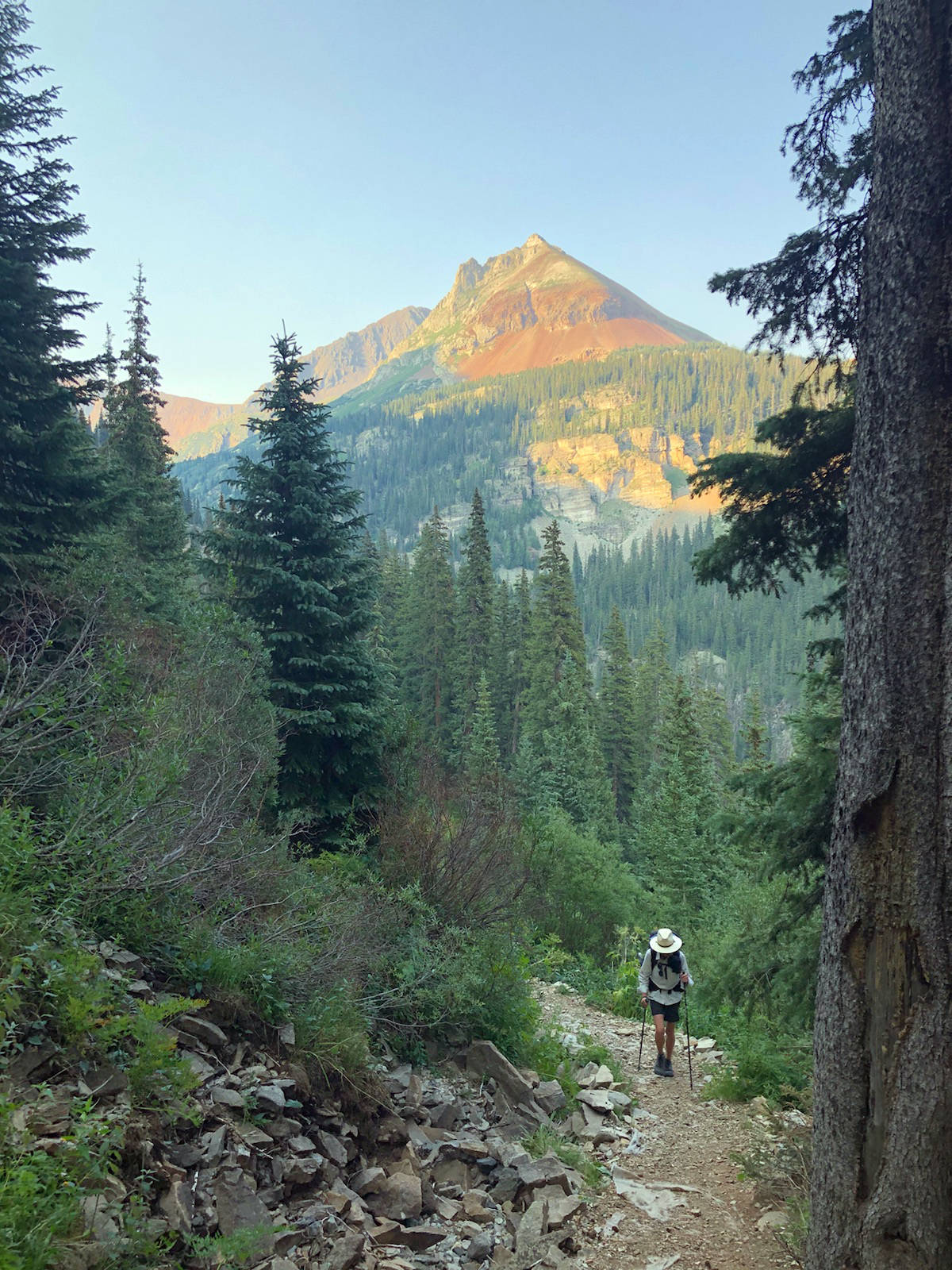 Dusk settles in as I ascend out of Cascade Creek.

Josh Sheets is a Social Worker and Adventurer. After completing the Appalachian Trail in 2011, he turned his focus to HIV social work. In subsequent years, he completed other trails including the Long Trail, Colorado Trail, Foothills Trail, Tahoe Rim, Laurel Highlands, Teton Crest and Wind River Range Traverses, and the Uinta Highline. He aims to complete the Pacific Crest Trail in 2022. He can be found and followed as “Soulslosher” on the social channels.