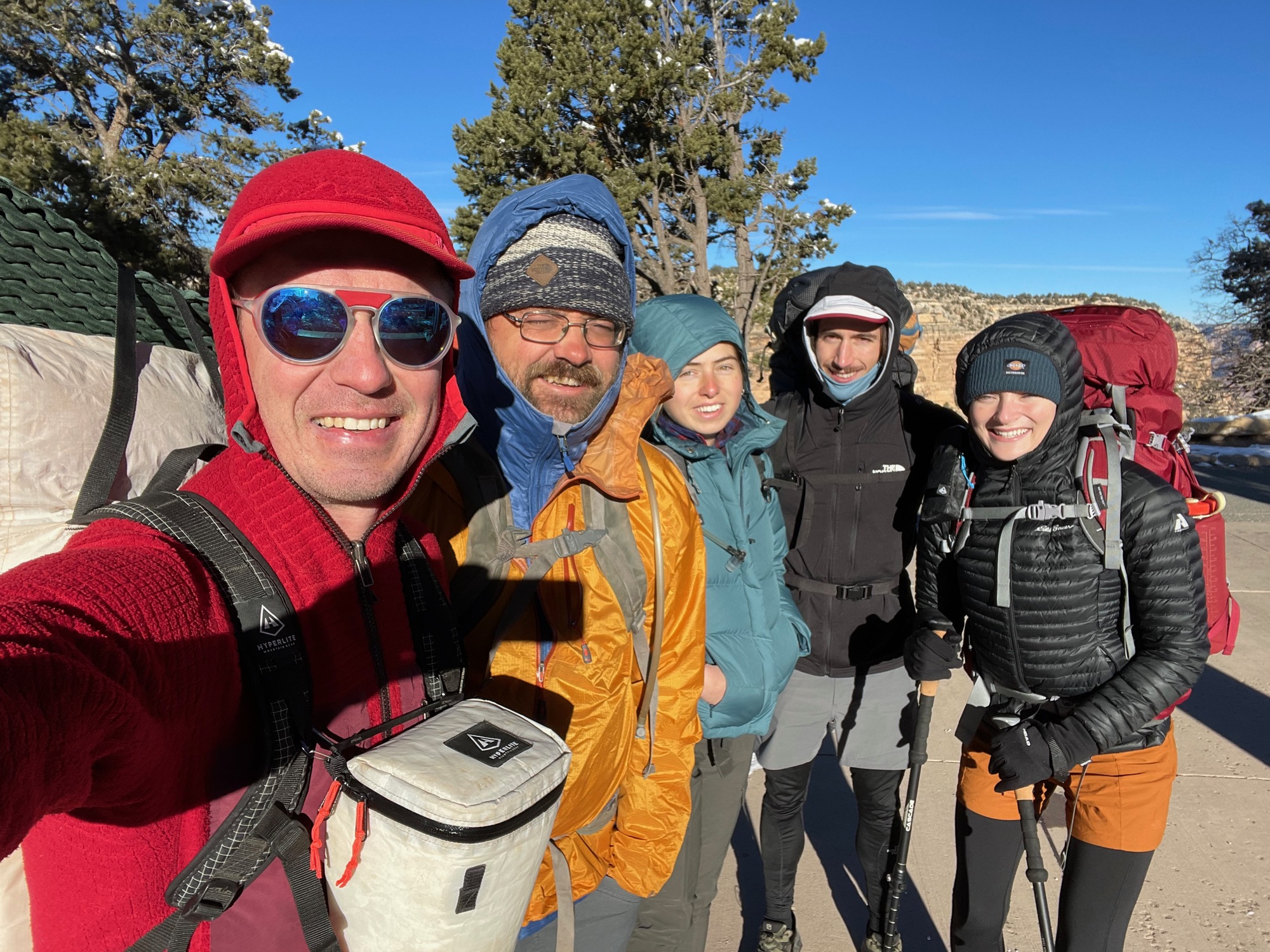 One of my favorite video games is Plants vs. Zombies. The opponents in successive levels get incrementally harder in such a way that the objectives remain challenging but doable, and you never lose interest from either boredom or frustration. Recently, I’ve been applying a similar philosophy to my Grand Canyon adventures, adding rappelling and packrafting to my backpacking routes in order to reach previously elusive territory.

After scratching the surface by visiting the north and south rims a few times during road trips, I finally ventured below the rim with two friends in May of 2015, doing two separate day trips and whetting my appetite for all that Grand Canyon had to offer. The daunting tasks of scheduling with friends and work, and then applying for backcountry permits four months in advance kept me from returning until 2018, but since then, I’ve spent about two weeks per year getting to know an impressive topography just slightly smaller than the state of Delaware. December forays in 2020 and 2021 taught me that packrafting in winter is cold and unenjoyable, but it’s a great time to hike and go canyoneering, so that was our plan for December 2022. Using information from Todd Martin’s excellent guidebook Grand Canyoneering, we planned to rappel down the east fork of Pipe Creek, spend two nights at Phantom Ranch, and hike out on our third day. On our middle day, I also hoped to summit my first Grand Canyon peak - Cheops Pyramid. 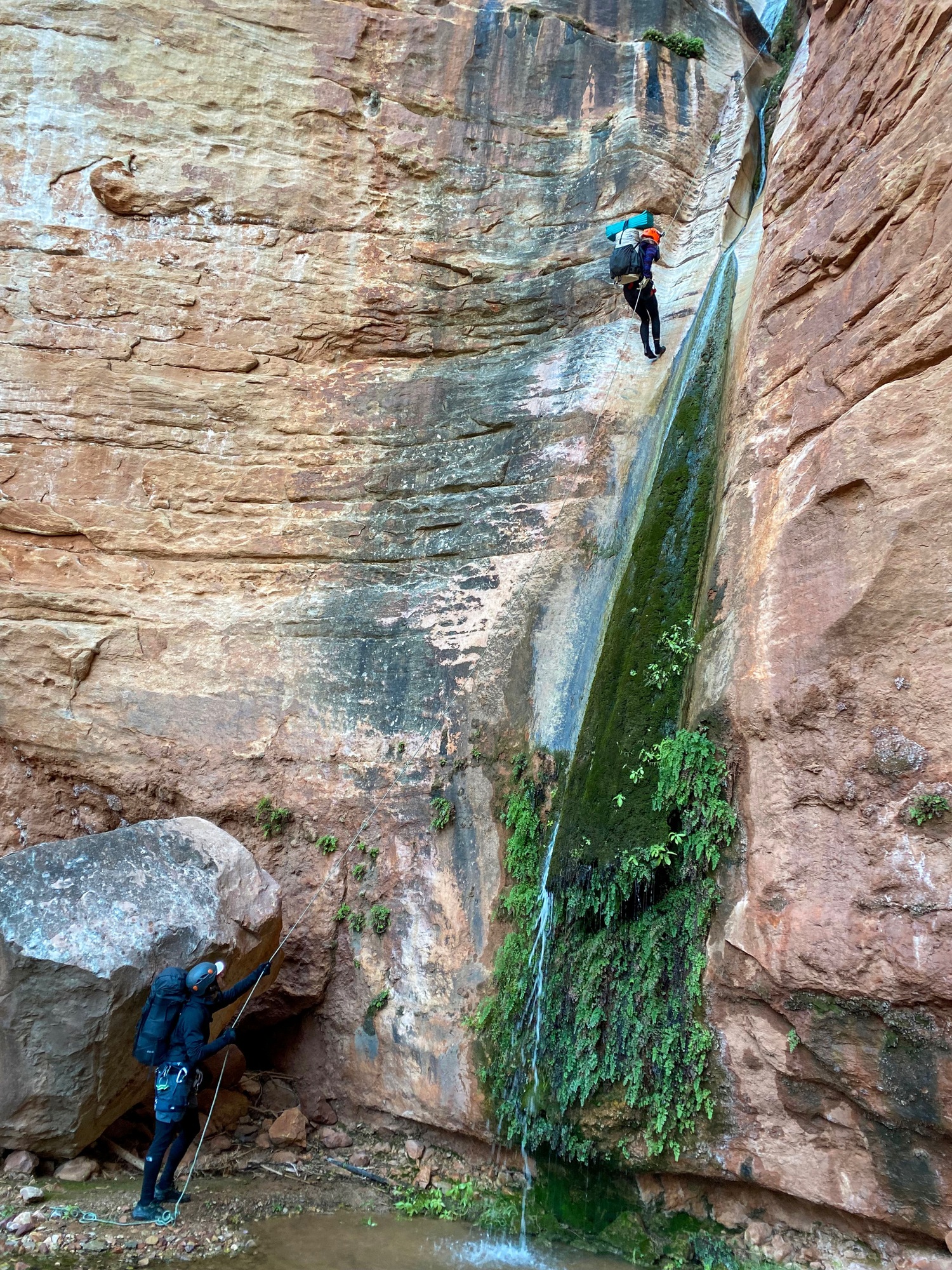 After work on Thursday, we drove from Phoenix to Mather Campground on the South Rim, where we spent a brisk evening with temperatures in the high 20s. It took a bit of time to get going on Friday morning, but we eventually got situated started down the Bright Angel trail around 9:20. 4.8 miles and 3,000’ in elevation loss brought us to the newly renamed Havasupai Gardens, where we took a brief break before continuing along the relatively flat Tonto Trail for 2.5 miles to the head of Pipe Creek East. Over the past 2.5 years, I’ve completed 13 technical canyons within Grand Canyon National Park that require ropes and rappelling to safely descend, so I felt very comfortable with this section of the trip, even if that specific canyon was new territory. 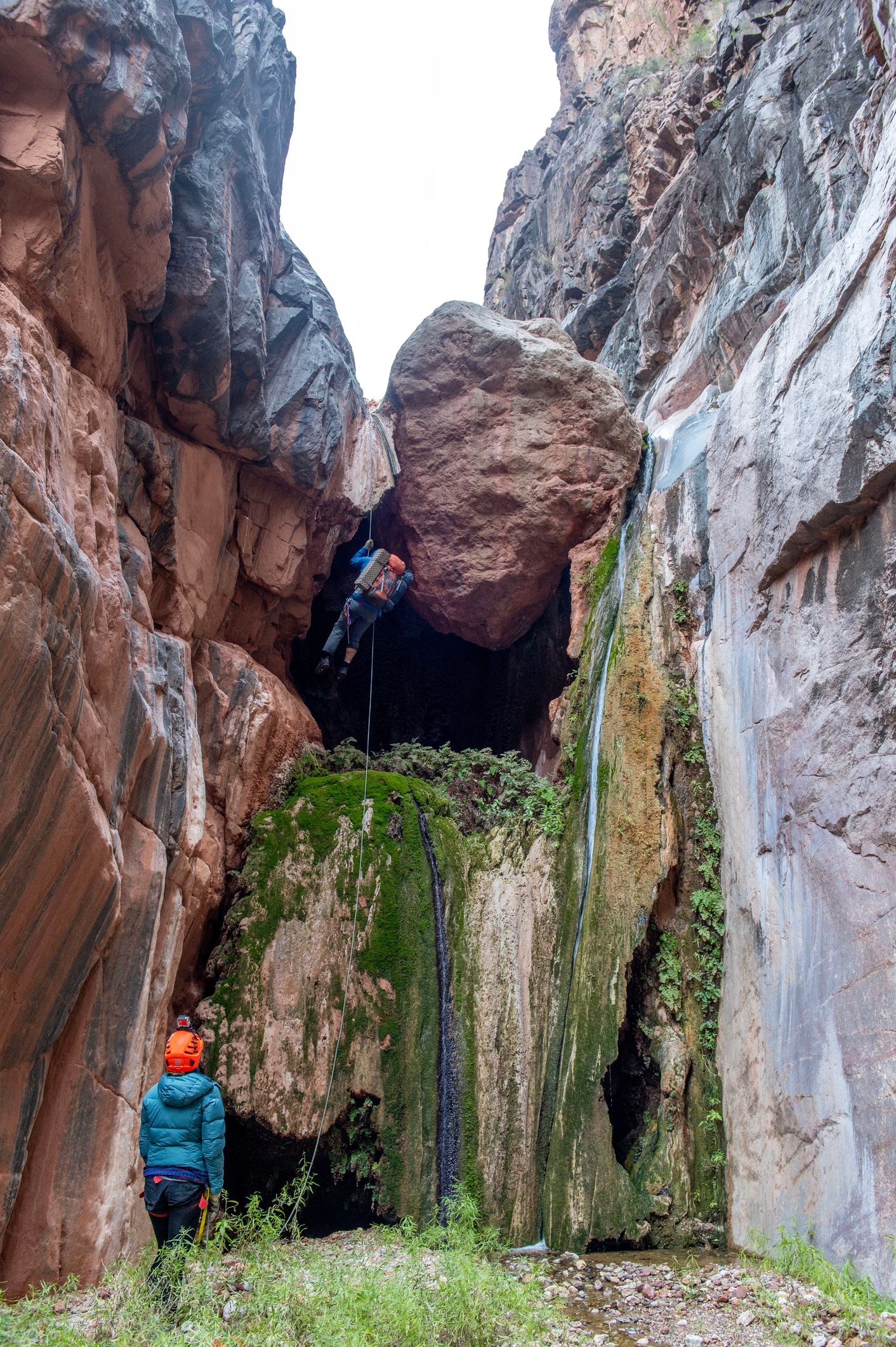 The only slight concern was what the trip report described as a “waist deep pool” part way down the first 120” rappel. We would be able to navigate through it, but we hoped we wouldn’t get too wet and cold. Luckily, we were able to mostly skirt around it, and neoprene socks were enough to keep us warm. There were three more smaller rappels over the course of the next 1.5 miles, and then we rejoined the Bright Angel Trail and took it another mile to the Colorado River. The final leg of the journey was 1.5 miles along the river trail to Phantom Ranch, where we made dinner and set up camp. In total, we did about 11.5 miles and 4,800 feet of descent in a leisurely 8.5 hours - all in all a successful day. 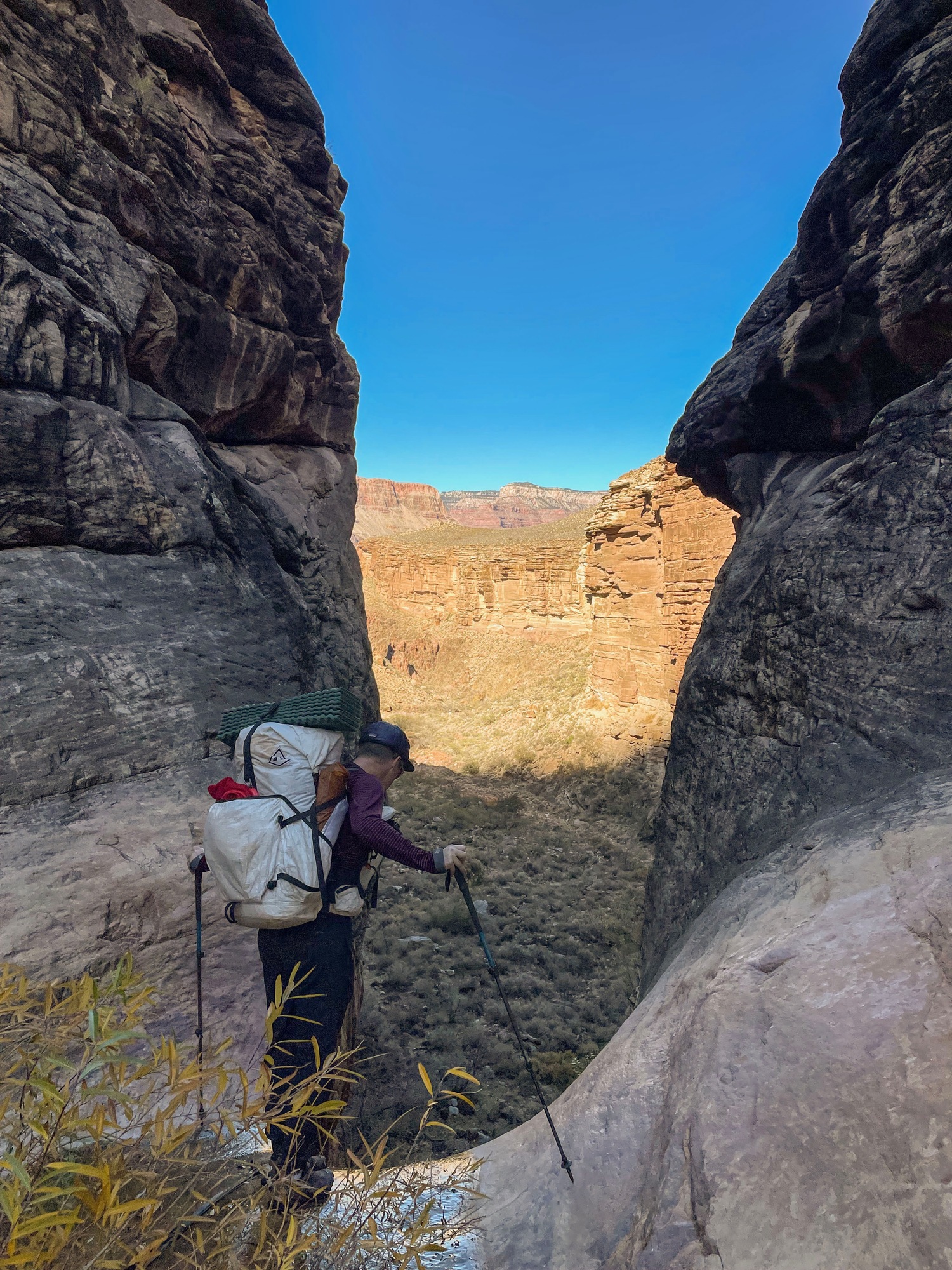 Generally, I have a hard time sitting still, even on “rest” days, but I know that other people sometimes prefer a slightly more low-key approach to their outdoor pursuits, so I try to plan options for everybody. On our second day, I had hoped to summit Cheops Plateau, which is about six miles and 3,000’ in elevation gain from Phantom Ranch and has an approach that provides many good opportunities to hang out and enjoy spectacular views. Our group of five set off with appropriate daytrip gear a little before 9am, and by about 10:45, three folks had decided to hang out and take in some inner canyon panoramas while two of us continued on in a bid for the summit. After another hour, we got to within 500’ of our goal, and I thought we were following the route Google had provided. Unfortunately, the terrain got a little too spicy for our combined comfort on that particular day - we were feeling overly exposed, and after some discussion, we elected to turn back. I was bummed not to complete the objective, but glad we gave it an honest shot. I’ll do some more research, and hopefully come up with a more favorable result on a future trip. After we reunited with the rest of our group, all five of us enjoyed the downhill back to camp, ate a tasty dinner, played some uno, and called it a night. 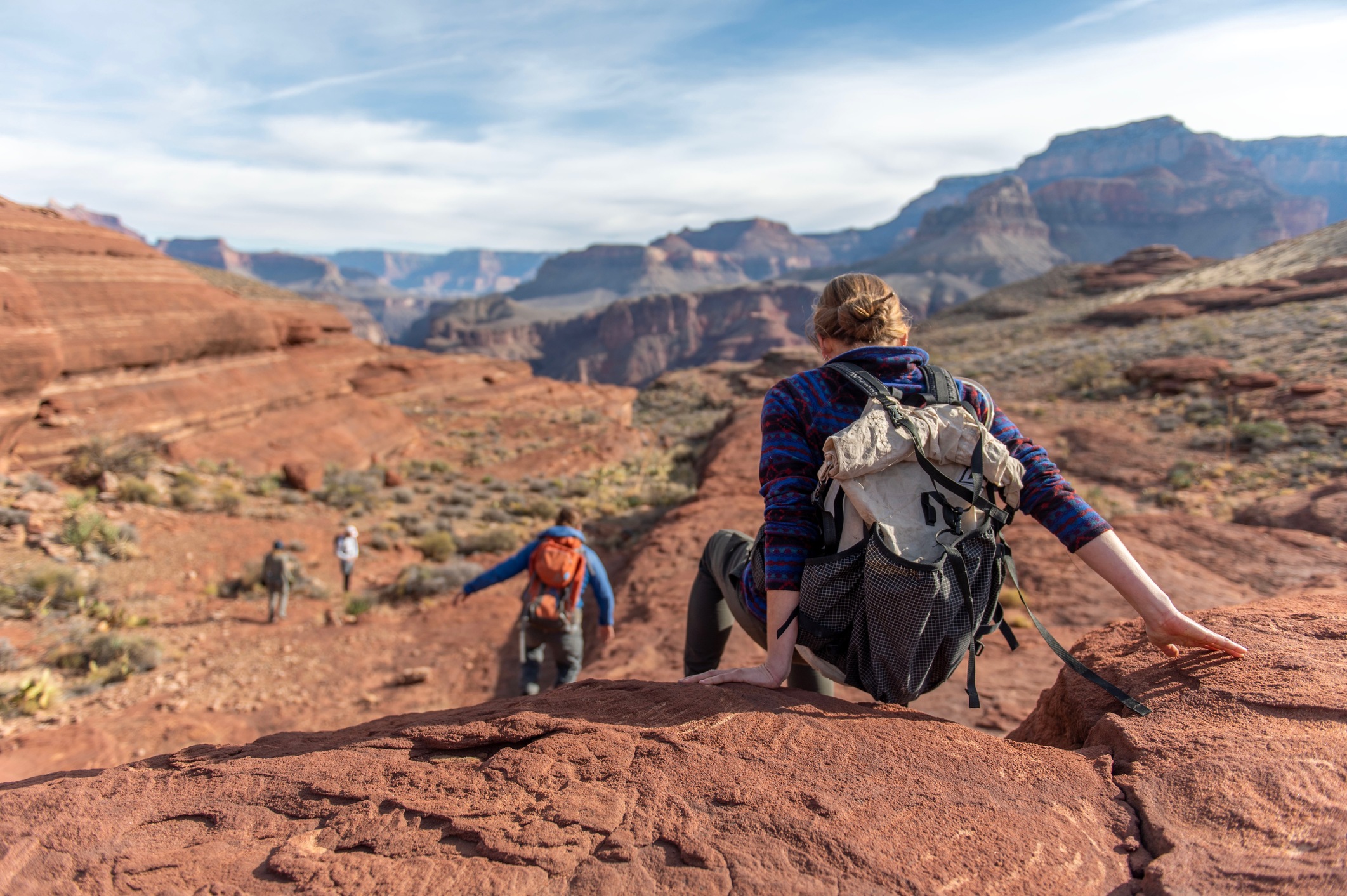 On Sunday, we were ready for the tough but straightforward task of hiking 9.5 miles and 4,500’ back to our cars on the South Rim. While I had trekked the entire length of the Bright Angel Trail many times before, I realized I had never hiked all the way out from Phantom Ranch along that route in a single day, always choosing the more direct South Kaibab trail. I was surprised by how much I preferred the relative shelter of longer route, which didn’t have quite as many epic vistas, but protected us from wind, and made the trek out significantly less taxing. As a bonus, we also had the opportunity to see a family of bighorn sheep near the end of the day.

On the whole, the trip wasn’t quite what I had planned, but spirits remained high throughout the trip, and armed with a little more info in the future, hopefully we can complete our objective.

Here’s the gear that helped make it happen.

HMG Northrim 4400 & pods - I could probably have fit everything in a smaller 3400 pack, but I wanted to have extra room for the rope and rappelling gear.