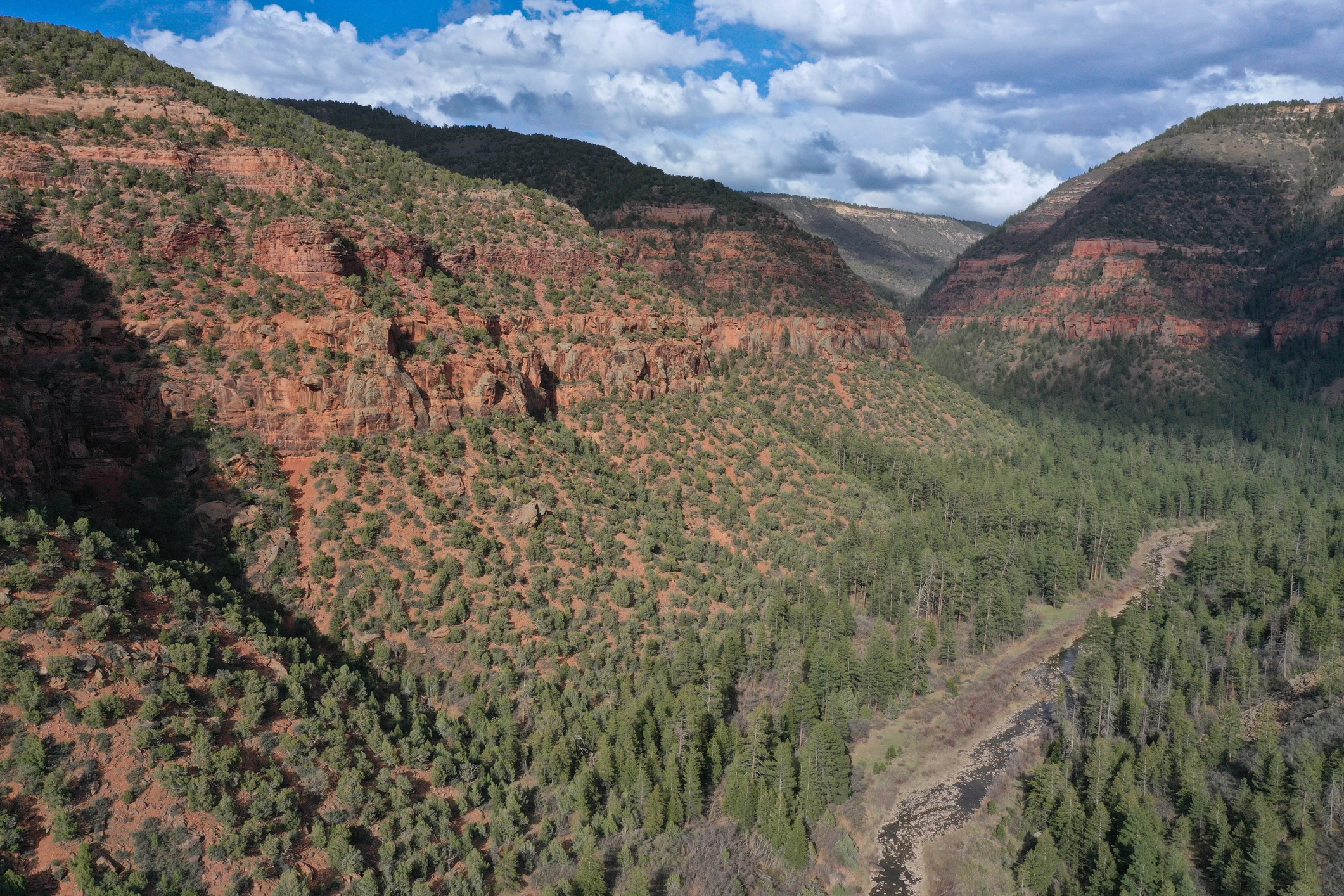 For 100 days, we had a drone stranded in some exceptionally rough terrain. After nailing the main sequence in a film project we're working on, the drone got sent off to start knifing shots of the surrounding landscape. We were a small group of river runners and filmmakers deep in the canyons of the Dolores River in southwest Colorado. Entranced by the golden light around us and totally losing spatial awareness in flight, we smoked the bird into a juniper at full speed. 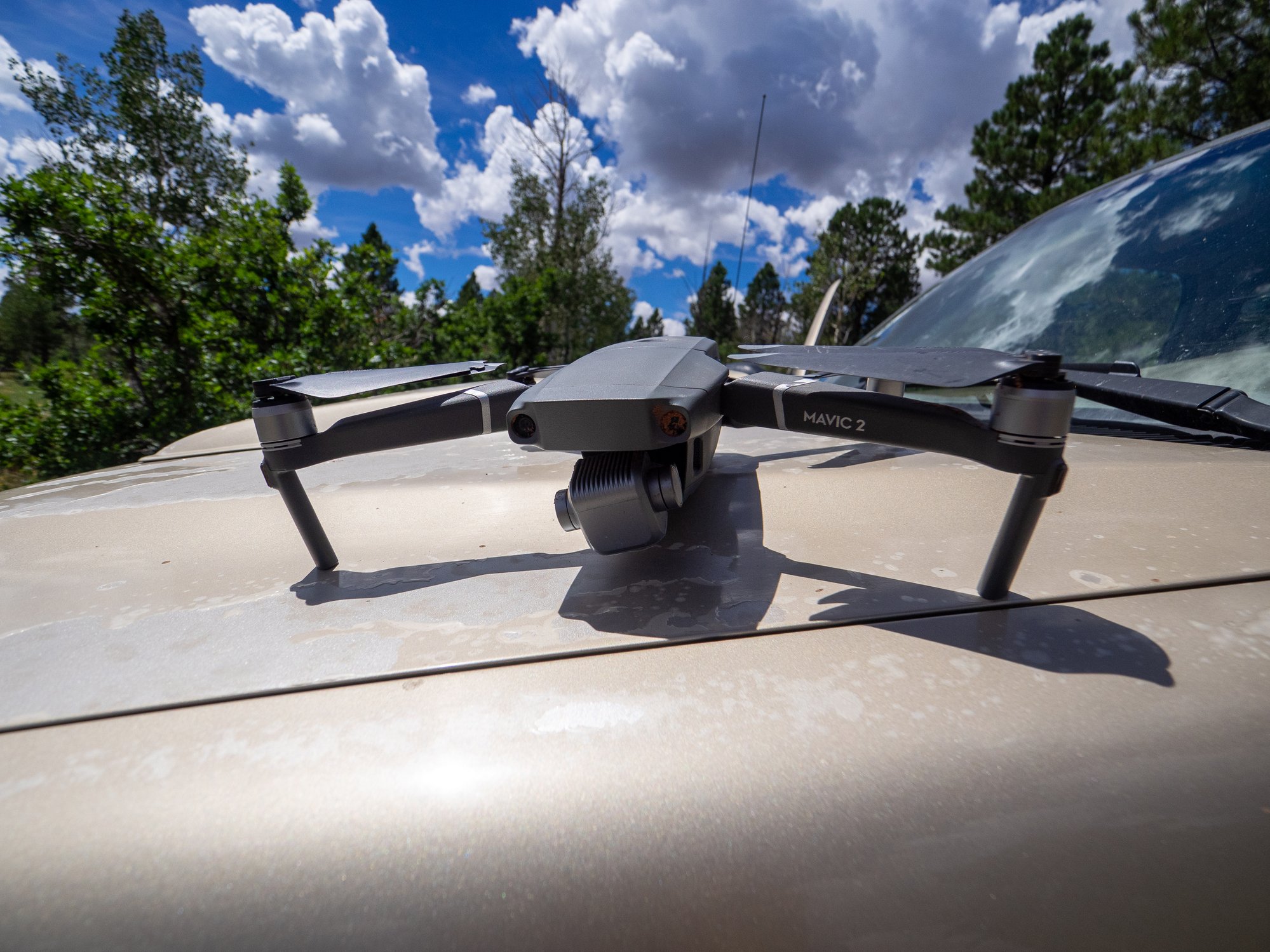 Early May is the start of the rafting season in Colorado and across most of the West. Typically, that means the rivers are coming up across the Rockies from warming temperatures and melting snow. Our team is assembled on the banks of the Dolores River, under the imposing hulk of McPhee dam: Brett Davis, river runner and director of Outdoor Pursuits at Fort Lewis College in Durango Colorado; Annie Bussell, local river runner and Alpacka Raft employee; and adventure filmmakers Ben Kraushaar and Cody Perry. 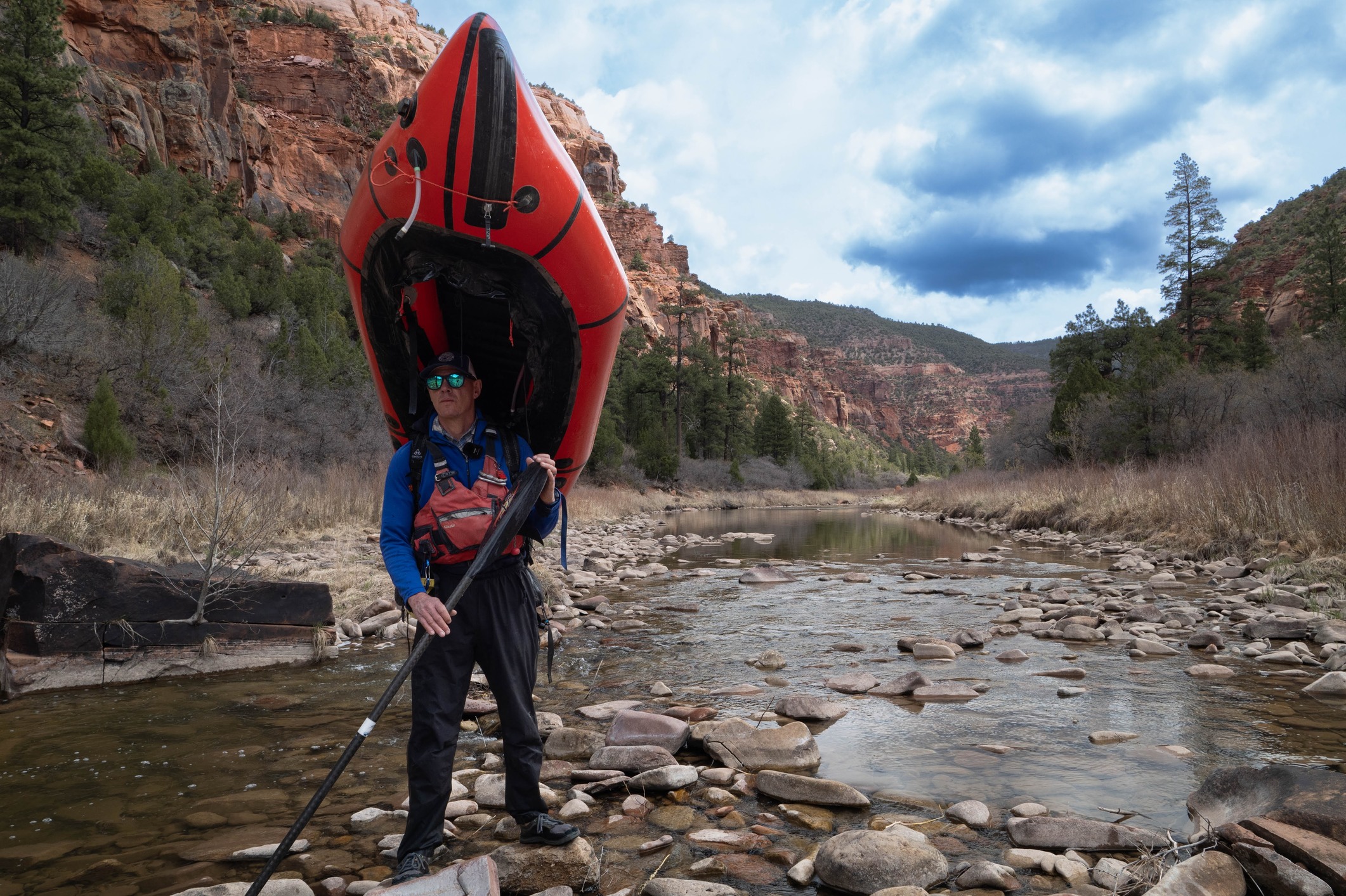 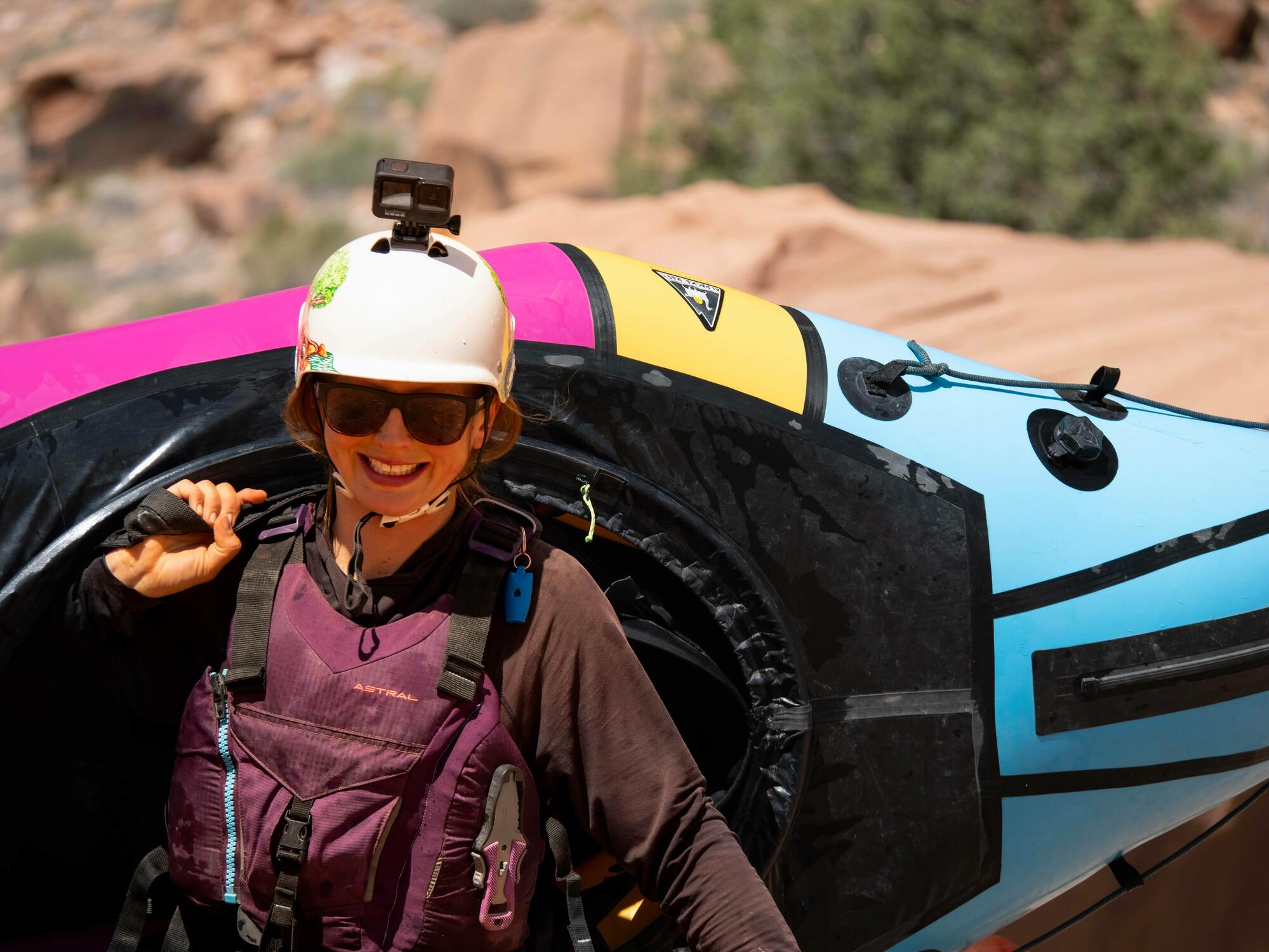 From the dam, we embarked on a 200-mile river expedition down the Dolores River, once widely regarded as one of the top three multi-day rafting adventures in the West. Most of the water is diverted into the adjacent basin; channeled through a network of canals, ditches, pipes, and sprinklers; to be converted into alfalfa, corn, and cows. Above the dam, the river is swollen with melting snow. Below it, there's barely any water in the riverbed. Our mission was focused on encountering the reality of a dewatered Dolores River. To see firsthand the impacts of western water use for ourselves. 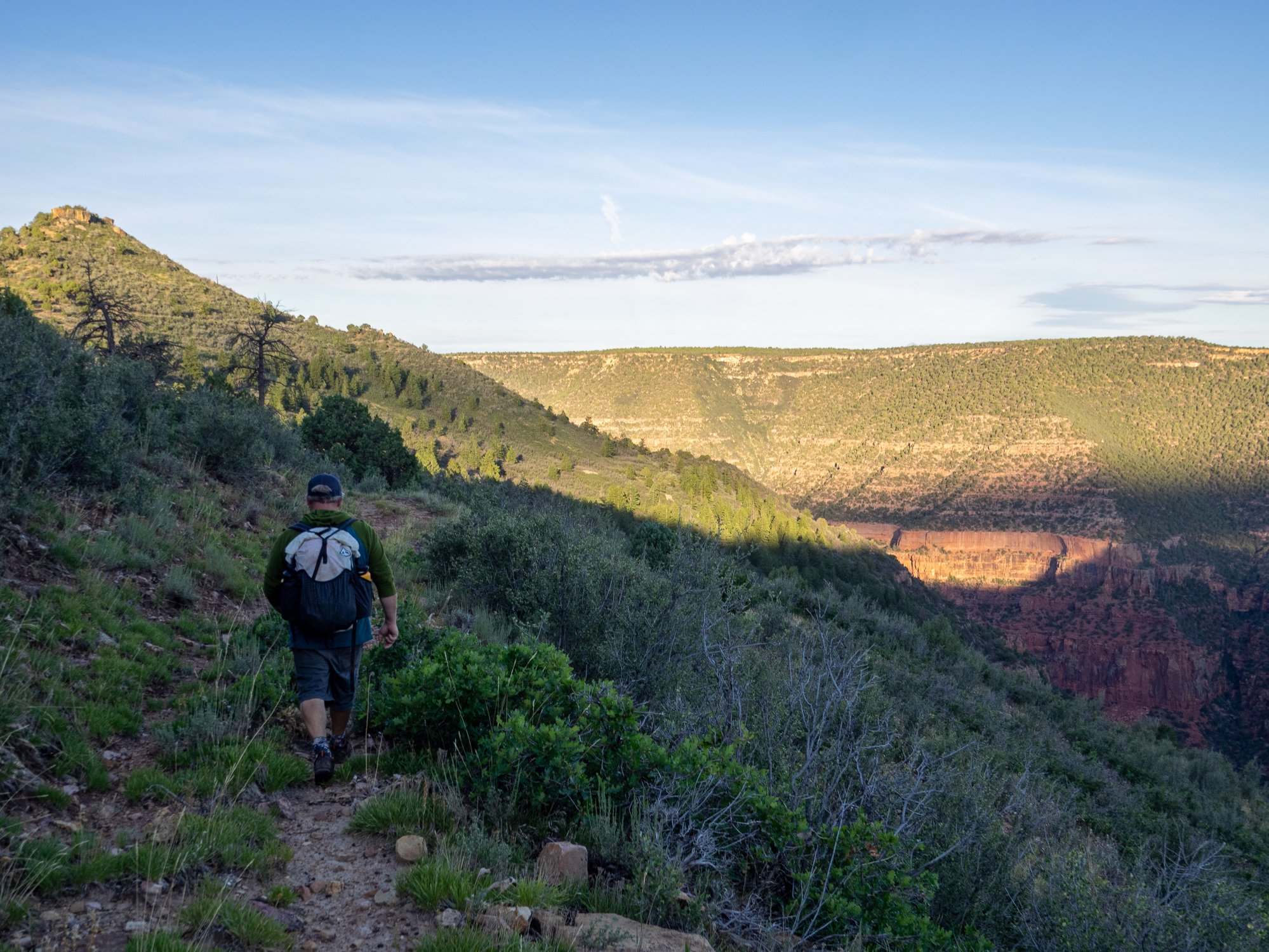 "Adventure style!" exclaimed Brett–meaning we'd use any means possible to get down the water-starved river–hike, float a pool, hike some more, and repeat. This trip would be rather straightforward if all we had to do was float. At times we'd be forced on foot to bushwhack through thick vegetation, balance precariously for miles on unstable cobbles, and trudge through shoe-sucking mud. Tributaries would eventually provide more water as we moved downstream, but the first 90 miles would be a slog.

Surprisingly, travel wasn't that difficult at first, and we resorted to some easy hiking before encountering pools large enough to paddle–boatable lines emerging through the rocky riverbed. Golden evening light colored the land around us. We got some killer shots, but that all ended abruptly when Cody exclaimed, "Oh shit! I just crashed."

Adventure filmmaking is a whole other level of work and skill to pair with expedition behavior. Outdoor etiquette, the skills, and familiarity from extended time in the field can go on autopilot when you're running down a "shot" list. Filming is intensive work requiring focus, determination, intuition, and a lot of luck. There's the ecstasy of nailing the perfect shot; and the crushing agony of failure and loss. In this case, the bummer isn't so much losing the drone itself but what's on the card. Things tend to work out, but when they don't, it's better to keep your eye on the big picture than spiral downward into gloom and doom. 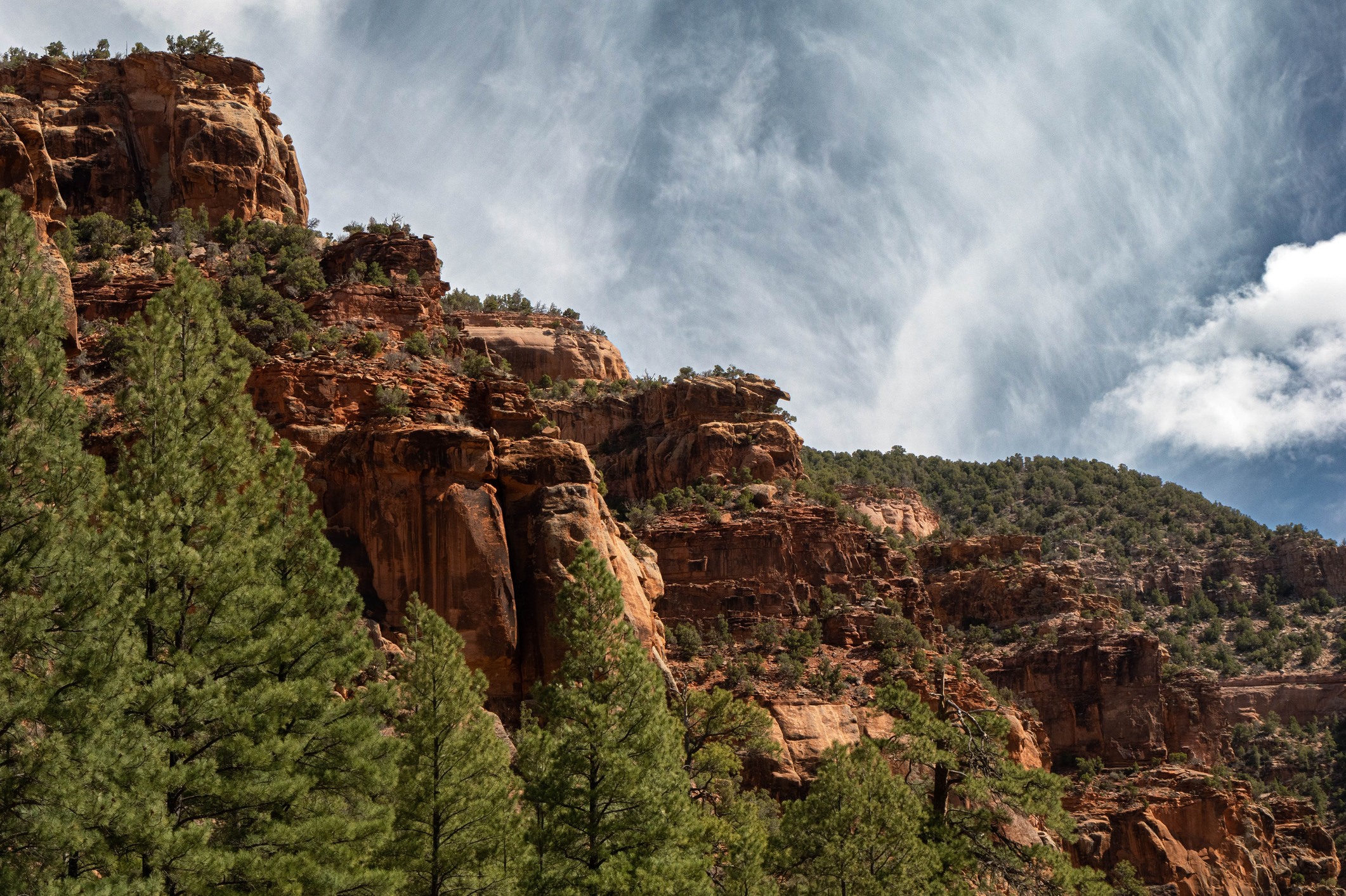 The show must go on. Any attempt to recover the drone would have to come later. We broke camp and continued the journey. The days ahead would test us physically and mentally again and again. At times the river gradient would flatten, allowing for large pools to form and time to paddle. Then step down into miles of steeper drops, confined by sheer canyon walls. Forcing us to walk in the irregular, unstable riverbed and murky water. We all had moments thinking how absurd this was but also moments to take in the sublime beauty around us. After three 13-hour days of endless repetition that saw us getting in and out of our boats caked in salt and mud, we hiked the final miles to arrive at the midway point in Bedrock, CO. From here the journey would become much easier as the San Miguel River joins the Dolores, providing enough water to paddle the remaining distance.

Eventually, we successfully completed our trip objectives by reaching the Colorado River and documenting the journey. As summer went on, many more trips would be made around the Dolores backcountry to gather additional landscape and wildlife imagery, including multiple attempts to recover the lost drone.

Each mission was informative but did not yield a positive result. We would navigate a maze of densely packed vegetation and cliff bands only to return empty-handed, but also with a better understanding of the complex terrain where our bird was located. An old four-wheel-drive road took us from a mesa top of aspens down into a land of ponderosa and junipers. From there, our coordinates directed us to descend off the road requiring us to be diligent with each step on a loose and rocky slope. The first small rocky outcrops were easy to negotiate with a scout here and there to find a safe scramble down. Progress was growing slower in the increasingly tight and vertical terrain. As we got closer to the coordinates of our prey, we were stymied by a 50-foot cliff that would involve the use of technical gear and the corresponding skill set to safely continue towards the drone. This is where previous attempts had ended, lacking the gear and technical skills required to negotiate such terrain. 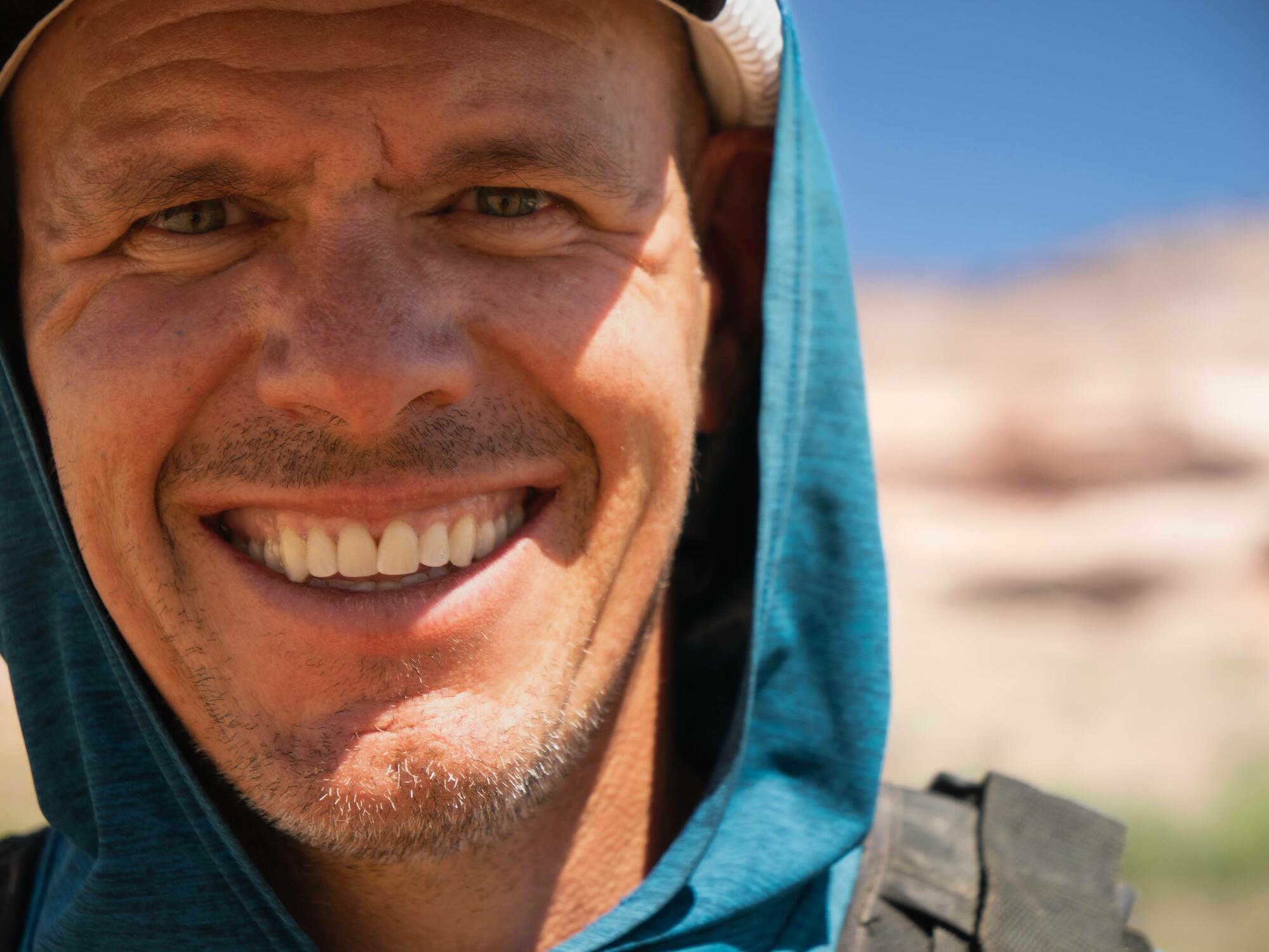 Through years of working as an outdoor educator, Brett has gained a multitude of technical skill sets, one of which is experience with anchors, rope work, and climbing in the vertical world. In a closing window of opportunity due to the busyness of our schedules, Brett and Cody decided to make one last try. At this point, the drone had been on the cliffs for the duration of the summer and had been subjected to intense monsoonal rain events. Be that as it was, they're incredibly resilient little machines. If we could only find it, not only would we most likely recover the footage, but also a functioning drone.

Waking before dawn, we packed our HMG packs for the day ahead with ropes, harnesses, helmets, ascending/descending devices, webbing, extra layers, and food and water. By sunrise, we were descending the ever-familiar four-wheel drive road. The scramble down through the initial rock bands went quickly. Before we knew it, Brett was walking the edge of our previously impassable cliff, looking for a viable anchor point to set up a rappel while Cody gazed towards the bottom of the cliff, looking hopefully for the stranded bird. 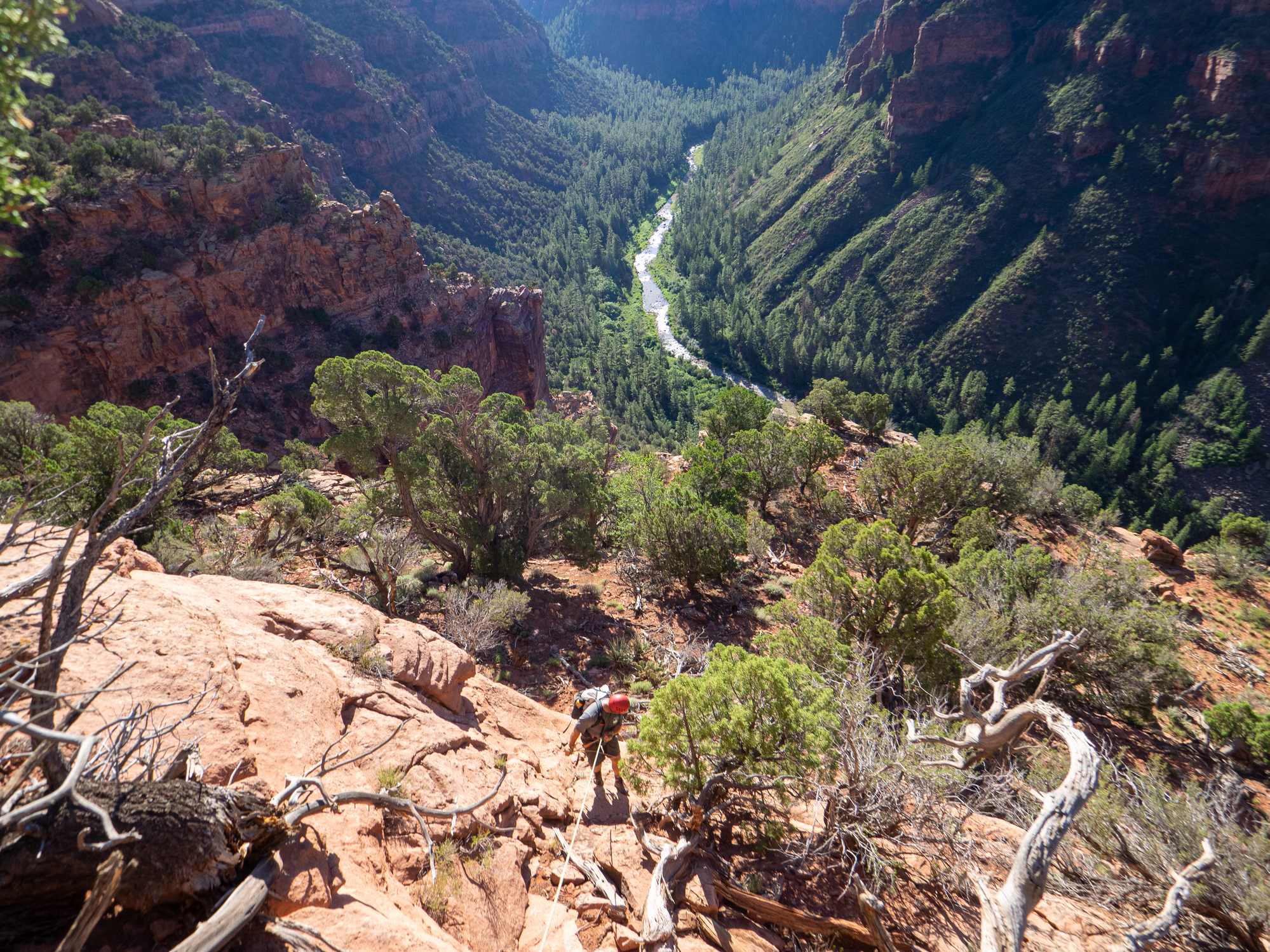 A sense of vertigo crept in, leaning out and weighting the rope over the gaping drop-off. The Dolores River was far below–still just a trickle of water flowing down it. We recognized the stretch of river that we had been filming to capture that golden hour of light. The moment of full-send of the drone into the tree and tumbling to an unknown rest. There was that evening's camp where we scrambled from and initiated a fruitless search. A renewed sense of hope took over as we each slid down the fixed line. 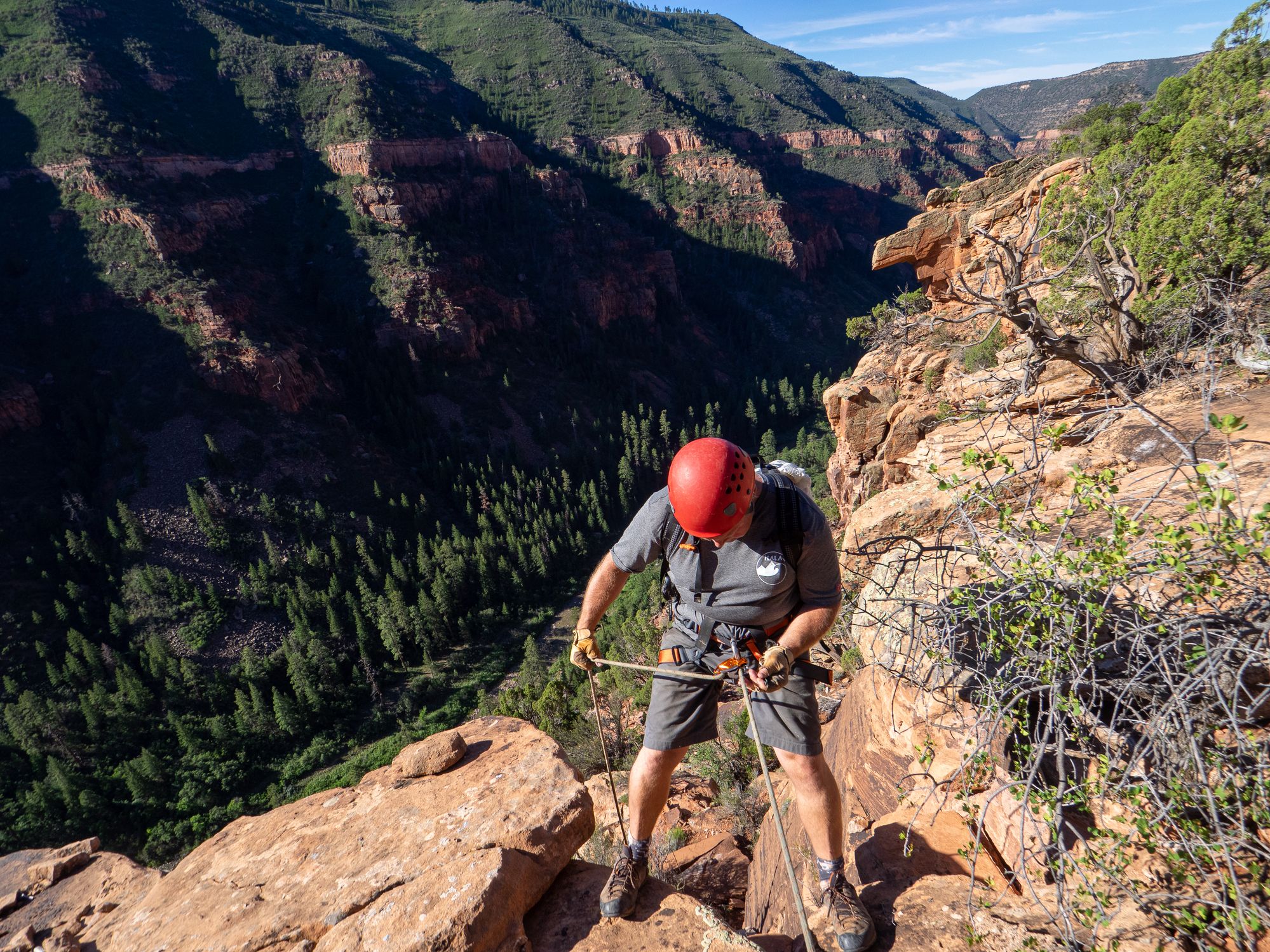 We landed at the base of the cliff band, but the blue dot, the last known coordinates of our prize, was still many contour lines below us. After another short scramble, we were on top of yet another cliff band that would have to be negotiated by rope. Brett did his thing, and we were soon lowering ourselves down another 60 feet of vertical sandstone. Our benches were becoming increasingly smaller and narrower. Where was the bird? 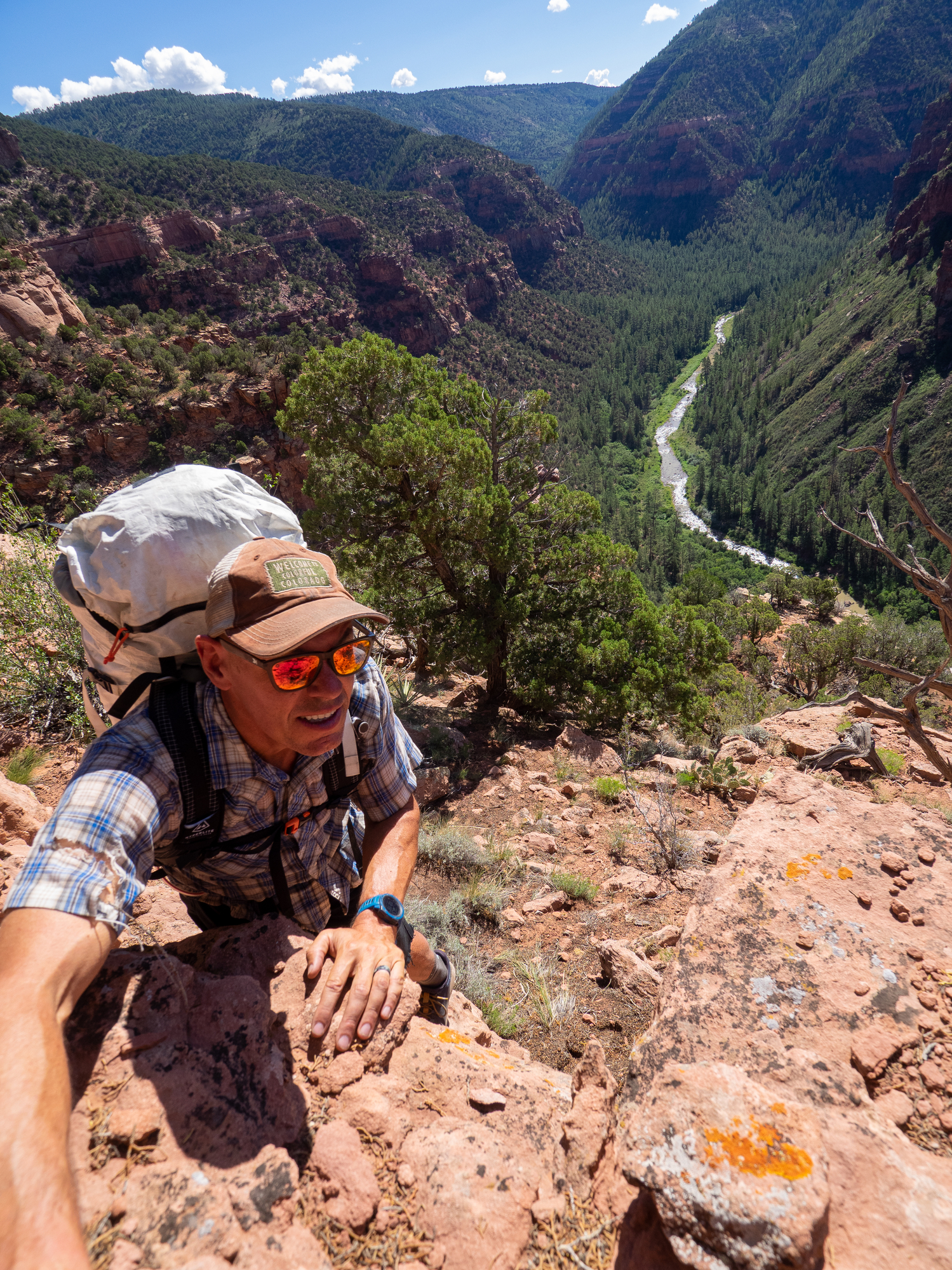 Scanning for familiar landmarks, we compared a crude recording of the drone's crash footage on Cody's phone. Looking for a unique shape of the cliff and that one tree that disrupted the drone's flight path. Despair began to set in. Everything looked alike, and we were out of searchable terrain. This was the last bench above the 250-foot cliff that we couldn't overcome when searching from the bottom. If our drone was on a small ledge somewhere on the sheer cliff face, the search for the "needle" in the haystack would have just gotten more desperate. 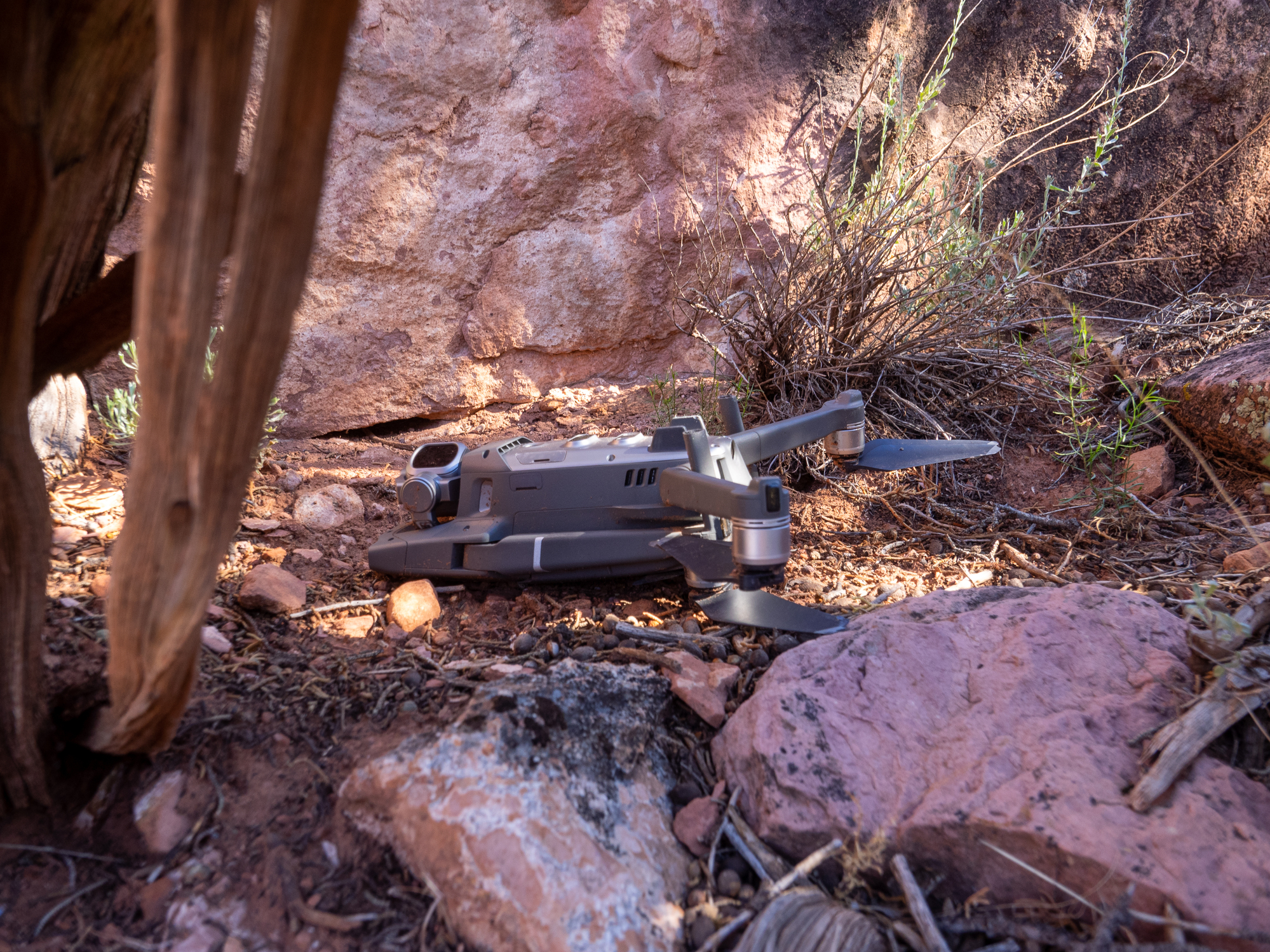 Looking down at the dizzying precipice below, Brett shattered the silence exclaiming, "Heck Yeah! Here it is!" His voice came from fifteen yards away on our current bench. Looking down, Cody saw him on his hands and knees, reaching under an exposed root of an old juniper tree–like it had been protected in a cradle. The gleam in Brett's eye and his wry smile displayed his stoke for having found our needle. He thrust it skyward in ceremony. You'll never find anything that's lost if you don't try. 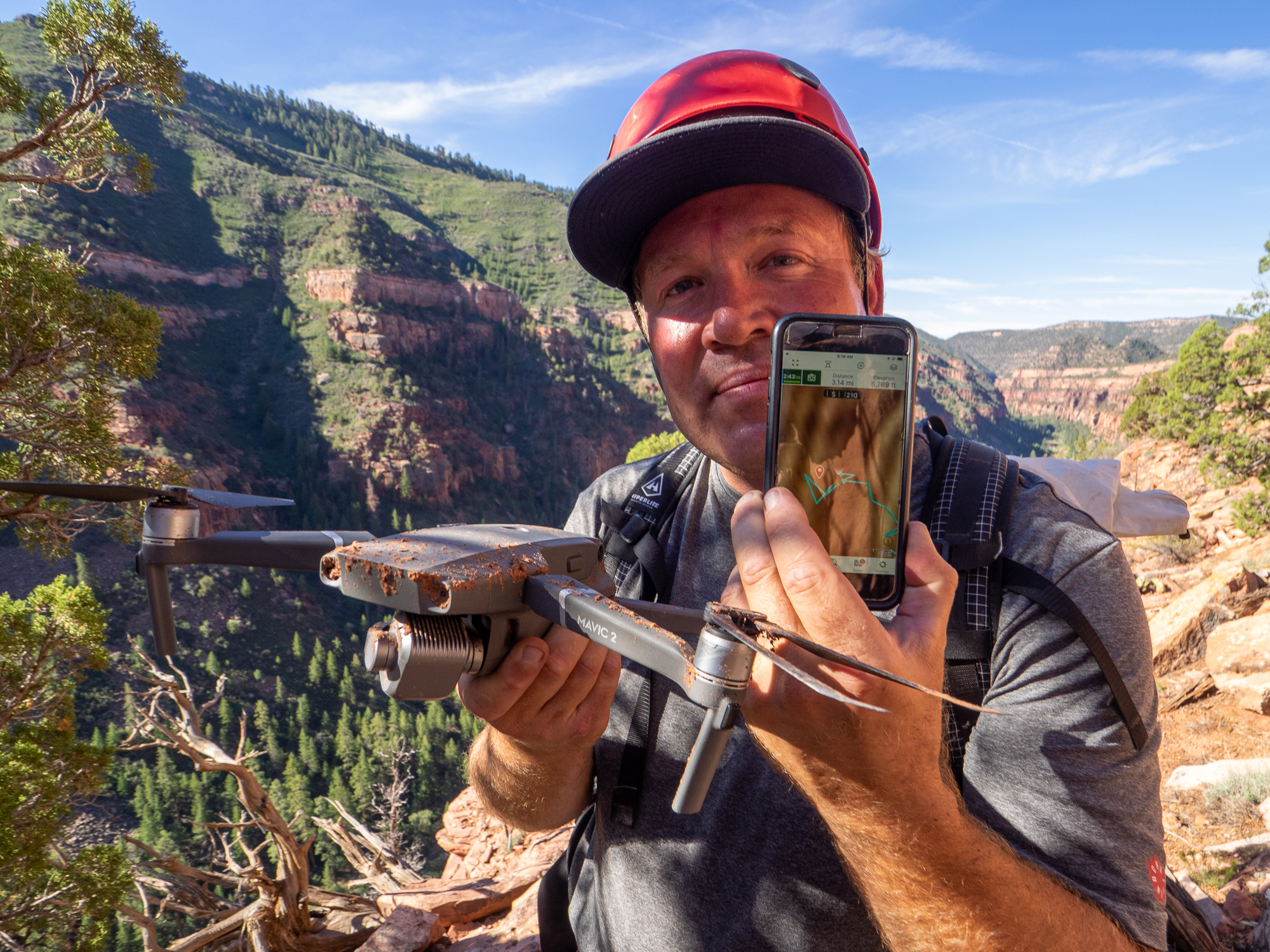 From there, the day turned to Brett's school of ascending ropes, and we worked our way safely home. Later that evening, we dropped a fresh battery into the drone to see if it would power up. Just as we thought, the bird came right back to life as if nothing had happened to it. The best part, though, was that the SD card was undamaged. All the captured film footage was intact–richer and more beautiful than we remembered. The adventure filmmaking gods had given us a lucky break.

The adventure filmmaking exploits of Cody and Ben can be followed on their Instagram accounts @rigtoflip and @Benjamin_Kraushaar. Brett can be followed @brettrdavis or visit www.thelessoncollective.com.