I Didn't Know I Could Make a Banner?! - 10th Mountain Division Hut to Hut, Colorado 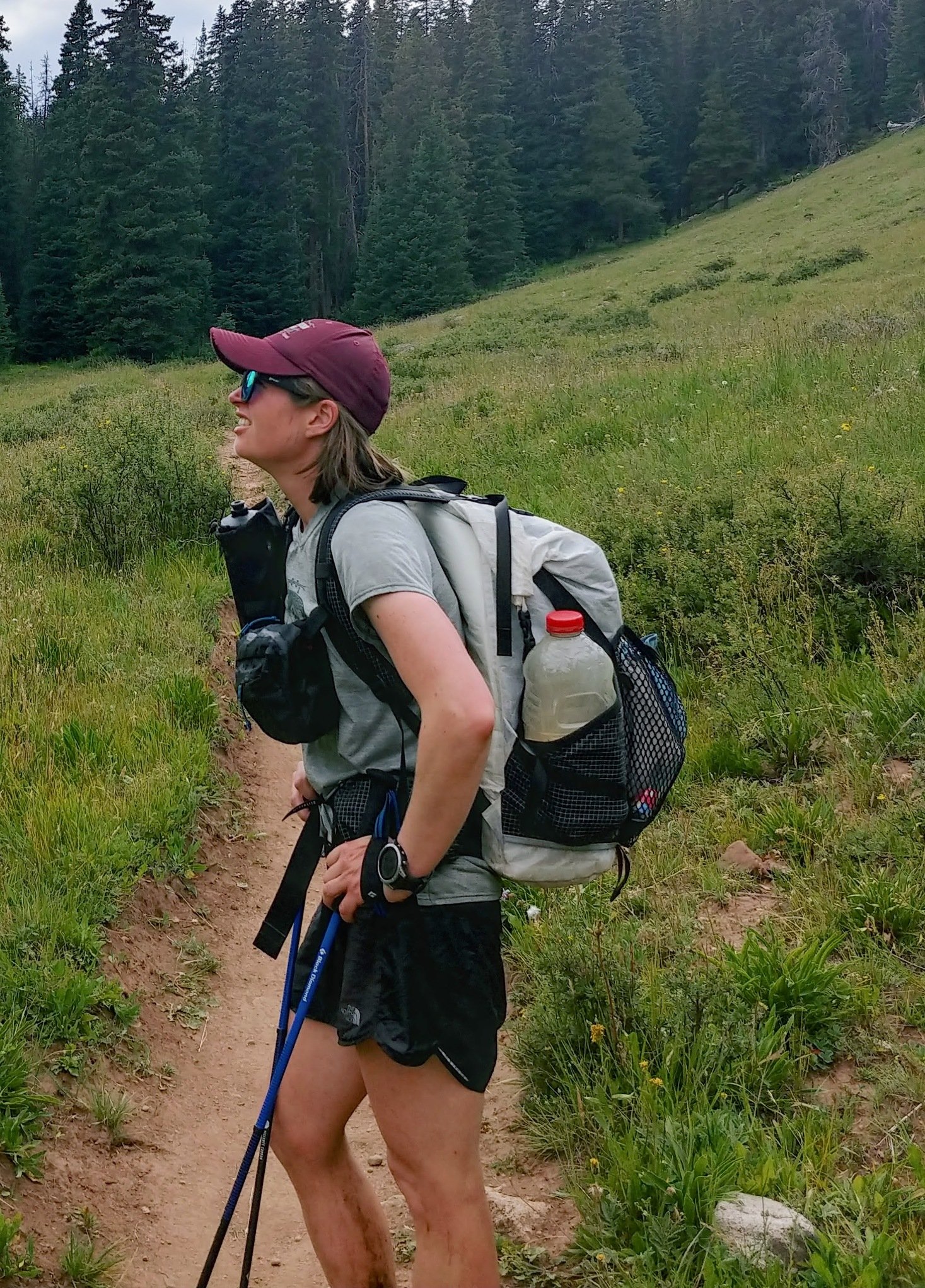 After learning about Mats Roing’s thru-hike of the New Hampshire 48 Direttissima in Steve Smith’s The 4000-Footers of the White Mountains, I came up with what I thought would be the best route to connect the peaks. An off-handed comment that “I’ll hike them all” while I was at the Ethan Pond Shelter during my Direttissima hike in 2014 inspired me to create the Northeast 115 route in 2020. I enjoyed the process of building out my own maps and data sheets to plan and visualize the routes as much as I did hiking them. Since moving to Colorado, I’ve wanted to come up with similarly unique challenges. During the winter, the map below inspired me to attempt to create a route between all of the huts booked through the 10th Mountain Division website, www.huts.org. I was thinking of a longer version of the White Mountain Hut to Hut route. 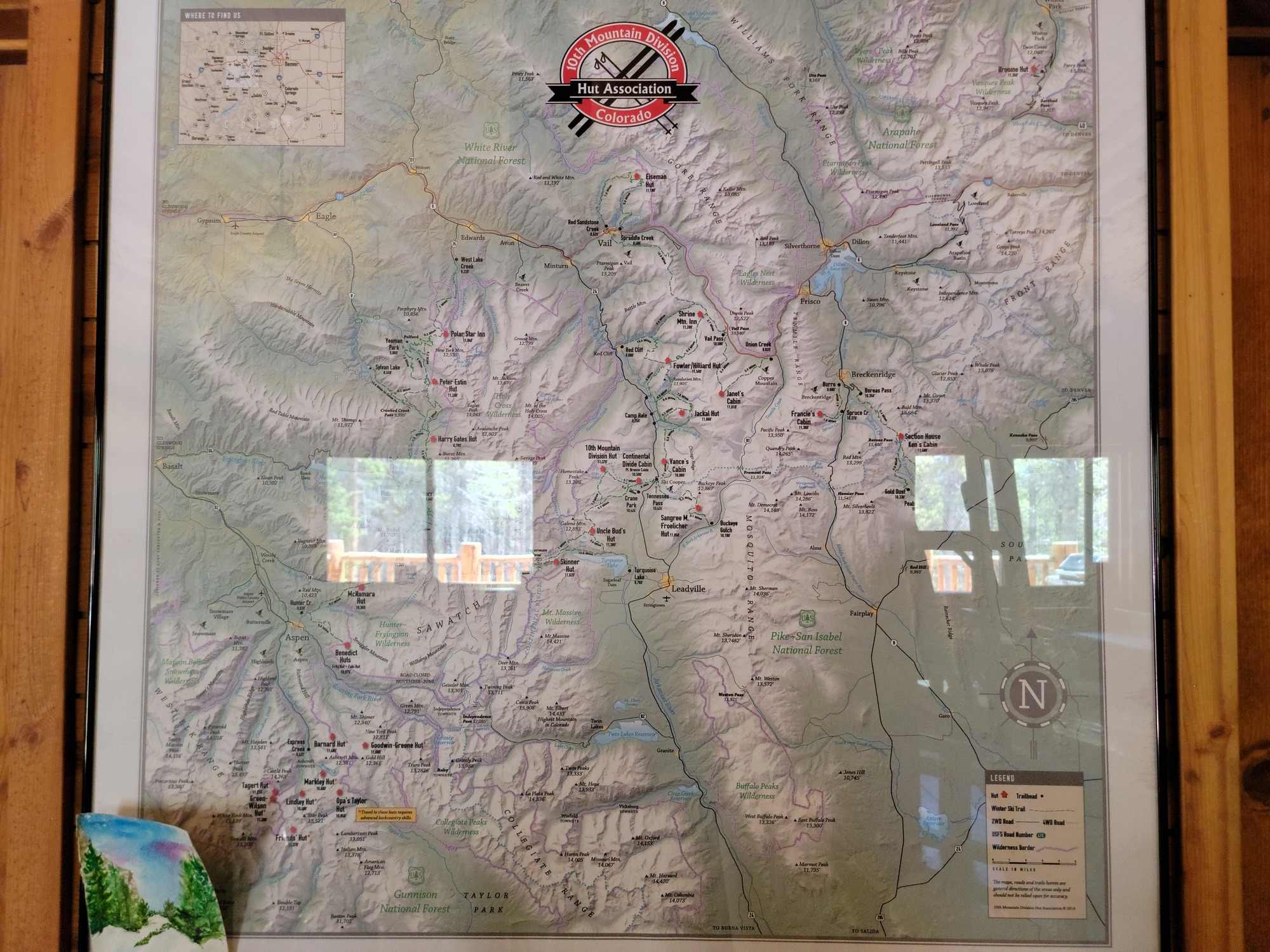 The 10th Mountain Division trained at Camp Hale and fought in some of the roughest terrain in the Italian Alps during World War II. They pushed beyond Reschen Pass to reach Nauders, Austria in May 1945 and helped the 44th Infantry Division facilitate the surrender of German forces. After World War II, many returned to Colorado and founded the recreational ski industry in the United States. One created the first ski area in Colorado, Arapahoe Basin, in 1946. 62 ski resorts have been founded, managed, or employed head ski instructors that were 10th Mountain veterans, including Aspen, Vail, Ski Cooper, Winter Park, Loveland, Sugarbush, Whiteface, and Crystal Mountain. 10th Mountain veterans also founded Outward Bound, Nike, The Sierra Club, NOLS, and the High Alpine Avalanche Research Station. Over 2,000 of them became ski instructors. 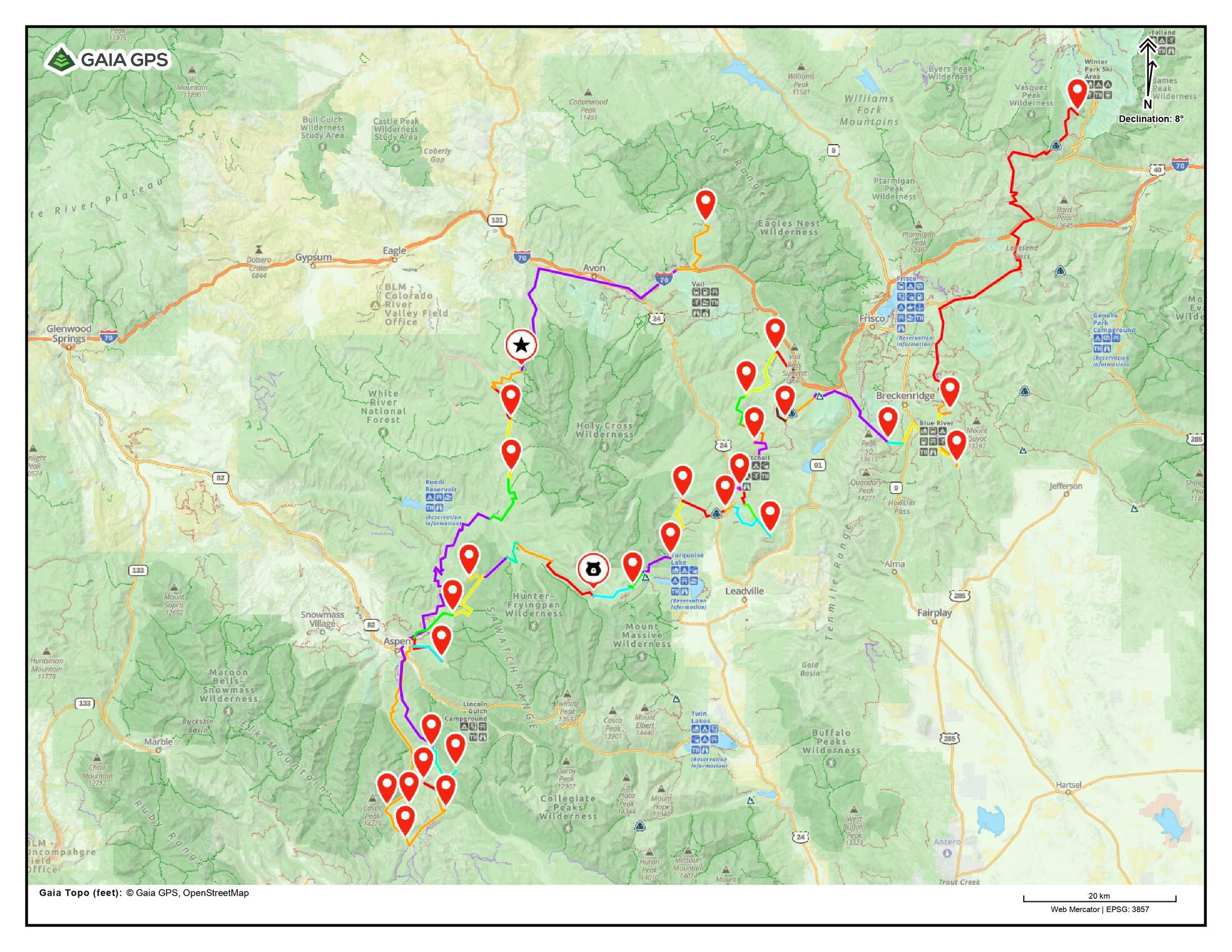 I live in Leadville and was familiar with the general area of the huts, but I’d only been to a few of them before the trip. I’ve helped Lee Rimel, owner of Point Breeze and Continental Divide Cabins with work at his huts. By mid-August, afternoon thunderstorms are usually lighter and there are still a lot of daylight hours so it seemed like the ideal time for the trip. I ran the Silver Rush 50 Trail Race in Leadville in July, and the training for that had me feeling well-prepared for what looked like a difficult route. There were still a lot of unknowns about following blue diamond routes in summer, but I found no closures. As a result of the pandemic, the 10th Mountain Huts were still single-party booking only, so I wouldn’t be able to stay at any of them unless I reserved the entire hut. I planned to camp every night and move through areas of swamps and untamed willows. My default for backpacking in the wet terrain of the Northeast is to carry three pairs of socks and I continued that on this trip. Since this is Colorado, I’ve added a sun shirt to my usual layering system. I packed a Garmin Mini InReach2 for communication and weather reports in remote areas and used a Versa and Bottle Pocket to reduce stopping and opening my pack. My tarp, groundsheet, and sleeping pad went in a small Pod, which I also used for extra isolation of wet items. 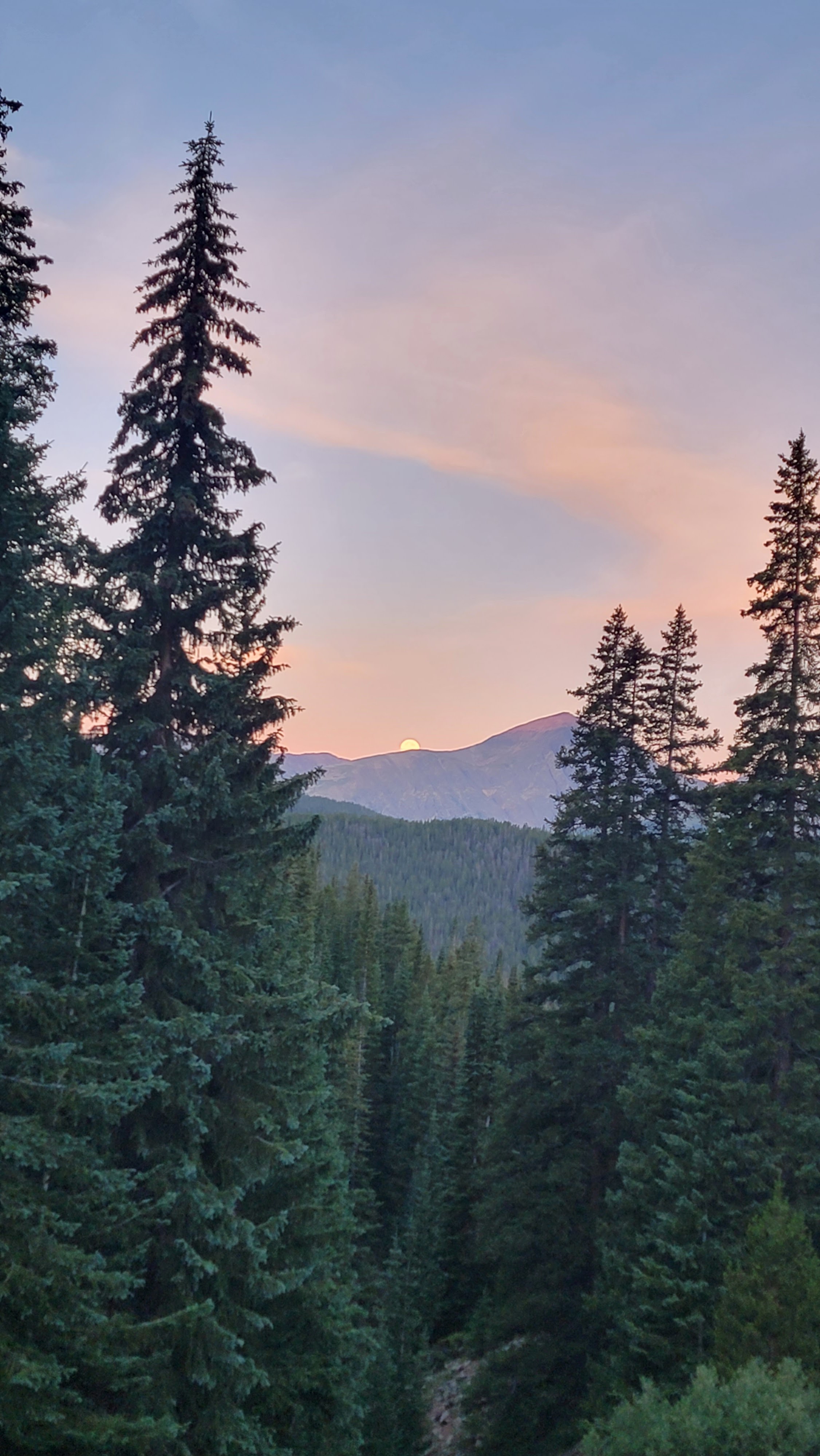 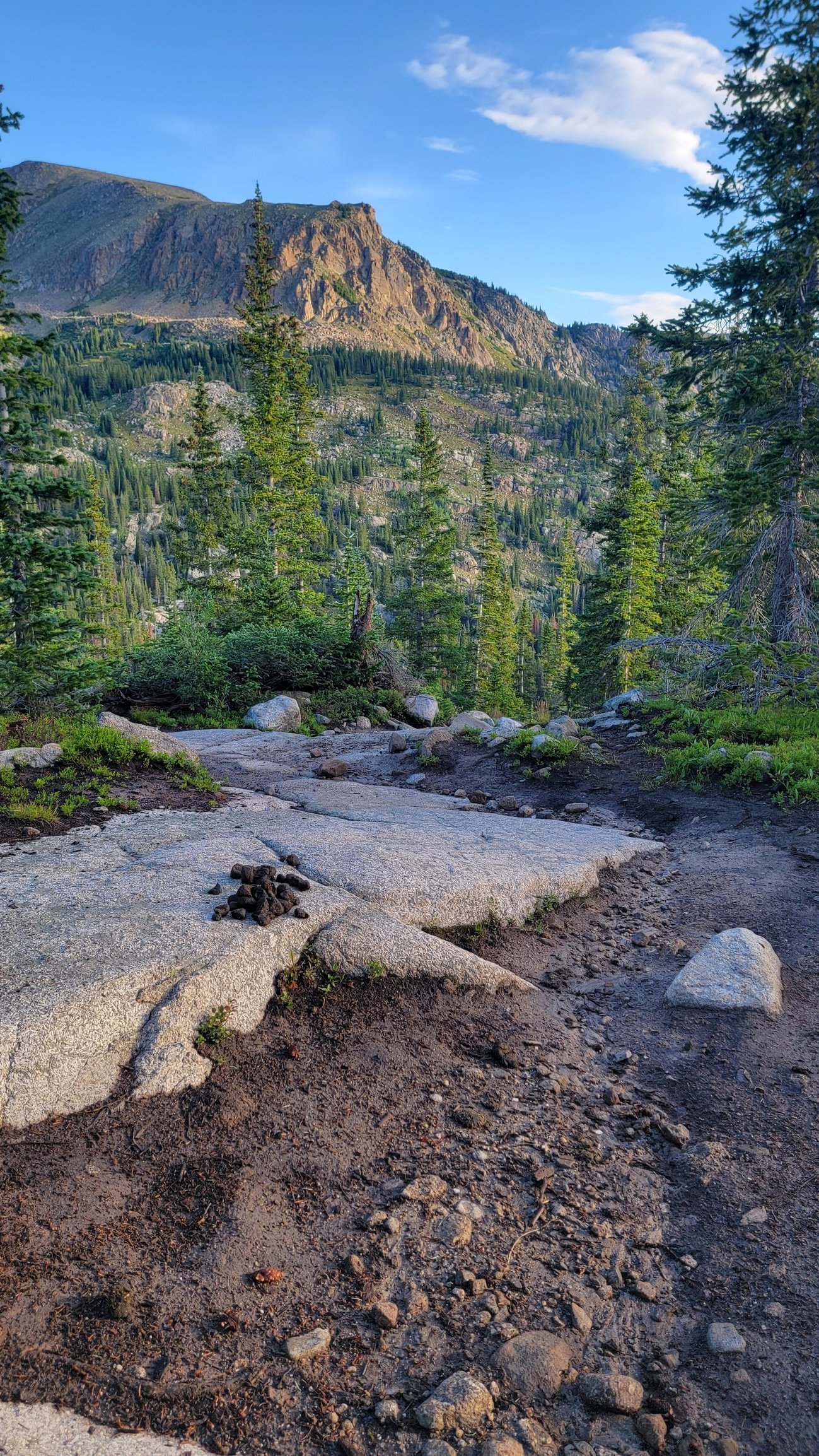 The first day of the trip wasn’t a great start, but it was a beautiful day. I started at Broome Hut near Winter Park, suffered in the heat for most of the day, and threw up three times. The next morning I was still a little sluggish but recovered throughout the day.  South of Keystone, I got caught in a hailstorm and heard rumbles of thunder while crossing under power lines in an open meadow, but thankfully I never saw any flashes. This was the wet/cold/dry/hot cycle I went through for most of the trip. After a cool morning, I crossed the Ten Mile Range above Breckenridge, and traversed across Copper during a hot afternoon. As I tried to crest the ridge and get a look at the route ahead, thunder and hail rolled in. The blue diamond route to Vail Pass was the  start of about 70 miles with the most fighting though brush of the trip. Even when it wasn’t raining, so much of the route went through drainages and along creeks that I was continually soaked. Most of my gear and clothing would dry out during the day, but my feet were almost constantly wet. 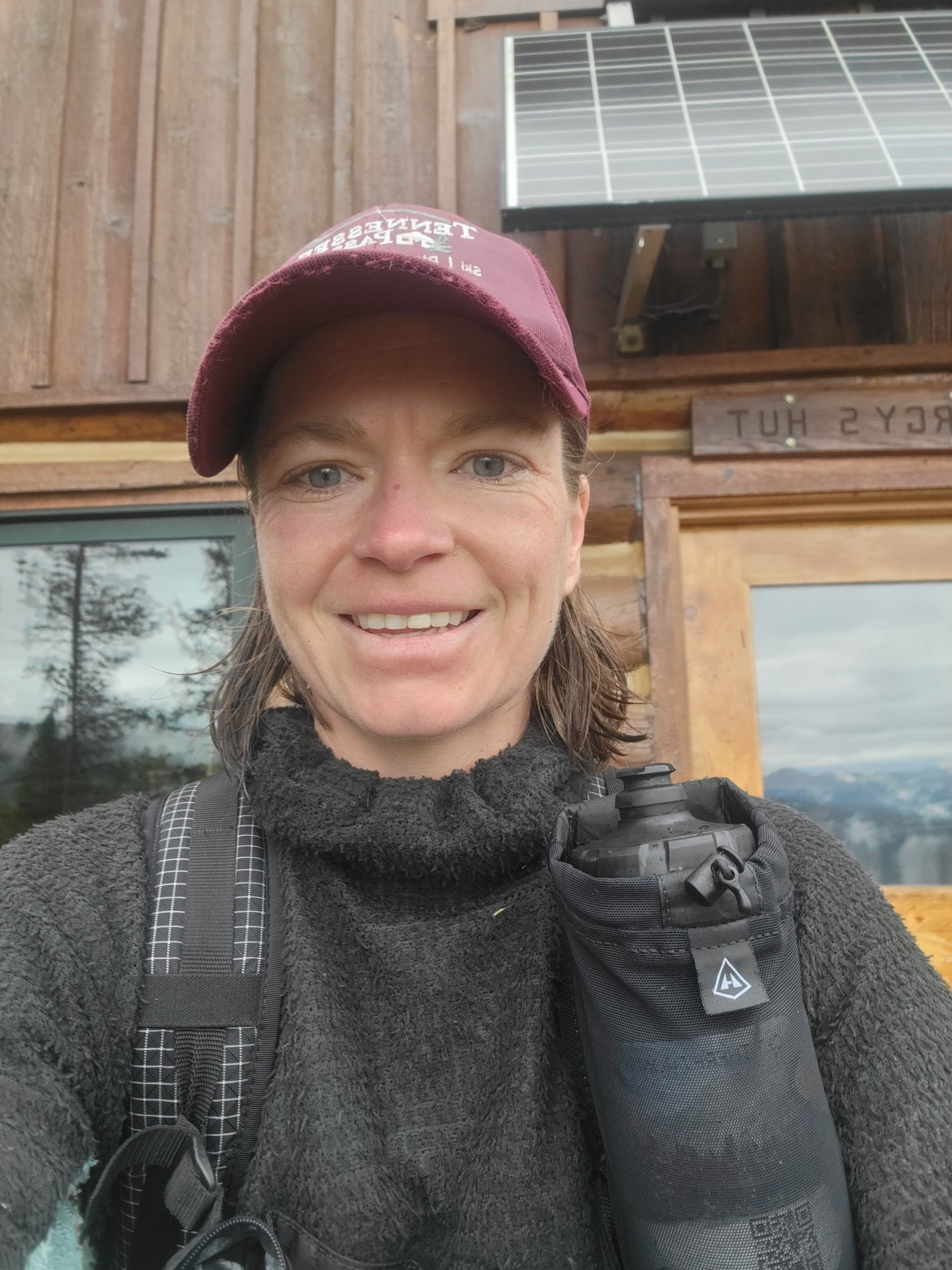 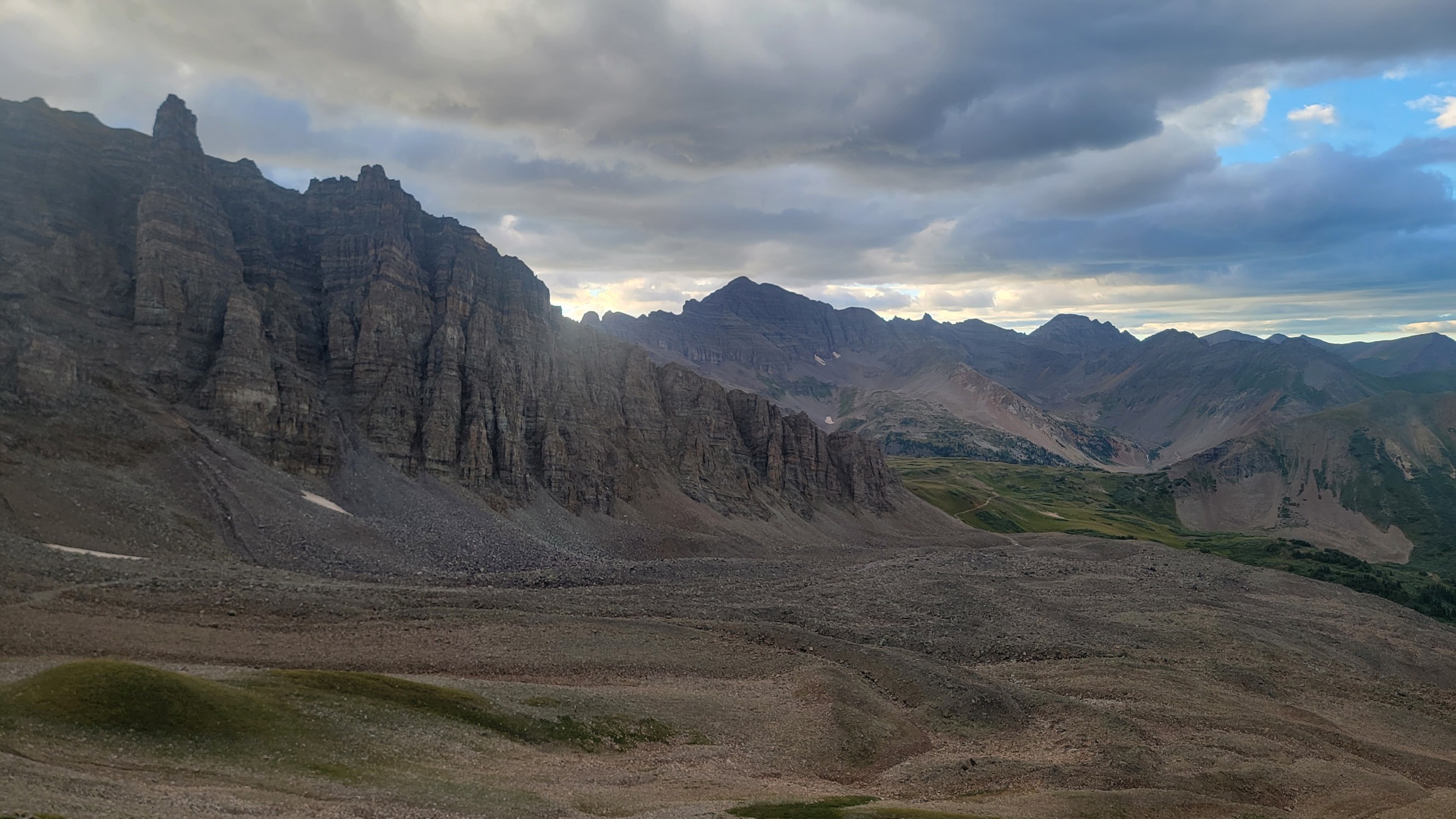 I crossed through open alpine meadows, dropped down into forests to the next ascent, and relished the remote terrain. During a long road walk, I got absolutely drenched in a storm while hearing thunder within a mile or two. My heels looked horrific with blisters after the deluge and I spent a wet and chilly night under my tarp. The route eased and I dried to merely damp with soaked feet as I headed towards Aspen. There weren’t any legal camping options after I picked up my maildrop, so I got fancy and had some giant pizza slices and a beer before heading to a lodge. The shower, bed, and space to dry out were super luxurious. I felt great when I left Aspen to start the 60-mile loop to the Braun Huts and got exactly the weather I needed to cross Pearl Pass and bushwhack to Friends Hut. The next morning, I started strong as I saw frost through an alpine meadow. By the afternoon, I was suffering with intense cramping pain in my lower right quad and had a rough night without water. I was a sight as I headed north from Aspen, barely able to walk up the road and filthy. The morning dog walkers weren't very friendly for some reason. I stopped to put some lcy Hot on my quad and finally took some Aleve. 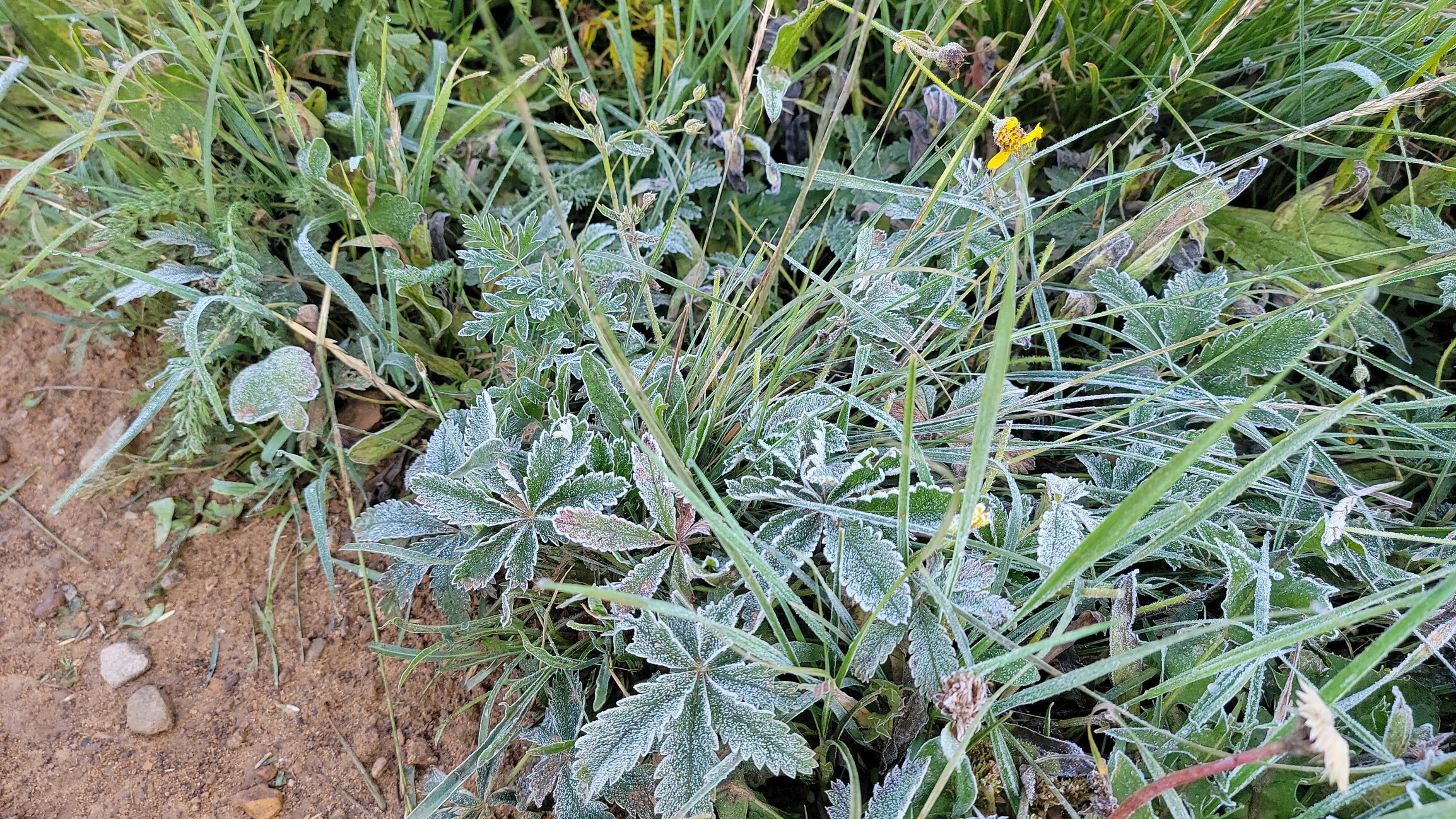 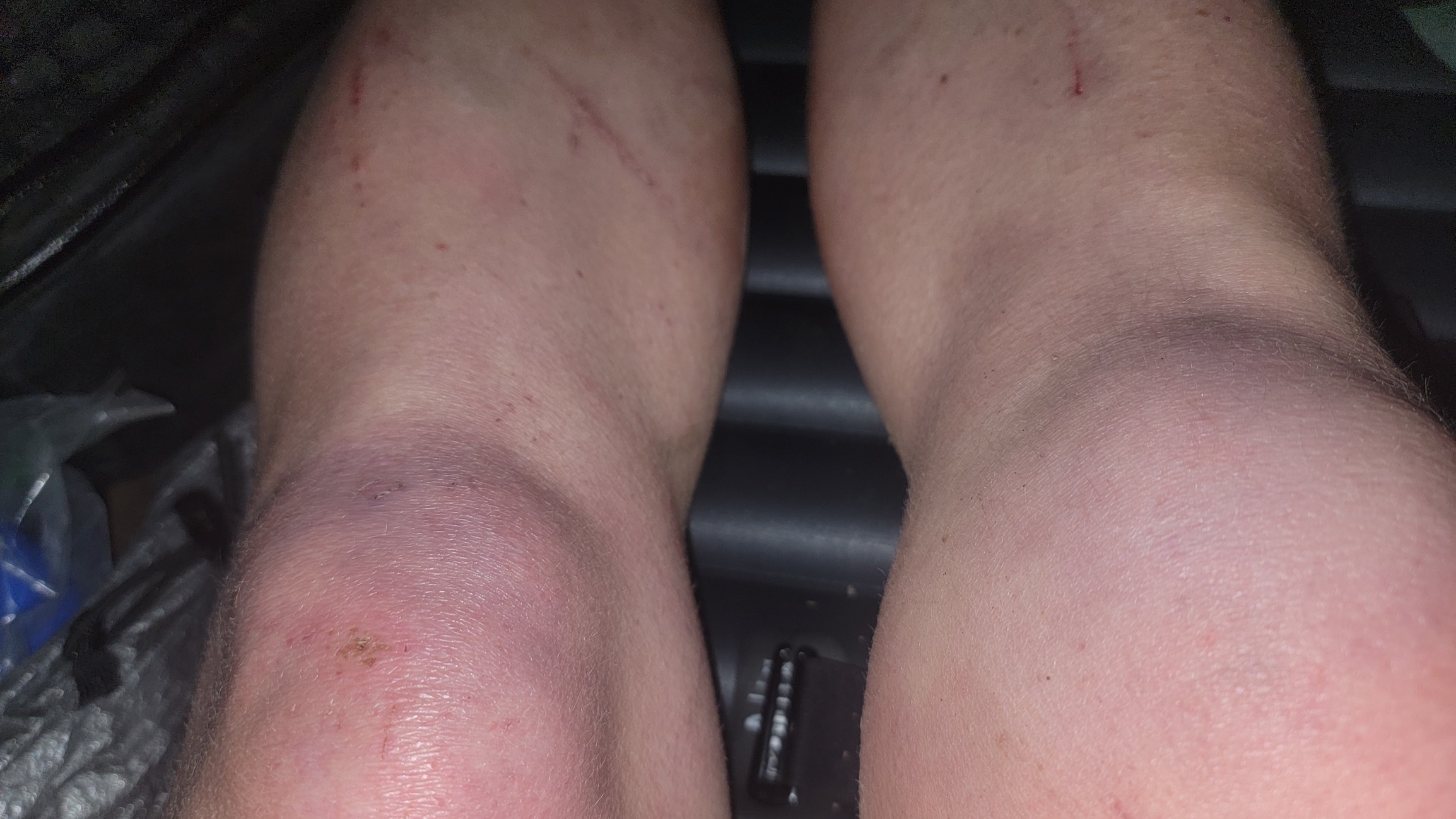 The wildflowers in the Aspen area were the best I’d seen on the trip. My quad still didn't feel great, but it had gotten much, much better since taking the Aleve. Once I made camp, I noticed my knee was twice the size of the left one. It didn't hurt at all when I wasn't moving and looked somewhat better when I woke up. I took some more Aleve because it was working. A rancher told me to tell his horses to come home if I saw them. Shortly after, I found them and spent a few minutes snapping selfies and petting the friendly horsies. I tried to follow a horse trail that didn’t seem to exist and slowly wandered up a creek. It was going incredibly poorly, so I cut uphill through spruce and fir until I found a blue diamond route. My leg hurt and I was just annoyed in general. After a slow and painful bushwhack through blowdowns and creek beds, I went head over heels into a briar patch. I expected to be bleeding from everywhere but escaped mostly unscathed. 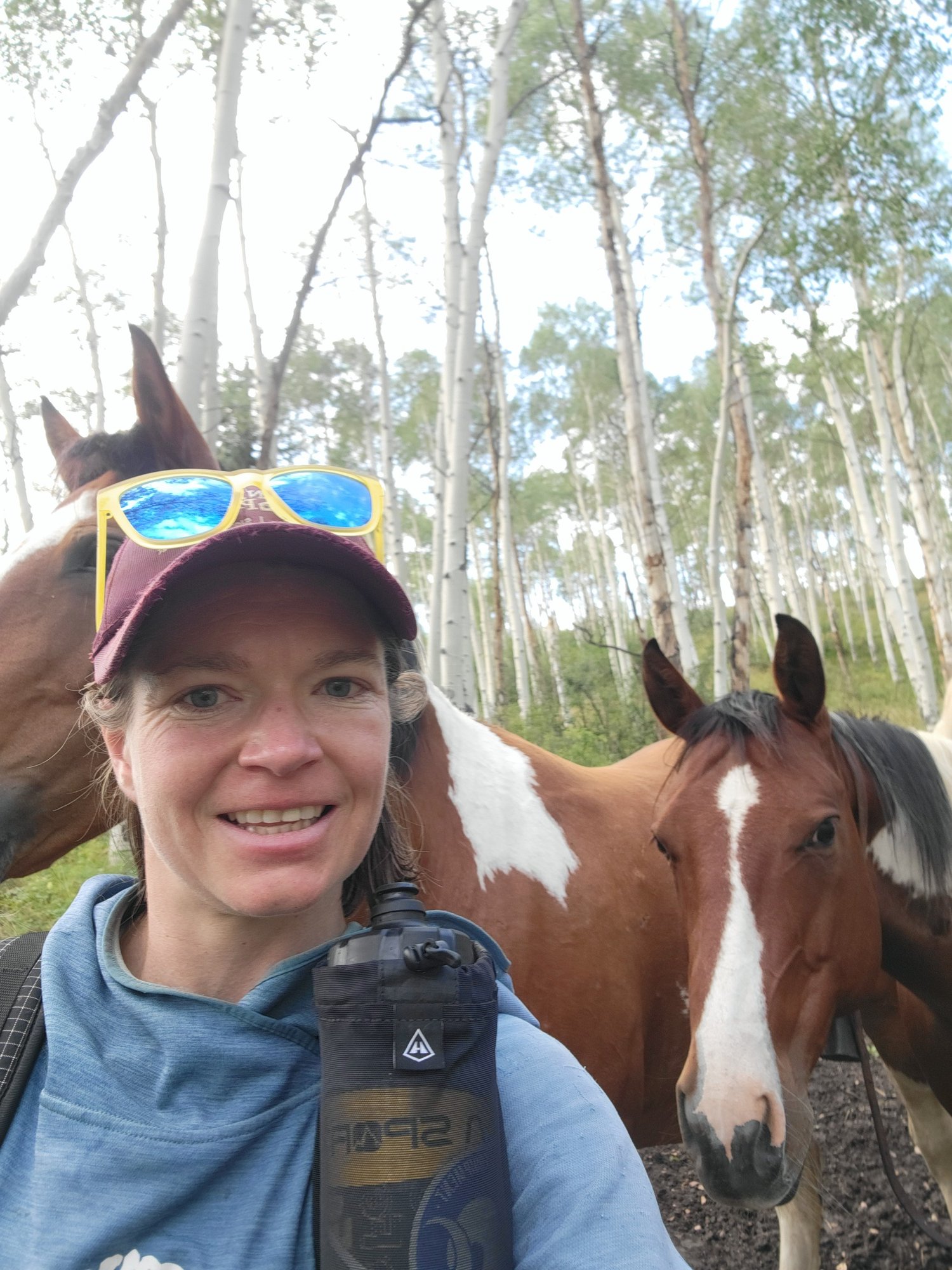 My last day felt like the reward for the work that I'd put in throughout the trip. I still got rained on for a couple hours in the morning, but then I got to a gas station and ate pizza and Cheddar Fries with strawberry milk. Along the rec path towards Edwards, I stopped for a beer and a burrito. Thinking about how I was down to single-digit miles left was surreal as I got a beer to have at the final hut. I had developed the same kind of pain that I'd had for the last four days in my right quad on the left. My right leg still hurt but had been looking and feeling better, so I didn't care. Most of the way left was dry, but of course, I had to get my feet soaked on the last stretch of hiking on a trail. All I could do was laugh. At 7:28 pm, I got to Eiseman. 36 huts, 322.8mi, 65,790’ of elevation gain over 11 days, 11 hours, and 2 minutes, I drank my beer on the deck and I was done. 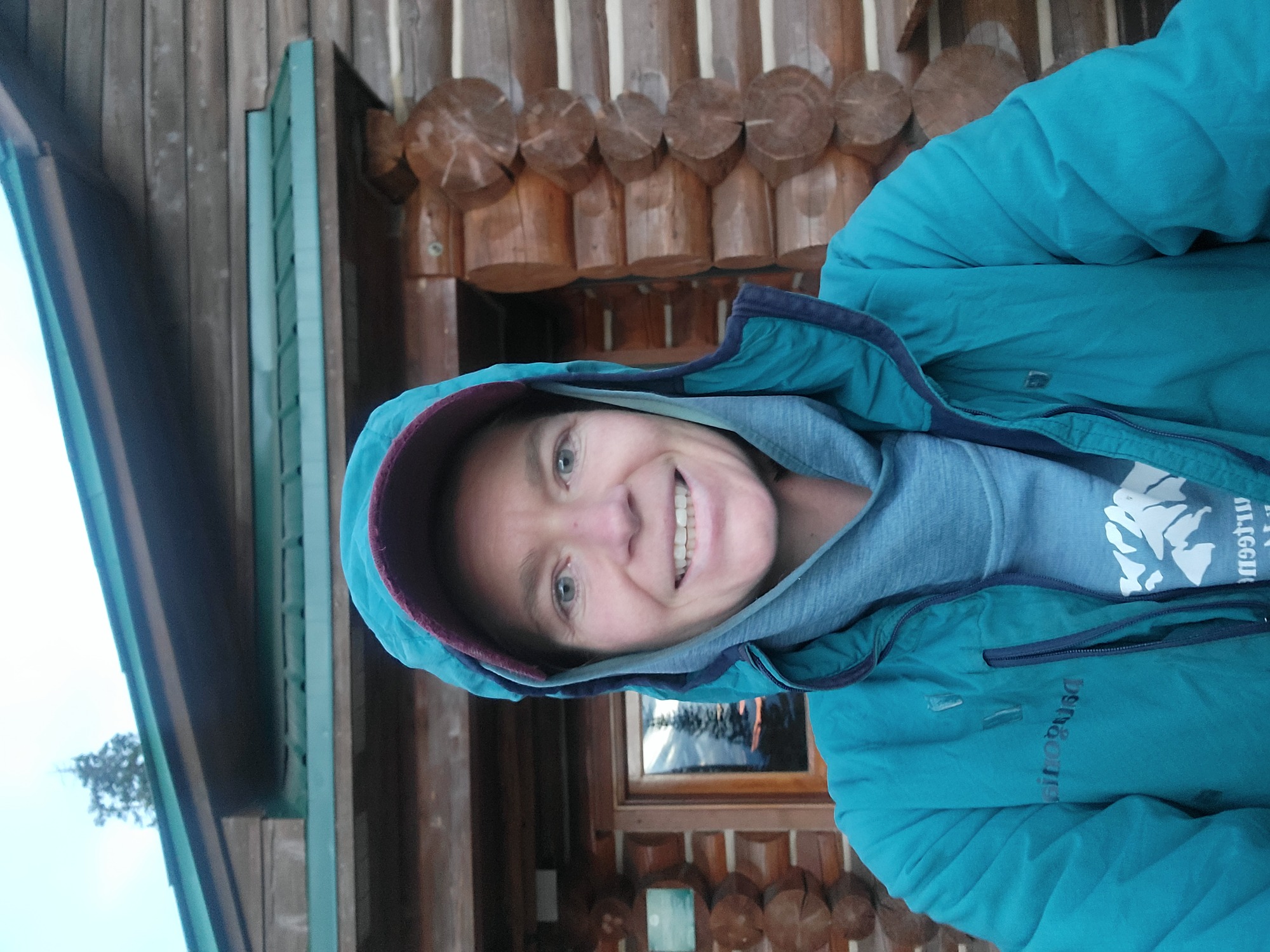 The route went off almost perfectly. I followed herd paths and read terrain well, quickly learning to take the path of least resistance over where the route was supposed to be. There was only one trail that I never found. It was both too hot and very rainy, but I got the weather above treeline I needed when I needed it. I averaged 26.9 miles per day over twelve days but paid the price with blisters on my heels, too many scratches to count, and intense quad pain over the last five days. 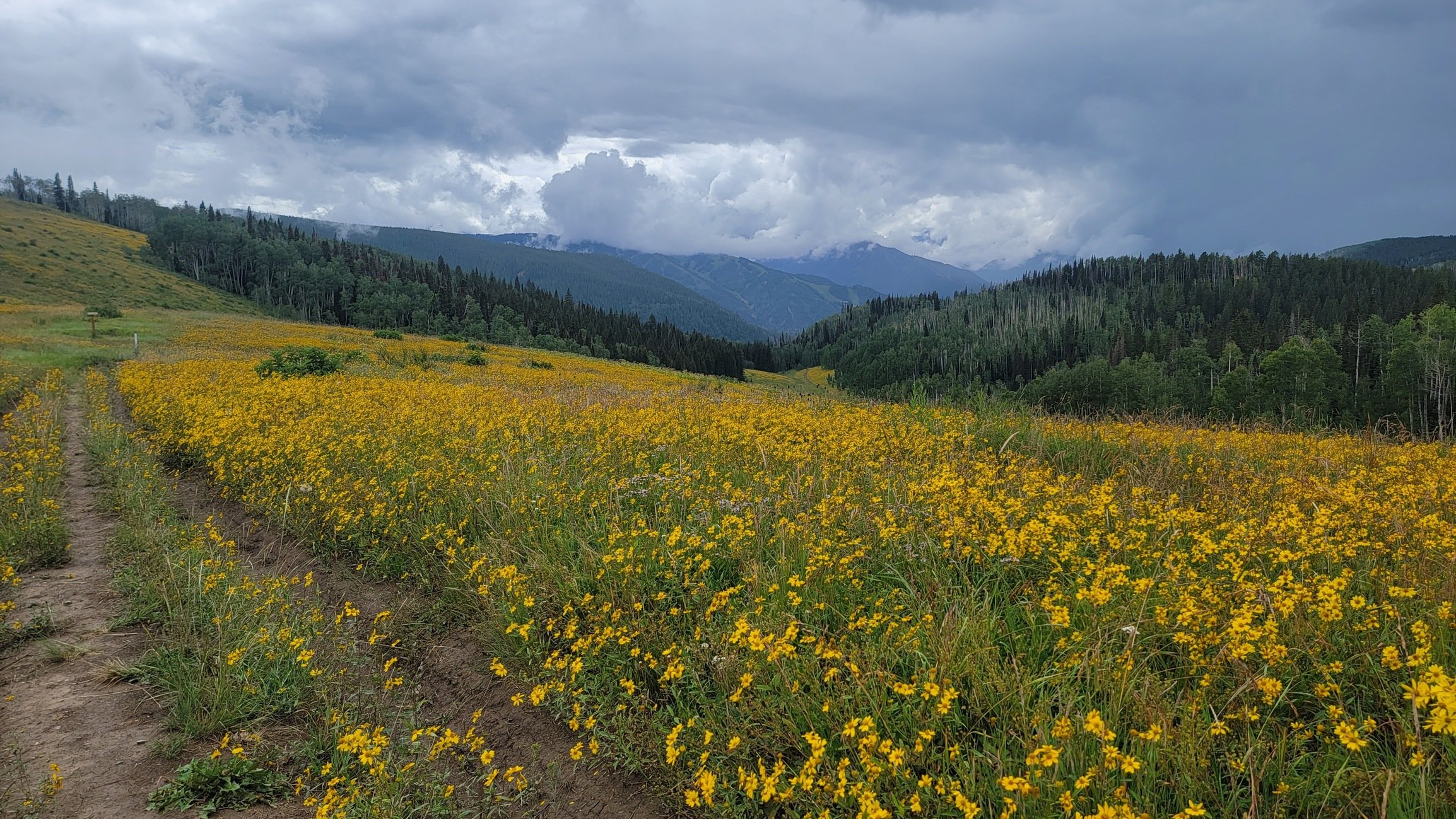 This is very much an evolving route. Since I completed the trip in August, there’s already been another hut added to the 10th Mountain system, the Emmelyn Hut. The Grand Huts Association is also planning to develop eight additional huts and a trail system extending north to Grand Lake near Rocky Mountain National Park. I got unlucky with the weather for Colorado, but planning the hike for later in August may result in drier conditions. Personally, I'd rather deal with cold than heat and rain. The huts still being single-party only booking was certainly understandable with COVID, but staying at some would’ve been nice. Most huts will return to the booking of individual spaces in the summer of 2023, marking a welcome return to communal experiences in the hut system. 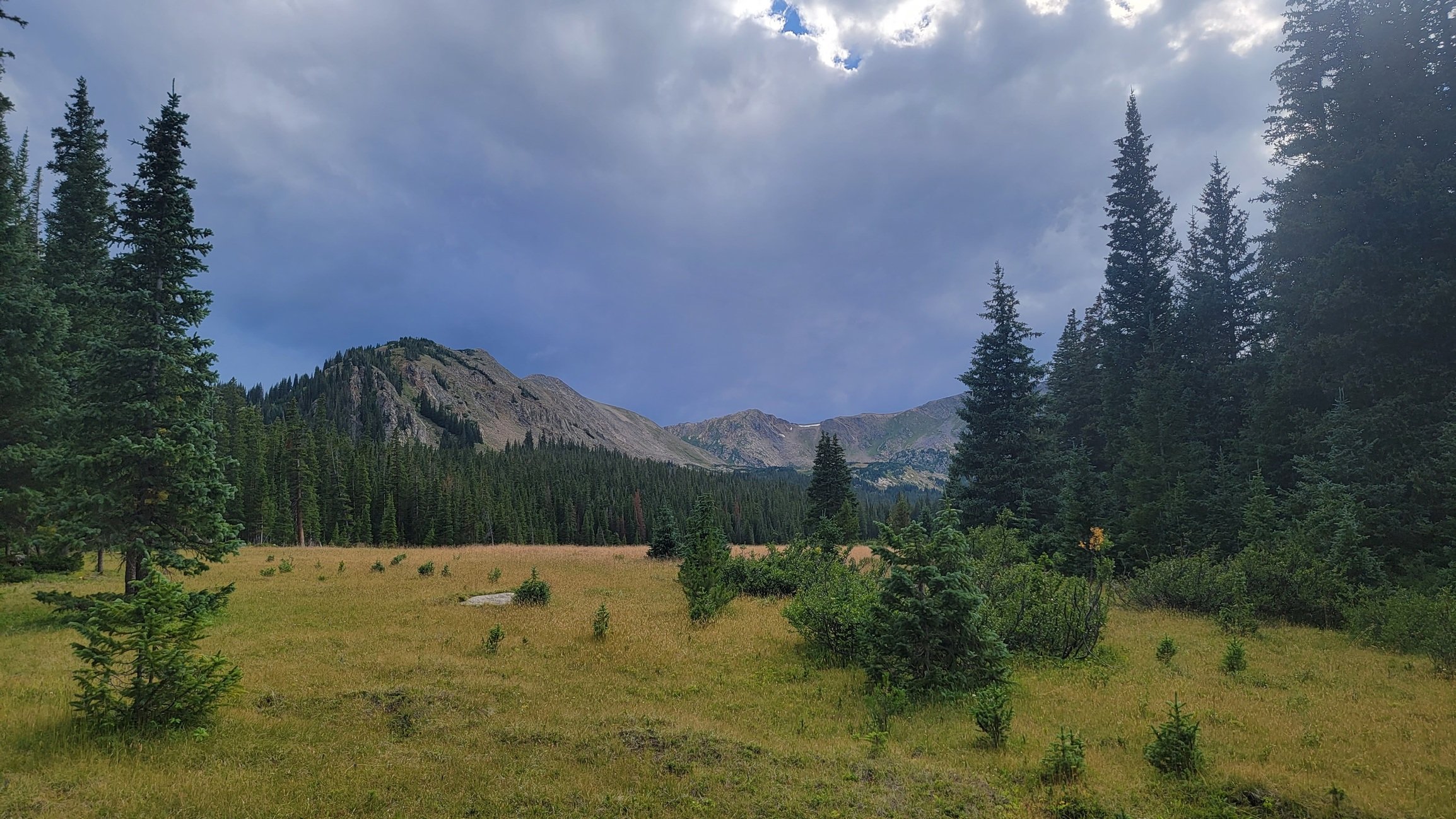 What do you think?!

For more about this trip, check out: https://www.gettherefromanywhere.com/10th-mountain-hut-to-hut