Our good friend and Tasmanian Correspondent, Shaun Mittwollen, was an early tester of our new backcountry ski pack, the Headwall 55. If you're unfamiliar with Shaun's work behind the camera, do yourself a favor and get familiar! Here he shares how he's getting along with the latest addition to his adventure kit with some stunning shots he captured out in the field. 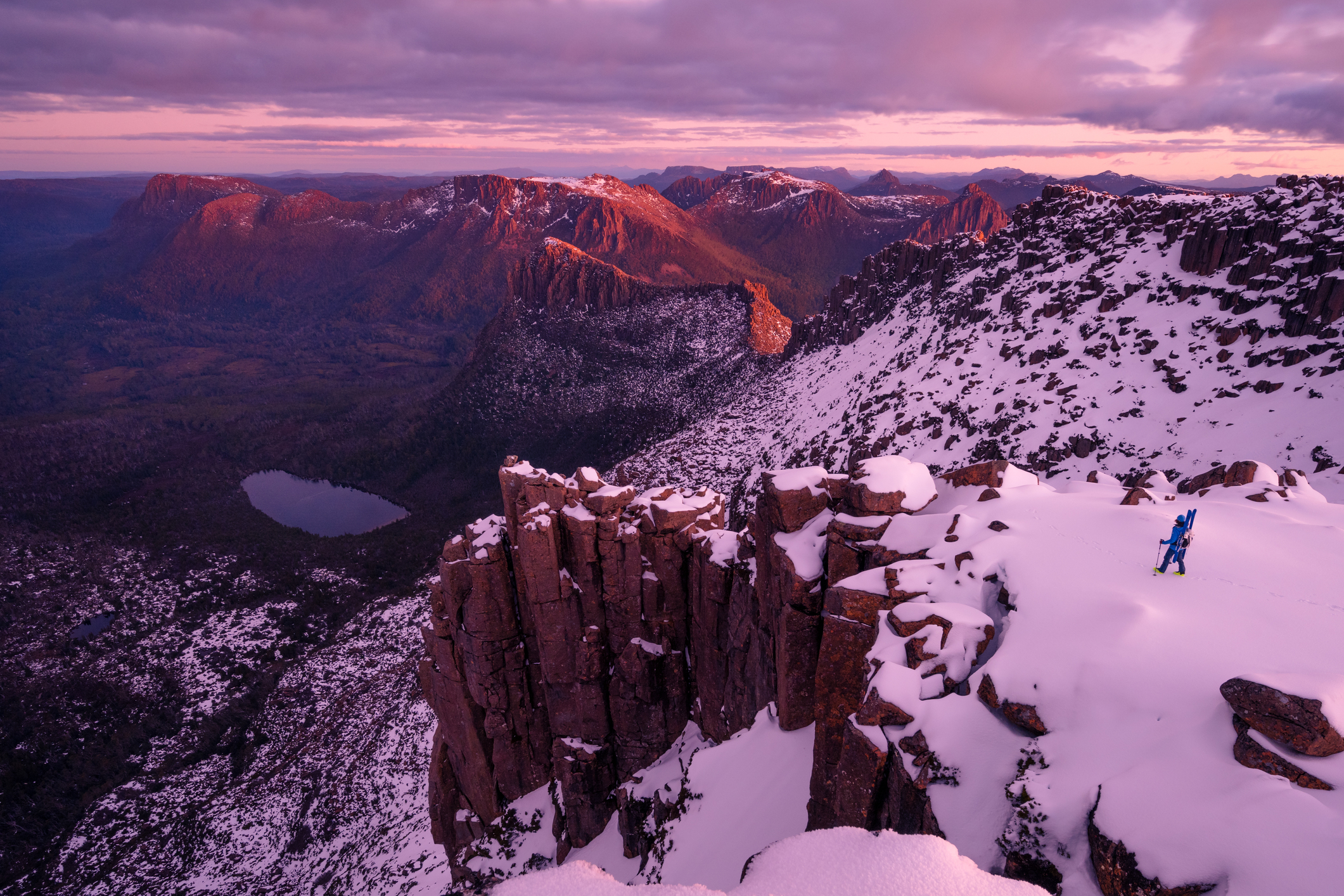 Like many others, I'm a big fan of Hyperlite Mountain Gear and have been using their packs and mids over several years amongst the Tasmanian mountains. I've noticed them grow in popularity as people trade in durable canvas packs for the sleek, ultralight options that facilitate ever-challenging goals. For me, the Porter Series packs have been my go-to for full-time guiding, exploratory ski expeditions, and winter storm chasing. These lightweight, water-resistant packs have allowed me to go further, reaching more extreme terrain while lessening the impact on my body. When HMG reached out to me to try a new ski-focused pack, I was intrigued to see what this variation offered over the versatile Porters. After months of testing this winter, I offered to write this review of the new ski pack both to give back to a sponsor that has provided me a lot of gear in the past and has always been stoked to see the results of my work. I thought it could also help those who might be seeking a new ski pack reach their decision.

The first thing that struck me about the Headwall 55 is that it's based around a 55l Porter with a sizeable external avy pocket and slightly different material. Given how much I use the Porter, it seemed like this pack would be an ideal evolution towards more ski-focused expeditions. High wear areas–like the sides and base–are heavily reinforced with fully-woven Dyneema and thus thicker than the equivalent Porter model. 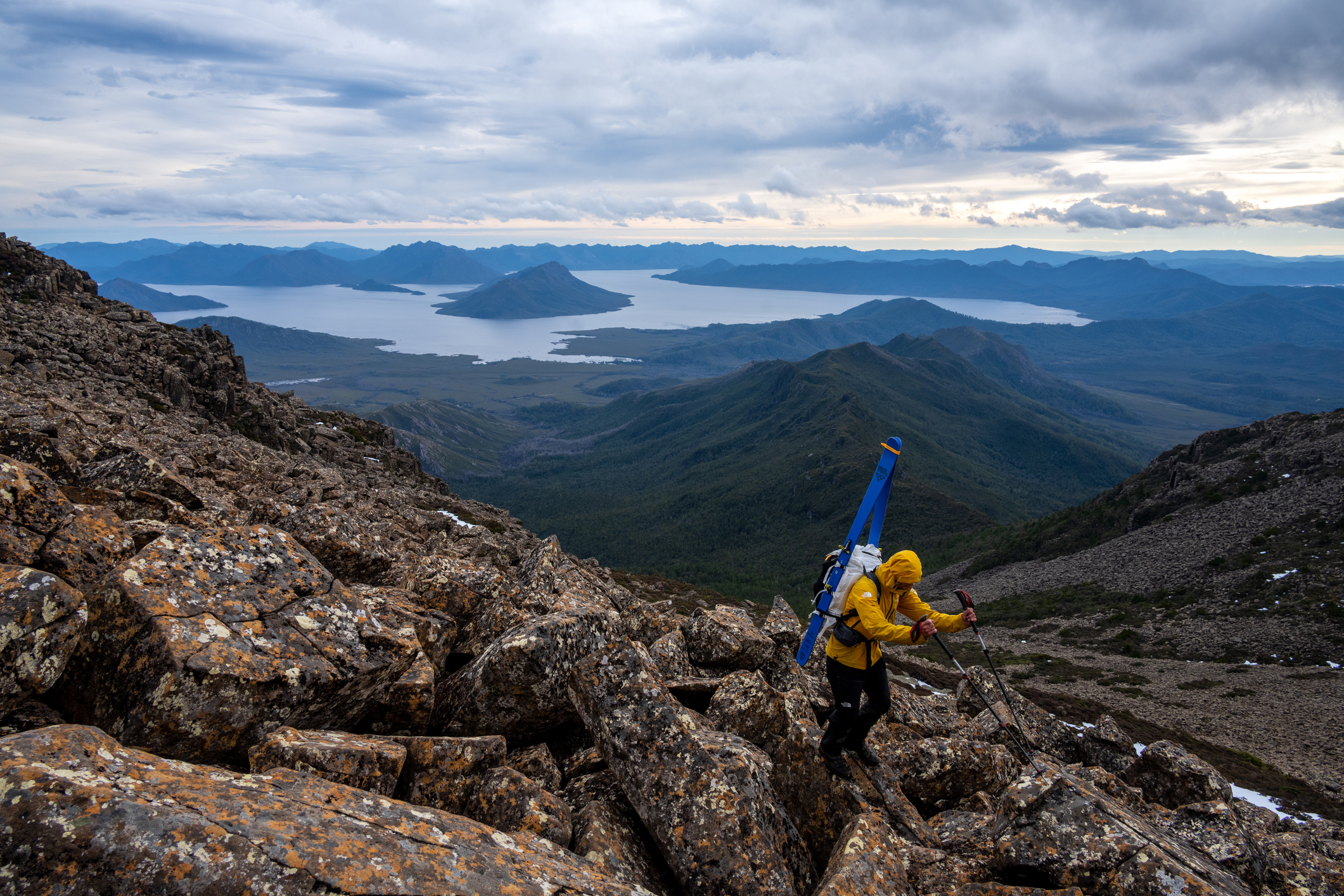 Previously, I've had sharp ski edges cut small holes in the sides of my packs when battling through scrub and jagged rocks (a solution for anyone in this situation is to tape the ski edges). However, the ski pack seems to have held up a lot better in this regard, with no punctures along the side panels–even after a lengthy period of ski edges potentially abrading the material. Overall, I was pleasantly surprised by the increased durability.

Another aspect of the ski pack I really appreciated is the triple side straps that run perpendicular to the vertical–one of the features I also really like about the Porter. The triple side straps create a really solid connection when side-carrying skis, and it is super easy to adjust their height. For example, when descending through boulder fields, I clip the rear binding under the middle buckle, so the skis sit higher and don't hit the rocks with each step-down. When heading through low bushes, if I'm not using my horizontal ski carry system (skis suspended horizontally on paracord), I drop the rear binding to the lowest buckle. 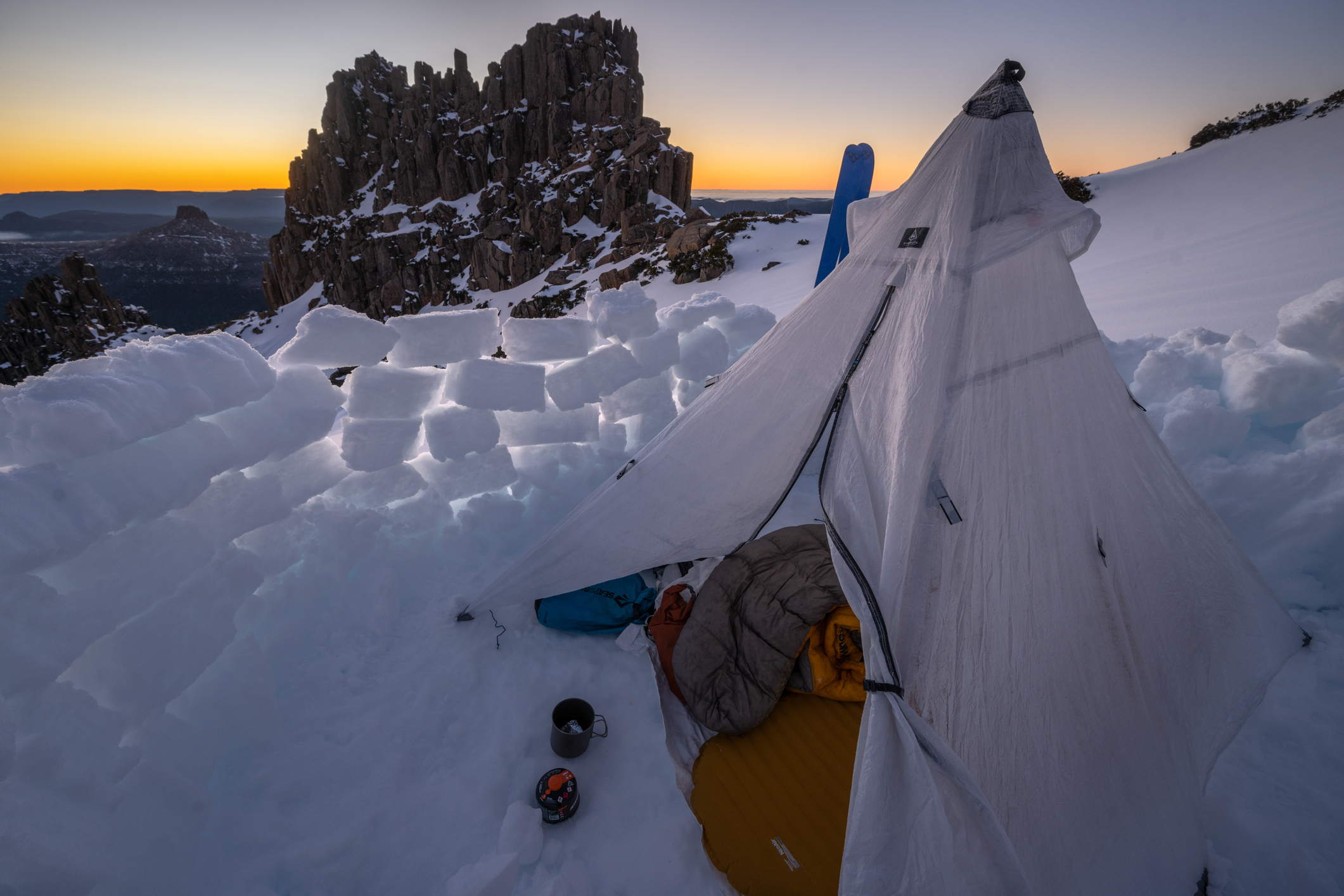 Under the external avy pocket, there are two slots for ice axe picks which are then secured with the side straps. I'm pleased to report that I can have the ice axes strapped in at the same time as the skis. I found this to be very useful for below-the-snow line approaches. Furthermore, there are three daisy chains down the outside and middle of the avy pocket, which can accommodate even more gear. Here I usually attach my tripod with Voile straps, but it's also a good spot to tie in crampons if you don't want them spiking things in the pack or other bulky items we often end up with on ski expeditions. So overall the pack has significant options for external attachments, at least equivalent to the Porter, if not even more.

Regarding pack size, at 55l, I've found it to be quite versatile. There is one large internal pocket that swallows up quite a bit of gear. I've used it cinched down on gear-intensive day trips and multi-day ski expeditions with significant approaches below the snow line. In one case, on an outing to Mt Ossa, I managed to just squeeze my touring boots in the avy pocket with a shovel and handle. Then the main compartment held the food, my UltaMid, my sleep system, and extra clothes for up to 3/4 days. With a more traditional ski touring trip where you don't need to carry ski boots in the pack, you could easily get away with cramming a week's worth of supplies in there. I've found I can store a bit more gear at the bottom level of the pack below the avy pocket; however, the central portion of the main compartment can get slightly squeezed when the avy pocket is full. 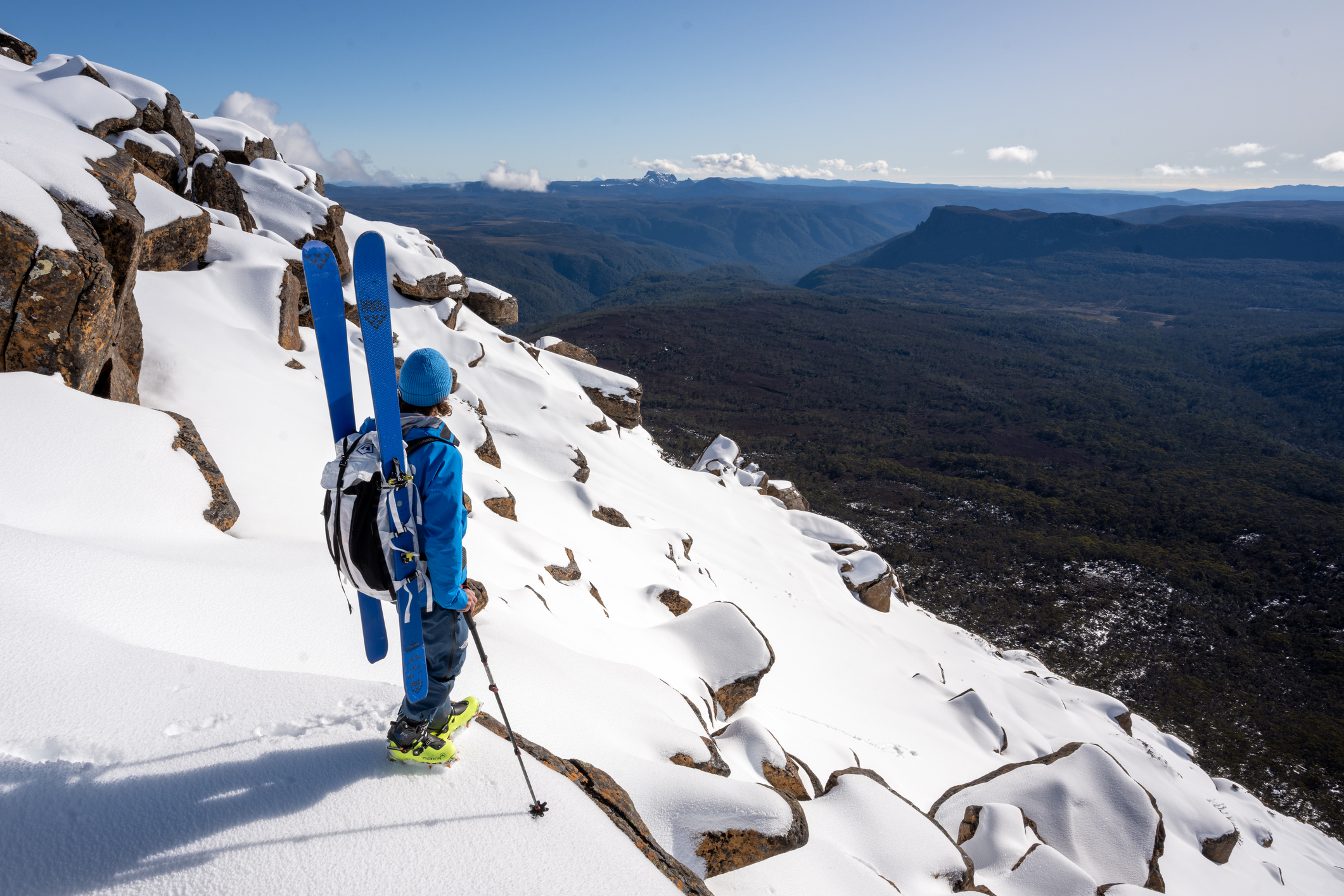 The main compartment of the pack also has the obligatory little zippered pocket found in HMG packs. I've never bonded well with the little pocket. It's hard to access when the pack is stuffed full, but then again, it's also a good spot to store small loose items. With the roll-top closure, you can also push the limits of the pack's capacity quite a bit, but it can get a bit top-heavy if you overstuff it.

Moving back to the outside of the pack, I was super impressed with the avy pocket. It can fit a large amount of gear as it is made with stretchy material in parts and can expand significantly. I do feel one must be careful with the black stretchy panels of the avy pocket. These feel like they would be easily damaged by sharp equipment or abrasion. Luckily, they only make up two slim strips on the side. And the expandability of the avy pocket makes this risk worthwhile. 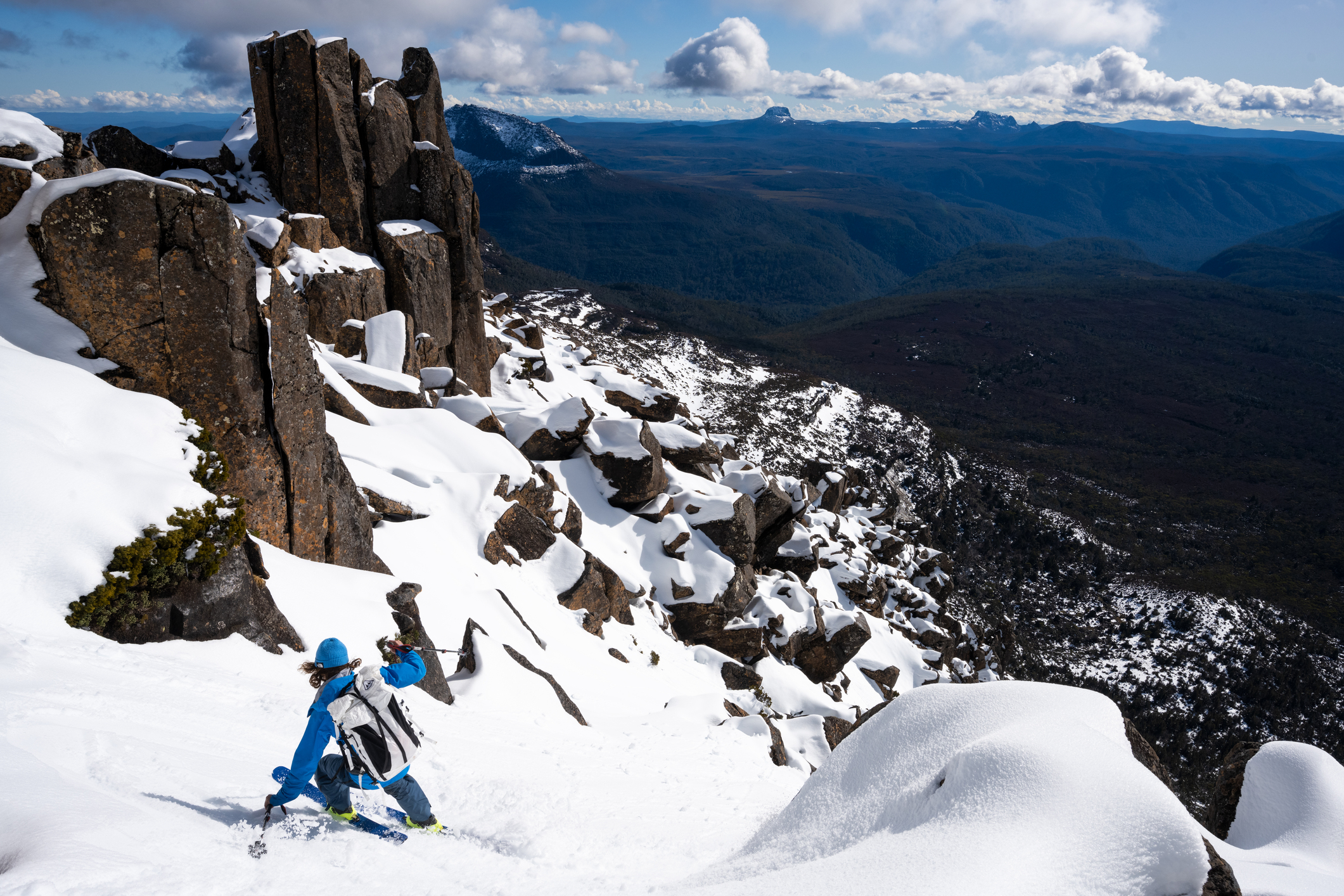 The framing of the ski pack follows suit with other Hyperlite packs, with aluminum supports running down the inside. I've found this to be particularly comfortable vs. more bulky framed packs as the back panel conforms well to my back while still having enough padding not to feel the contents inside. I'm 178cm, 68kg, and run the medium size. Similar to other HMG packs I've used, I've found the comfortable weight limit to be around 20kg or so. But then again, I've never carried a pack loaded with more than 20kg that hasn't been a burden.

The shoulder straps have an ideal amount of padding for me, and some attachments for a few small items or the horizontal ski carry system. It's also possible to hang the Camera Pod off here, which is awesome for fast access whilst hiking in foul weather. I usually hang a few plastic carabiners here for fast attachments. I've captured a lot of photos I would have otherwise missed in this configuration if I had the camera stashed inside the pack itself.

The hip belt has the two classic little zippered pockets. At first, I thought I'd prefer one gear loop and one pocket; however, after having used the pack, I changed my mind. The pockets are great for stashing quick-access items such as muesli bars, gels, hand warmers, an inReach, head torch, and phone. I can fit all of this, plus my sunnies. It should be noted that I don't think very large phones will fit in the pockets. My iPhone SE (old version) fits in there just fine, though. 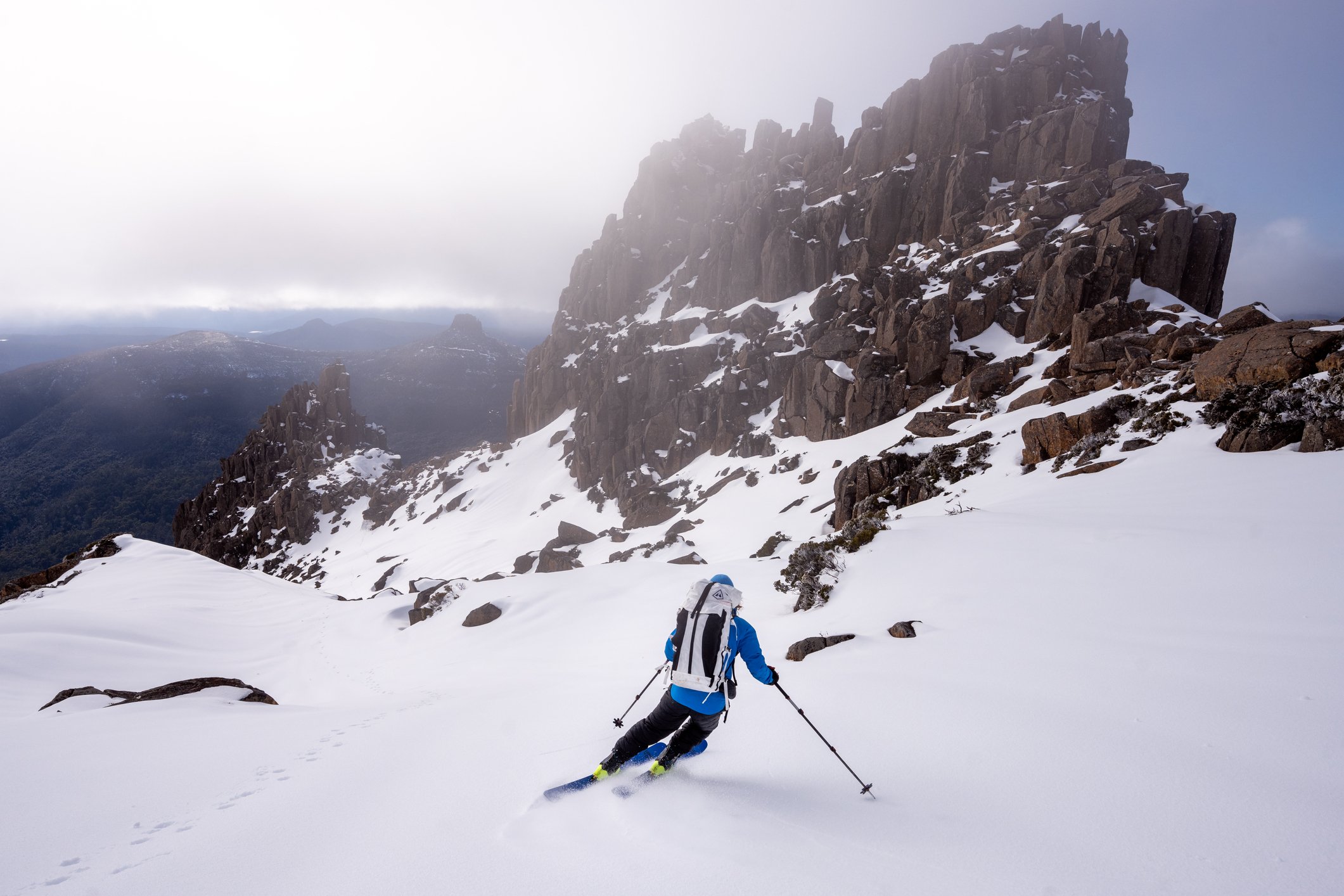 So overall, the ski pack has tons of versatility. It's great for gear-intensive day trips and multi-day expeditions for up to a week or so. But would I consider the pack day riding in a resort? After several weeks of riding the club fields in New Zealand, I feel the pack is too big for resort riding. Even though it can be cinched down when carrying only small amounts of items, it's still a little too floppy and wide for my tastes. I reckon there is room in the HMG lineup for a smaller version that would work well as a single-day/resort riding pack. Something between 20-30l would be perfect with a smaller volume avy pocket.

There you have it! The new Hyperlite Mountain Gear Headwall 55. Another good addition to the lineup from Hyperlite–one which builds on the versatility of the Porter in a ski-specific manner but is also equally at home backpacking around the world (fits well into a plane overhead locker) or on multi-day hikes. Ski specific, I feel the pack is perfect for one to three-day gear-intensive missions or two to seven days with a purely on-snow approach. The features are well thought out and simple to use. There are tons of external attachments and what seems like a durability enhancement on the original Dyneema build. While I wouldn't be selecting the pack for day riding in a resort or very short single-day ski tours, it's perfect otherwise.