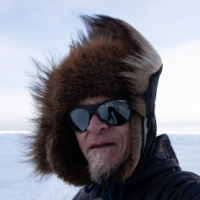 A wet sucking sound accompanied each step as I lifted my foot up and out of the spongy tundra. I’d then test the space between the pillowy jack-o’-lantern sized tussocks to locate the least-wet place to set my foot, then heave my laden fat-bike forward before taking the next sloppy, energy-draining step. Forward progress was painfully slow through the sub-Arctic mire. I scanned the rolling terrain ahead in search of a less energy consuming path. Nothing but miles of soggy tundra met my gaze. Intense exhaustion and an acute swelling pain in my knee threatened to overwhelm me. Internally, I worried that I had overshot my abilities with this wilderness cycling route that involved a lot of bike-pushing.

For more than two thirds of my life I have been an outdoor adventurer, which is to say that I have a deep familiarity with “bonking.” I know what drained depletion and ravenous hunger feel like. On long trips, my strategy had always been to eat frequent, high carbohydrate snacks to recharge my flagging blood sugar. When and if snacks ran low or were entirely consumed, all thoughts focused on food and the next resupply.

Over the years, I had grown used to achy joints and exhaustion, but as I looked up at the miles of post-holing ahead of me, I felt a fatigue deeper and more concerning than usual. When I returned home from the trip, I visited the clinic for a checkup, and to have a blood panel done. The results were sobering. I was overweight, developing metabolic syndrome and, most alarming, I was becoming insulin resistant - the early signs of developing type 2 diabetes. My yearning for strenuous backcountry adventures was still strong, but it seemed as though the clock had been accelerated and that my days of adventure may soon be reined in.

I began to search for solutions that would allow me to maintain my active lifestyle and regain optimal health. The approach that I had always followed was causing me to gain several pounds of body fat each year, my stamina and strength no longer felt optimal, joints ached, and I was becoming insulin resistant. Something had to change, but I had no clear idea where to begin.

Through luck, coincidence and one compelling presentation about decolonization and ancestral wisdom, I found what I consider to be nothing less than a miracle solution to the spectrum of ailments that plagued me. I stumbled across what it means to become a metabolically flexible fat burner, through ancestral nutrition.

Digging into this line of investigation, I found a bottomless and wildly fascinating rabbit hole. Ancient ways of living and eating, that worked for our species for hundreds of thousands of years, are now being justified and supported by burgeoning science. More importantly, however, tens of thousands of individuals, like myself, who have reached dead ends with the modern standard of care, are self-experimenting with this way of eating and are course correcting away from the diseases of civilization.

As I began to peer under the first onion layers, I started to comprehend that we are a species of hominid that has lived in direct contact with the natural world for the absolute majority of our time on the planet. It struck me that I had never had the imagination or bothered to consider, what is a species appropriate diet for humans?

Our ancestors, I began to understand, ate what they could kill, scavenge, or forage, and often underwent protracted periods without eating. Human beings are the surviving members in a branch of primates that, over millions of years, gradually adapted away from big biota filled guts, which require continuous feeding, and that can extract nutrition from plant fiber. When our ancient ancestors moved out of the trees and into the savanna, several million years ago, we began consuming animal protein and fat. The big guts shrank and were slowly exchanged for big brains. This is called the expensive tissue hypothesis.

Our genes have not changed in any significant way since the Agricultural Revolution, some ten thousand years ago (depending on what region of the world your ancestors are from). Our diets, however, have increasingly diverged from the rich and varied nutrition and eating patterns our species has been programmed, over hundreds of thousands of years, to thrive with. This nutritional divergence has further accelerated over the last 50 or so years. High fructose corn syrup industrially processed and highly inflammatory seed oils (canola, soy, peanut, corn, vegetable, etc), and other hyper-palatable, nutrient-poor, center-aisle food-like products are all modern additions to the human diet -- none of which our ancestors would recognize as food.

It is sobering to consider that over 55% of Americans are either diabetic or pre-diabetic; that roughly 70% are either overweight or obese; and that only 12% of American adults are considered metabolically healthy. This way of eating has given me a fighting chance in avoiding becoming another member in these grim statistics.

At the outset of my dietary experimentation, I struggled with the idea that the goal should be to consume the majority of my calories from fat and to dramatically restrict carbohydrates. Although I grew up in Alaska and knew that all Indigenous Alaskans had eaten this way for thousands of years, my Western conditioning was deeply ingrained. A light went on for me, however, when I first read that of the three macronutrients (fat, protein, and carbohydrates) that there is no such thing as an *essential carbohydrate.

Certain cells in our bodies absolutely require glucose to function, but if you never ate another Snickers, slice of bread or bowl of rice for the rest of your life, those cells would function perfectly. Human bodies can manufacture all the glucose they need. Human beings cannot function, however, for long, without essential fatty acids, essential amino acids, essential vitamins, and minerals.

When I began to consume a high fat/low carbohydrate diet, a few fascinating and profound things began to occur, which led me to believe that I was on the right path. One of the first things I noticed was that I immediately lost several pounds of water weight that I had no idea why I was carrying around. Every gram of carbohydrate in our bodies, it turns out, is supported by three grams of water. Once I ditched the carbs, this water was excreted. I felt lighter and my joints hurt less. The next thing I noticed was that I was off the blood sugar roller coaster, and I could go and go for many hours between meals without experiencing the familiar and dreaded bonk.

In most cases, people who prioritize healthy fats and protein as the cornerstone of their diet, adopt intermittent fasting or time restricted eating patterns. Healthy fats and protein are satiating and once the body remembers how to extract energy from these substrates, by becoming fat adapted (also known as keto adapted), the hormone insulin drops, and a cascade of fascinating things begin to happen.

When insulin is present, we cannot tap into our stored body fat for energy because insulin is a storage hormone. By abstaining from snacks and meal frequency, and by greatly reducing carbohydrates, insulin drops. With insulin levels low, our bodies can then tap back into our fat stores to use for energy.

This is the remarkable adaptive strategy that allowed our Paleolithic ancestors to survive times of hardship, and this is the cornerstone of what it means to become metabolically flexible: we eat nutritious food and extract energy from it, but when we don’t eat, our fat-burning mitochondria begin to pull the fat off our bodies and use it for fuel without discrimination or unnecessary hunger pangs. Furthermore, our brain function and moods improve when we are off the blood sugar roller coaster and rely on ketones, rather than glucose, for the primary fuel source.

As the first weeks and months went by, I began to experiment. I found it hard to believe that my body could run on its own storage fuel, and that losing excess body fat could be so simple. 16-to-24-hour fasts (skipping breakfast and or breakfast and lunch) eventually became reflexive for me at home, but I wondered how I’d perform on bike trips. Breakfast had always been a morning ritual before starting long days on the saddle, and my Western conditioning about breakfast being the most important meal of the day was deeply ingrained.

Much to my surprise and delight, I was able to get going with nothing more than a cup of black coffee, then ride well into the day before feeling the urge to eat my first meal. I was elated to discover that I had conditioned my metabolism to run on fat rather than carbohydrates.

Two years in, I still marvel at the fact that, with practice and discipline, I was able to return to my ancestral programming, and am now able to use both exogenous and endogenous calories for fuel. I am no longer a glucose slave and I take great satisfaction when I consider that my body has remembered how to use its built-in surplus for the energy it needs when it needs it. I feel like I have a superpower.

This spring, I returned to the clinic for another checkup and to have blood work done again. I had lost more than 30 pounds; my insulin resistance had reverted to healthy insulin sensitive levels and my markers for metabolic dysfunction had been greatly improved. I had dodged an all too-common bullet.

I do not consider this way of eating to be a diet. The word diet denotes something to do temporarily but expect to go off. I intend to eat and fast this way for the rest of my life. There is still a lot to learn and certain tweaks to be made, but becoming metabolically flexible has made too many profound improvements in my life to list. I can no longer imagine returning to the diseased state I had been in for the meagre reward of a quick dopamine rush from sugars, industrial seed oils and highly refined carbohydrates.

Single ingredient, whole foods are now at the foundation of what I eat, and much of what I eat is wild-caught fish and game that I procure myself. This is one of the great joys of living in Alaska – a state that, up to now, has prioritized and managed its healthy renewable resources. When my freezer and pantry run low on wild-caught or foraged food, I do my best to purchase regeneratively and local-raised/grown food.

Although I now eat far fewer meals than I used to, every meal I eat is delicious, and I eat to satiety. However, I am not a zealot. In Mark Session’s book, The Primal Blueprint, he states that we should aim high, but accept that 80% adherence is more reasonable. Conscious treats (not cheats) should be factored into a life worth living.

We have become conditioned by modernity and culture to believe that grocery stores, supermarkets, and all that they contain, are normal. Highly subsidized grains and monoculture agriculture has wildly transformed our diets over the last half century. Most of us have some idea about which foods are more-or-less healthy or nutritious, but I for one had never considered just how many of these foods can be deleterious to long life and robust health. If and when I feel deprived, I consider what my future self will say about the choices I make now to remain in or to slip away from metabolic health.

Mountaineering, paddling, bike expeditions and wilderness exploration are embedded into my identity and are the sacred methods I use to recharge my being. I am open-eyed and under no illusion, however, that someday I will have to reign in expectations about my limits in the backcountry. Relying on ancestral wisdom to break bad habits and rediscover optimal health has provided me with a new lease. My only regret is that I didn’t learn about metabolic flexibility sooner.